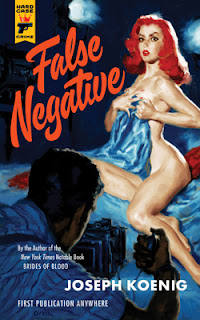 I often bitch about how some books are not “crime” enough and with this one I certainly got big dosage of it! We follow this guy Adam Jordan who is crime newspaperman and fucks up one job big time, but also big time funny and even educational: “Professor Einstein could learn a thing or two from Adam Jordan. It was not impossible to be in two places at the same time, if no one checked.”  Anyways, he then becomes writer because “we pay better since good crime writers are harder to find than inventive killers.” In one of the numerous sub-plots his editor gets killed so eventually he takes over managing of Real Detective magazine. So, you see, everything is related to crime one way or another so I really cannot complain about it on this occasion.

There is of course one main plot although we are never sure if others are connected. It starts with Jordan finding beautiful dead girl on the beach. At first he’s not too interested but later he needs some story for his editor and starts digging into the case. Needles to say that deeper he digs more dirt comes out in the open. And more corpses of (mostly) beautiful women.

Nothing and nobody is simply black and white here. Everything is gray and in pretty fucking dark shades of gray I might add. That includes our hero who is likeable but nevertheless opportunistic bastard who lives off other people’s misfortunes. We have sleazy photographer, beauty pageant queens with price tags all over them, incredibly cynical (and hysterically funny) editor, hookers, pimps, mobsters etc. Even the only good person freely admits she'll do what it takes to meet the right people. There’s a nice touch at the end when murderer stoically replies to Jordan that he’s no better or worse than him as they are all just predators and vultures. I’m sure Raymond Chandler was smiling approvingly when reading this in heaven.

But as brilliant as story is and colorful as characters are, for me sheer genius of this masterpiece lies in its style. I was amazed to learn that it was published only recently for the first time because language used and overall atmosphere is totally good-old hard boiled times. City of course is as an asphalt jungle, cops are dirty, there’s still racial segregation and there's lots of jazz. Our hero is a fan and he frequently visits gigs of Charlie Parker, Billie Holliday, Mingus and likes. Louis Armstrong himself even appears in one of the sub-plots!

This guy Koenig must be some kind of genius to be able to picture such a vivid picture of the period before he was even born. I’m definitely putting all of his stuff on the top of my to-do list.

Location:
1953, Atlantic City for the most time, shortly in New York

Body count:
7 most likely 8, although 2 are not directly related to the main story

Dames:
next Miss America and black (kind of) hooker

Cover:
good and pretty accurate. Photographer is important character of the story and he does shoot girls in nude. I like her facial expression because she’s a bit frightened and not lustful of flirtatious as she’s supposed to. Illustrated by Max Phillips who is regular artist of Hard Case Crime books and I think this one together maybe with Ed McBain’s The Gutter and the Grave is his best.

Cool lines:
Don’t bother about the suspect, if she’s the dog you say she is. Describe her as being unconventionally beautiful.

Like most mid-size east coast dailies the Press gave little ink to Negroes. Sure, Negro criminals preying on whites made for good copy. But if you played out the disappearance of a Negro girl, you would be expected to cover her friends’ weddings, and the birth of their children, and to make space on the obituary page, too. The readers did not want integration with their morning coffee.

She felt tears welling, but wouldn’t let them come. They were a part of herself she was able to keep him from having.