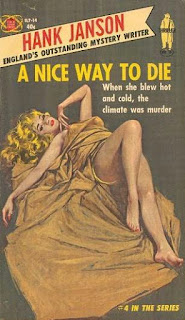 Let me see if I got this one right: an exotic Slavic beauty arrives from Ileria with the sole purpose of wreaking havoc in America by corrupting its youngsters. Going from city to city stirring up ever-susceptible teenagers to make trouble and thus undermine US civic authority. To make things worse, this professional organizer of teenage crime is above the law. She has some (not really well-defined) post with one of the Commie embassies meaning she has been granted a goddam diplomatic immunity!

Ileria? One of the Iron Curtain countries with a rigid dictatorship that makes the Soviet regime seem like paradise by comparison.

You may be forgiven for thinking that this could be an intriguing attempt of the juvenile delinquent drama placed into McCarthy's communist witchhunt era. It's not. It's shit.

Not sure how to categorize it. It surely cannot be a mystery since as early as on page #14 (see 'object of desire' of the facts section below) everything is pretty much explained. It sure as hell isn't a fucking thriller unless you get thrilled by a gang rape? The action genre may possibly pass as our hero is proficient in scientific judo (huh?) and its mysterious art of healing called Karmo. I'm unfamiliar with these myself but this scientific/mysterious stuff must really be something since it also covers the handling of a woman's Adam's apple.

But then again, you wouldn't expect an author to know much about female anatomy when his attitude towards the fair sex is such as this:

"Right now I'd say you're about forty below zero - and as mean as a bitch out of season."

"That's what I like about you," she said waspishly. "You say such nice things. You're so sophisticated, so wordldly-wise, so..."

"Shut up!" I warned her sharply, "or you'll get a back-hander that'll spread your lovely lips all over your face."

She glowered at me, but she was perceptive enough to know I wasn't kidding. I almost never raise a hand in anger against the fair sex - unless it is really merited.

Very disappointing. I had bought a couple of Janson's early books a while ago because of their gorgeous Reginald Heade covers and they both turned out to be okay-ish. But this is just misogynistic thrash.

See the scan on the right side
The bad guy(s):
See the 'dames' section below. But let us not forget the Blooded Zombies gang that even terrorizes the cops:
"Why - are they supposed to be something special?"
"Yeah," he said grimly. "Special - like vicious, mean, crazy. They call themselves the Blooded Zombies; they hell around looking for trouble. The boys tote switch-blade knives, zip-guns and choppers, the girls wear bicycle chains for belts - and don't mind using 'em. You were lucky you weren't cut to ribbons last night, man."
...
"You might be taking on more than you bargained for, Hank. They've got the whole community and half the cops as scared as rabbits."
Dames:
There's Ellie, a teenage beatnik chic, but the communist nymphomaniac Miss Tanya Varsak obviously takes the center stage:
This one was a real tasty dish - a dame who could start a revolution by running the tip of her tongue around her lips and letting a fleeting promise flash briefly in her dark, upslanted eyes.
Location:
L.A.
It opens in Chicago where our hero has just landed on the plane from New York. The whole thing is (once again) a bit silly. You see, Hank has recently exposed some shit on the almighty Organization that now in turn promised him revenge. So he finds some lame excuse to fly to sunny California - he's no longer able to operate in Chicago because everyone would be afraid to be seen in his company.
This whole episode is entirely redundant and has no implications on the following events. Just some padding used to reach the word count.
Body count:
Pretty early on, Hank is tired (!?) and takes a nap:
I yawned and stretched luxuriously and turned over and closed my eyes. That was where I made my big mistake. I should have hopped out of bed and put my ear to the keyhole. If I had done that it is quite possible I might have saved myself a whole mess of trouble - and maybe three lives.
The napping part is okay and I have no issue with it but his body count doesn't match mine. I've counted a few more than just three although some of them don't get confirmed. For example - the car blows up with some kids in it but no definite death count is given later. So let's settle for the final figure of 5.
The object of desire:
My job, according to the Chief, would be to latch on to her and find out the score. He didn't put it quite like that though; what he said was, "Get the bitch in bed, Hank, and find out what makes her tick."
References:
"Take me now, Hank. Don't wait," she insisted, climbing on top of me with all the agility of Willie Shoemaker mounting a Derby winner.
Cool Blurbs:
"When she blew hot and cold, the climate was murder"
Kind of cool even though I admit I haven't got it. Surely the blowing thing doesn't imply what I (and you too) are thinking about. Or does it?
Title:
Once again, I'm a bit confused. Call me peculiar but there must be nicer ways to die than being gang-raped by a bunch of horny Mexican juvenile delinquents in a desert and then to perish "with a sorta PFUUUF! when the gasoline exploded"?
Edition:
Gold Star IL7-14
Cover:
Not credited but according to pulpcovers.com done by Paul Rader. Beautiful. I love the striking combination of gold blonde and red signaling the danger!
Cool lines:
Nothing really to report here. The whole thing is written in a most simplistic pulp style. With some dialogues that embarrass our hero. Here's a sample that should give you an idea:
"You're both wrong," I chipped in. "The right guy only has to look in a girl's eyes and no matter how she blinks or flutters her eyelashes, or looks the other way, he knows - and she knows he knows."
The amber flecks in her eyes flashed dangerously.
"You mean like the way you're looking at me?"
"Uh, huh." I grinned. "Why not?"
"Oh - and you think you know, and I'm supposed to know you know. Is that what you mean?" She asked haughtily.
"Uh-huh!" I grinned again.
Posted by Jure P. at 3:52 PM No comments: