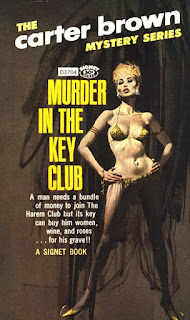 He grinned, showing the white horsey teeth that looked more like piano keys than anything else, and he had about four octaves bunched in his mouth.
Posted by Jure P. at 10:21 PM No comments: 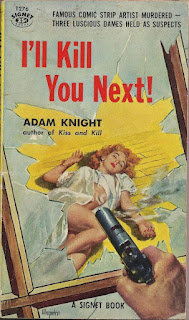 Page 100 and our hero still has no tangible results or clues other than pathetic whining "he wasn't the type" on the investigation of his friend's alleged suicide. But Steve shouldn't be too surprised really because for the better part of the book he's just running around like a headless chicken and gets knocked out every now and then. And to be a bit mean, his lack of progress can easily be attributed to a somehow bizarre approach to interviewing his suspects which is basically, to threaten them with calling the cops in case they don't cooperate. What a sissy...

So now he gets frustrated (along with the reader) and changes his M.O. He's yelling at women, slaps them, pushes them around in order to get some useful information. A bit mean and nasty and of course totally redundant stuff. This is not the type of hard-boiled prose we love and appreciate. What an asshole...

It just doesn't work. Not only the unlikeable protagonist and non-moving plot but also the whole pace is off, It keeps breaking the flow and dialogue with over-descriptive bullshit about everything and nothing (usually about women's anatomy). Flat, without any real edge or tension to it, repetitious and dull dialogue with no snappy badass one-liners.


Dames:
There are several and my favorite was Kate with her refrigerated eyes. But the main one is Vicki who resembles the great American sex machine:

Blackouts:
Well, he's pretty incompetent to be honest so he gets the shit kicked out of him no less than four times. None of them very memorable. If I would have to vote, I'd go for the first one. Thwacking thud?

References:
There's a bunch of references to various cartoonists but most of them seem a bit forced and the whole thing sometimes feels little pretentious and patronizing, But here's a couple with which we are more familiar: 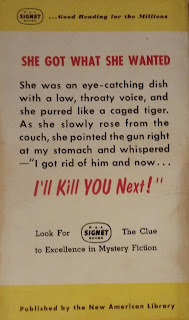 Title:
It's cool sounding (or is it?) but has no real connection to the story. I'm including the scan of the back cover which may give it some meaning... but the whole text is fabricated. None of it is part of the book. Don't we just love these old pulp publishers?

Cover:
Another great one by Robert Maguire, although not as iconic as the one he did for Knight's another Steve Conacher yarn Stone Cold Blonde. It makes you kind of sad that such great artwork was wasted on such mediocre books.

She spoke softly, too low for her usual speech pattern. Her words carried a strong alcoholic quality.
Posted by Jure P. at 12:09 AM No comments: