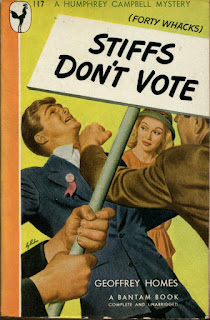 I'm a big fan of Geoffrey Homes and was saving this one for a special occasion. It's election day today so let's celebrate the mysterious ways of the US political machinery with a book about non-voting stiffs!

It blends personal grudges of a small-town community with the local politicians' dirty contest to win over the electorate. So when the crime takes place, our hero has plenty of possibilities to investigate. Was it business or personal? Combination of both? With a touch of a crime of passion thrown into the mix?

Once the case is solved, it does turn out that the story was solid and without plot holes. The solution too is quite complex and far from trivial so hats down to the author. Only by the time it ends, I pretty much lost interest.

It's 180 pages long. Which by itself of course is not a problem. But what is problematic is that after the first killing nothing much happens. There are no new developments to speak of except our hero constantly recruiting his helpers. There's his hard-drinking greedy boss/partner, their recently hired secretary Robbie, a newspaper reporter, and finally some lawyer. All this doesn't really help the pace since now we have five people running around like headless chicken doing fuck all instead of just one.

But the most annoying and distracting thing is Humphrey's crush on Robbie. He starts hitting on her the very first day this poor gal gets hired (#metoo!?) and keeps giving her the assignments that are well above her pay rate just so he can keep her close to him. And toward the end, we need to endure crap as corny as this:

He stood in front of her and his hands gently held her arms. There was so much he wanted to say, so much he could have said if Robbie had been someone else. No glibness now. All his pretty speeches valueless - because he had said them so many times before. And if they were true, they wouldn't sound that way. Repetition had robbed them of the ring of truth.

Ok, I'll give Mr. Homes some benefit of the doubt. You see, Robbie has a crush on Joe who is also the main suspect. So it may be possible that the author intentionally created this love(less) triangle to mislead the reader into believing that Joe is actually guilty so that Robbie will broken-heartedly fall in hands of our hero at the end. Kind of a double twist. But even if that were true, this shit is way too annoying to compensate for such a gimmick.

Well written with more than a decent plot but ultimately disappointing. Geoffrey Homes remains one of my main men so I'll call this one a slip and blame the editor instead of the author. Who knows how it would turn out with Robbie's character dropped (and consequently the book trimmed down for 50 odd pages) and some action sequences added. A few more stiffs wouldn't hurt it either.

Hero:
"Is this Campbell any good?"
"Do you need a detective?"
"Not now," Joe said. "You never know."
"I think he is," Robbie explained. "He doesn't say. His partner does. His partner is a big fat man named Oscar Morgan and I think he drinks a lot. His partner says that the firm of Morgan and Campbell is the best detective agency in the world. He says it is the only honest one in existence."
Dames:
Well, there is of course Robbie: Class and chestnut hair with a red sheen to it and a figure you couldn't hide under a man's overcoat. A patrician. He withdrew the word. Lovely was better. Lovely and clean and sweet. Nice lips, not too full.
But I liked more Mrs. Mary Otis and her bitchy attitude even though "the woman wasn't pretty but she looked kind and her ankles were good"
Her ankles?!!? What kind of a fetish is that? Anyway, after the promising start and memorable appearance in the classic dame-comes-into-the-office scene, she is denoted into the supporting cast and pretty much disappears until the conclusion.
Location:
"Why?" Joe asked. "Why would anyone live in Joaquin?"
"I like it."
"It's flat and it's hot and it's corrupt," Joe said.
"The trees are lovely."
Body count:
1
References:
The book opens with Robbie meeting Joe and providing some missing verses of the song he's singing:
"The preacher he did come, he did come,
Oh, the preacher he did come, he did come.
And he looked so God-damn glum
As he talked of kingdom come..."
"I like that. Don't you like that?"
"I'm religious," Joe said. "It offends me. That's probably why I never learned it. Go on."
"As he talked of kingdom come-
God damn his eyes."
"There you are. Now sing it."
Great stuff. Hard-core! And needless to say, I was immediately off to google it. Didn't take long to identify it as the Sam Hall song and after reading the article on Wikipedia, I'm a bit embarrassed now for not knowing it before. Many variations from different performers are out there and it took me quite a few clicks more to find the one that's pretty close to what Joe is singing. You can (and really should) check out the lyrics here and while you are reading it, I can recommend listening to the Dubliners version.
God damn his eyes. Hell yeah!
Title:
Originally titled "Forty Whacks". Which is a great title and also relates to the story because our sole victim gets chopped up in pieces with an ax (!!!) and every now and then our man Humphrey hums this little chant to himself:
Joseph Border took an ax,
Gave his mother-in-law forty whacks
Why was this re-titled by Bantam? Was there some political campaign going on at the time and they took an opportunity to ride along and get some free publicity? Whatever the reason, they should have at least re-titled it properly as "Stiff doesn't vote" since there's only one murder in this one.
Dedicated to:
To Sally
Edition:
Bantam #117, October 1947
Cover:
Not credited but according to pulpcovers.com, it was done by Hy Rubin.
Nothing too special about it but I love the girl's (amused?) expression and find the idea of placing the title as a political campaign slogan a bit naive but also very charming.
Cool lines:
Nothing really that I would usually consider to be cool. But since today is election day, here is a couple that proves that some things haven't really changed much for 80 years:
Some men were putting a twenty-four sheet on a billboard in the vacant lot across the street from the Cooper Building. It showed a meek little man having his pocket picked by a pig-faced gentleman labeled "Public Utilities." Looking hungrily on was an animated slot machine with his arm around a bawdy wench in a very low-cut dress.
Charles Hyatt had on white lounging pajamas cut Russian style, which would probably have annoyed his constituents who loved to hear him talk about the "Red menace."
Posted by Jure P. at 9:43 PM No comments: