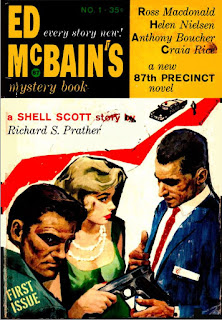 With the abundance of covid-19 time on my hands, I'm (yet again) sorting and categorizing my movies and books. I finally tackled the petabytes of stuff downloaded over the years and have re-discovered a bunch of exciting stuff. When I came across this one, I thought it would make a fitting choice to wrap up the recent cops killing and hatings posts.

Ross Macdonald was also a big reason to select it, and Midnight Blue is - as expected - an excellent Lew Archer story written by the grandmaster with his distinctly elegant style and theme of messed up middle-class families. It keeps sidetracking the reader into obvious conclusions but finishes with a good old crime of passion. Sad and tragic with no winners once after Archer ends his investigation. Not the most original or surprising ending, but I still liked it a lot for its fast-moving pace and more than a decent ratio of pages/corpse.

I'd known Anthony Boucher only by name before reading On A Day Unknown, but this will soon change. Brilliant stuff, although I must admit that my knee-jerk reaction after reading a couple of pages was, "For fuck's sake, not one of those". British (!) true-crime (!!) police procedural (!!!) - "The case was a splendid challenge to a pathologist."

But soon my dismay turned into curiosity, and by the fifth page, I was enjoying this immensely. It's a tender and tragic love story of two lost souls in England during the war years. The Canadian Indian soldier and a local British girl:

"At first," said Sangret, "when I slept with Joan I used to have connexions with her sometimes two or three times a night and later on sometimes not at all." They had reached a state of intense need to be with each other even in the absence of sexual hunger - which may be one definition of love.

And you can imagine what the connextions are, don't you? If not, this will clarify things:

(Throughout, both in his long statement to the police and later on the witness stand, connexions is the normally monosyllabic Sangret's only word for sexual intercourse. One imagines that it was suggested by a police stenographer.)

There's not a single line of dialogue! The whole thing is written as court transcripts compiled from various testimonies that are complemented with the narrator's witty comments and observations (he was, however, totally and literally illiterate). Very original and very funny but also sad and poignant

The next one is Fletcher Flora. I liked his story As I Lie Dead from the Masters of Noir #1 but have since read a couple of his other things and wasn't much impressed. And after It was All the Girl had to Live For Now - Somebody Else's Death, I'm even less impressed. Apart from its cool title, this is totally forgettable. Probably something Mr Fletcher put together quickly to cover his rent:

A hitman (of sorts) shoots a politician during the rally because the guy had ruined his girlfriend's father. It then finishes with some wisdom about the revenge not solving anything, and "he understood with silent and assured despair that he had killed two people from the window upstairs".

Richard S. Prather's Film Strip was no disappointment because I knew what to expect. I just cannot get into his Shell Scott. His brand of cosy crime mixed with hard-boiled style doesn't work for me, and I find its juvenile humour silly and sometimes idiotic and offensive. A teenager could call his girlfriend "my dear little imbecile", and maybe some of his friends would find it funny and laugh at it. But coming from a grown-up with white hair?

It begins with the "little imbecile" performing a private striptease for Shell on the beach while there's a murder in progress on a nearby cliff. It will also end the same way because the ridiculous plan to trap the murderer will go wrong. Shell is cornered by the killer in an empty movie theatre, and our exhibitionist cannot think of a better way to distract him so that Shell can take him over. Enough said...

Helen Nielsen's Confession plunges the reader into the midst of an angry mob about to lynch a couple of kids accused of hit and run. They break down under pressure, and the boy signs the confession. During this riot, we get the complete picture of what had happened in flashbacks. Well written, tight, and tense. Works well on both narrative and emotional levels. But the happy ending and simplistic morality message spoiled it for me a bit. I think the girl's "betrayal" would be more effective (shocking?) if the couple were older people and not some teenage kids eloping to Vegas to get married.

Hard Sell from Craig Rice is great. Fuck Shell Scott, this is the kind of humour that I like:

He found himself looking at a large man with iron-gray hair, blue eyes, and a prominent chin. The man looked so healthy that Malone wanted to turn away again.

Or, if you're not convinced, this (note that von Flanagan is a cop!):

Malone agreed. "You don't seem to be taking much of an interest in this one. Something wrong?"
"Plenty," von Flanagan said. "For one thing, it's an impossible one to solve. For another, I don't want to solve it"
"Why not?"
Von Flanagan shook his head wearily. "Malone" he said, "have you ever had a run-in with a magazine salesman? Have you ever had one of those little monsters stick his foot in your door and tell you how much you needed his rotten magazines? Have you, Malone?"
Malone nodded.
"They should kill every last one of them," von Flanagan said. "I mean it, Malone. Anybody kills a magazine salesman he deserves a medal."

Great stuff. Outrageous! One cannot but like the main protagonist Malone "the little lawyer" and admire his efficiency as he solves this one by mainly drinking at the bar and making some phone calls along the way.

With two double ryes under his belt and a pair of beer chasers keeping them company, Malone felt in condition to use the phone.

Admittedly, the "suicide" solution is a bit bonkers, and I'm not sure I really got it, but I don't care. Like Mr Boucher, Mr Rice is another one on my radar now.

Moving on. Before the main feature, there's a cool intermezzo. A "special report" on the history of forgery and counterfeit titled Reasonable Fascimile, written by Rex Lardner. Educational, I guess, but foremost funny. Quite a tongue in cheek stuff like this:

The earliest counterfeiters, who clipped coins and made new ones from the shavings, had their ears
clipped when caught. King Canute decreed that their hands should be cut off. The Romans deprived counterfeiters of their citizenship and then removed their ears and noses. Later, these steps not considered sufficiently discouraging, their ears, noses, hands, and feet were cut off and what was left was served to hungry lions. One presumes they were hungry.

It finishes on the resigned note that there's a bunch of counterfeited merchandise being sold these days, but not much can be done to prevent this. It kind of makes you long for the days of good old King Canute.

McBain's 87th precinct novelette The Empty Hours is the main part of this digest, and, I guess, it was its main selling point. But I won't spend much time on it because I don't want to repeat myself when it comes to this serial. It is a bit paradoxical that the police procedural methods actually hinder the story and make it less plausible in this one.

For example, as we are approaching the end, cops are still (a week or so after the crime) for some reason interrogating the victims' neighbours and informers even though they have plenty of hard evidence and other leads to pursue. And btw, there's a description of a line-up that is more or less copy/paste-ed from the Cop Hater. And similar to that one, here too, they find the solution by fluke.

The last story is Richard Matheson's chilling The Faces. A little psychological gem about the abuse and mental illness that (I believe) says that some people simply shouldn't have kids.

An excellent choice to finish this interesting collection with a flavour of horror.

From Midnight Blue:
She had on a plain white blouse, which was full of her.

From the Empty Hours:
She moved with an expert femininity, a calculated unconscious fluidity of flesh that suggested availability and yet was totally respectable. She seemed to have devoted a lifetime to learning the ways and wiles of the female and now practiced them with facility and charm.

References:
"On A Day Unknown" retells the story of Georg Büchner's Woyzcek (so now we also know from where the Boucher pseudonym is coming from). But even though I've seen Herzog's film, I must admit I didn't make the connection until once this play is explicitly mentioned at the end.

Cover:
Pretty cool. It could be portraiting a scene from either The Empty Hours or Film Strip. But since none of the tough guys has white hair, I would lean more to the former.

She touched her thin breast absently, pathetically, as if perhaps she hadn't been much needed in the past.
Posted by Jure P. at 7:09 PM