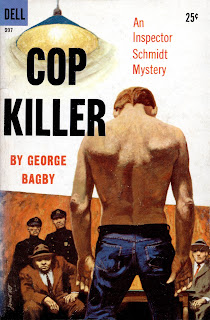 I barely fell over the line with this one. Endless pages of convoluted sentences that can (and often do) switch context several times before they are finished. Written in some weird, archaic language in which bodies are cadavers, and there are not many nouns without accompanying adjectives like germinating, subcutaneous, lugubrious... Amusing at first, soon annoying but then simply distracting. I lost interest and stopped looking up this crap in the dictionary halfway through.

The plot is decent, although a bit simplistic and could (should?) probably fit just as well into a short story or novelette. But still, every story point is re-established several times, and sometimes even the most trivial facts are described with almost obsessive attention to detail. To make this (even) worse, the duo of our investigative protagonists keeps mulling over these facts repeatedly, thinking aloud about them and discussing the theories and possibilities. The word "would" is probably used several times on every page.

No action, no story development. There are times when this becomes apparent even to our hero. But his typical response would be something like this:


Schmitty shook his head. "Just keeping more angles open," he said, "until they close up on me. We need contusions or abrasions."

The most shocking aspect of this one for me was to realize that it was the 26th entry of the series that would go on and run for another 27 books. So you collectors out there, if you're missing this one from his middle period, you may be interested to know that my copy is now available on eBay. Give me a shout, and I'll be happy to give you a discount. You deserve all the breaks you can get if you plan to go through with this one.

Hero:
It uses the gimmick in which narration is in the first person, and the author is supposed to be the narrator (he's not, his name is Aaron Marc Stein). Which is generally fine but, in this case, doesn't make sense. Dr Watson tagged along with Holmes, but you can't do that with the police inspector. Not unless you're in some sort of an official position to be able to do so. An assistant? Maybe his partner? At least his best buddy news reporter or private detective? We just don't know. All we learn is that he is "his ink-stained shadow, Bagby".

So de facto hero in this one would be Inspect Schmidt, aka Schmitty. Bagby seems to be fanatically devoted to him with a passion bordering on something more than just a professional admiration. I simply couldn't share such sentiment. The only thing that makes this guy special (eccentric?) is taking off the shoes whenever he gets a chance!? But more importantly, he's a bit of an asshole as he does fuck all about the savage beating some kid gets from his uncle or about the smacking that Miss Smith gets from Papa Black.

The bad guy(s):
The main suspect for the cop killing is a fifteen-year-old kid to whom more than a hundred pages are dedicated. Maybe justifiably since he is a true badass who started his criminal career four years ago with "rushing the theatre door" at the movies.


Dames:
Miss Smith is the only female character (!), and she appears twice (!!) on a grand sum total of three pages. But she's cool; I liked her a lot. And btw, she delivers the only cool line in the whole book. See below.

It's actually authentic in depicting the scene in which the kid is interrogated by the cops. They make him take off his shirt so they can examine the bruises his asshole uncle left him after giving him the "licking he wouldn't forget". Thankfully, these bruises are left out of the illustration.

Cool lines:
"Cigarette me, somebody," Miss Smith growled. "I'm half dead for a smoke.[The Coolest!]