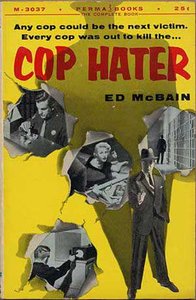 I have read a few McBain's books in the last couple of years and was saving this one for a special occasion. After all, it is the very first of the 87th precinct series that would go on and run for incredible half a century which - I guess - would make Cop Hater the mother of modern police procedurals. So after reading Never Kill a Cop, I decided to stick with the cop-killing theme and finally picked up this one.

Despite its overly poetic tone (...dazzling galaxy of brilliant suns...) I was hooked after 30 or so pages. Written exceptionally well in the flat, matter-of-fact narrative that manages to elegantly mix the intimate family parts with very gritty and realistic stuff about the police investigation mechanics. To take the latter to an extreme, several official forms are pasted into the text (see the "Bad Guy" section of the facts below).

After some initial dismay, I wasn't too bothered by them and actually found them amusing and took time to read them instead of simply glancing over them. And I'm proud to report that I discovered an error in one: on the autopsy report, there's not explicitly stated that the measured height is actually the height of a skull. Hence, it reads like the victim was 28.9 centimetres tall (or short). Check it out yourself:

The best part of these technicalities comes early when the team needs to create a cast of the shoe heel left imprinted in dog shit (!!). If you'll ever find yourself in such a predicament, here's a formula that you need to use.

So, yeah - it's cool, and we have a bit of everything here. Ballistics, various reports, autopsies, interviews, the line-up, and stool pigeons. Or, I should say, THE stool pigeon:

Danny Gimp is by far the best character in this one. The entire dialogue of the cops purchasing information from him (needless to say, taking place in a dingy bar, a.k.a. his office) is written in slang and is such a joy to read. It's about three pages long, so I have no intention of typing it here in its entirety. But it deserves at least its conclusion:

"I don't trust junkies," Bush said.
"Neither do I," Danny answered. "But this guy ain't a killer, take it from me. He don't even know how to kill time."[The Coolest!]

But I'm going too fast. Unfortunately, before I reached that part, I kind of lost interest. It simply gets bogged down too much. While I can understand the involvement of "the cynical newshawk" reporter Savage (to be honest, he actually contributes to the story development), I found that whole segment about juvenile delinquents gang needles and pretty silly. It just took away the momentum so the book simply became merely interesting and stopped being thrilling.

What finally spoiled it for me, was the ending that felt like something hastily patched together with the "twist" that you could see way ahead. I bet that all the police procedural fans out there felt cheated as hell with such a climax in which police work doesn't really mean shit, and the case break-through is so far fetched. Furthermore, it felt like the author himself lost interest because (for example), towards the end, he still found time to fill two whole pages with Steve and his fiance being in a Chinese restaurant deciding on dishes they were about to order and decrypting fortune cookies...


Undeniably, this is good stuff, but it's just not my cup of tea. For me, it's one of those where the total sum of its parts amounts to much less than it should. It feels like the author put all his effort into research and his skills into creating the atmosphere but neglected the story itself. Especially the ending sucks.

Hero:
An ensemble cast, but Steve Carella is our main guy:

He was a big man, but not a heavy one. He gave an impression of great power, but the power was not a meaty one. It was, instead, a fine-honed muscular power.

Worth mentioning that he is partnered with Hank Bush in this one and not yet with Bert Kling. But - spoiler ahead! - he will need a new partner once the case of the cop hater is finished. 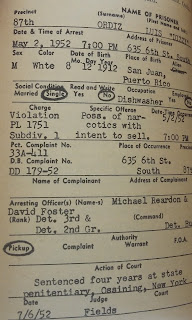 The bad guy(s):
Check out Dizzy's record on your left. Do you think he could be our titular cop hater?


Dames:
There's Steve's fiance Terry and several soon-to-be cop widows like Alice (dynamic blonde with a magnificent figure) and May (full-breasted woman in her thirties...with good legs, very white, and a good body... who could get drunk sniffing the vermouth cork before it was passed over a martini)

And let's not forget about the prostitute La Flamenca:

"And La Flamenca?"
"She's with him, probably cleaned out his wallet by this time. She's a big red-headed job with two gold teeth in the front of her mouth, damn near blind you with them teeth of hers. She's got mean hips, a big job, real big. Don't get rough with her, less she swallow you up in one gobble."

Nice! This girl should have been a part of John Waters' Dreamlanders misfits. What a great pair she would have made with Edith Massey.

Location:
The city in these pages is imaginary.
The people, the places are all fictitious.
Only the police routine is based on established investigatory technique.

There's also one unrelated death in an episode in which a housewife snaps and kills her asshole husband with a hatchet! This sad (and funny?) story is definitely one of the novel's high points and a great example of McBain's brilliant writing.

References:
There's a reference to Joyce's Ulysses, but its inclusion seemed forced. Never read it but would still somehow agree with "Christ, that had been one hell of a book to get through."


Plus, when some suspect gets interrogated, he establishes his alibi by watching the following movies in the local cinema: The Creature from the Black Lagoon, Body and Soul, Seven Brides for Seven Brothers, Violent Saturday.

And what an incredible coincidence this was because I saw Body and Soul just the night before reading this! And a terrific movie it is. Hazel Brooks is great, even though her role is pretty minor.

Somebody is killing cops, so police assume they are dealing with the cop hater.

Dedicated to:
This is for Dodie and Ray

Cover:
Instead of the usual illustration, this one is a collage of photographs by Daniel Rubin. And it makes sense since they were going for realism so hard.

Cool lines:
"We didn't mean to disturb your beauty sleep," Bush said nastily.
The girl raised one eyebrow. Then why did you" She blew out a cloud of smoke, the way she had seen movie sirens do.

"Do I detect sarcasm in your voice, Lieutenant?" Savage asked.
"Sarcasm is a weapon of the intellectual, Savage. Everybody, especially your newspaper, knows that cops are just stupid, plodding beasts of burden."