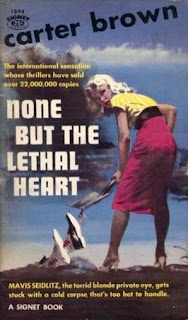 Mavis Seidlitz is just not a heroine appropriate for celebrating strong and independent women. She's supposed to be an equal partner in the Rio Investigations detective agency, but this "partnership" is a bit odd. You see, It is entirely normal for her partner Johnny Rio to throw an appointment book at her for being late, orders her around to bring him drinks (needless to say without "please" and/or "thank you"), and - worse of all - solves the case for her because she is too incompetent and dumb enough to drown in the rain.

I wanted to like this and had hoped that Mr Brown would have toned down his male chauvinistic crap at least when his hero is a female. But instead of satirizing the stereotypes, he uses them for his leading character (non) development. Too bad. Can't really say I was shocked, more like disappointed.

Other than that, the novel is surprisingly O.K. It does take several chapters to get into its goofy sense of humour but then it is genuinely funny. Especially the first half in which Mavis and Rafael run around like Katherine Hepburn and Cary Grant trying to dispose of the corpse with every attempt more silly than the previous one.

This gag becomes a bit too repetitive and eventually wears off. But still, there are other things to enjoy. The supporting cast is pretty colourful, and I liked the dictator's spoiled son Arturo a.k.a. "The Fabulous" and beatnik Terry with his incomprehensible ramblings. Dig this jive:

"It was a kick", he said simply. "What else is there, doll? Don't you want me to have any fun? You a square or something - don't you dig this jazz?"
So yeah, more or less a standard Carter Brown quick read. It is a product of its time that publishers these days wouldn't give a second thought. I have two more Mavis Seidlitz books, but I don't think I'll bother chasing the others in the series. And for the next 8th of March, I'd instead do a post with Dark Angel or Baroness. Until then, happy International Women's Day to all you ladies out there. You rule the world!

Title:
Have no idea what the expression "None but the Lethal Heart" means. I googled it and got back a bunch of links to heart-related diseases.
Edition:
Signet #1694, First printing, August 1959
Cover:
Outrageously funny and definitely in my top 10. She didn't even bother to take off the high heel shoes!?! Plus, check out the defiant look she's giving us - I don't think this gal has any guilty conscience, and I'd bet she'll sleep like a baby tonight!
And it's actually pretty accurate as our heroine indeed does dig a hole:
I had a shallow hole ready in no time, being a healthy girl.
There's a tiny signature in the bottom right corner that looks like Barye. So probably by Barye Phillips?
Cool lines:
It takes some time (and effort) to get into "Carter Brown humour" mode. Stuff like this I do understand and find funny:
He believes the shortest distance between two points is a bullet.
Stuff like this I get, and I find amusing:
I flung open the front door and stepped out onto the porch, and that was as far as I got. A small blue sea broke over me, carrying me back into the entrance hall again. Then the sea sorted itself out into four beefy, uniformed cops, and a gray-suited character with a face that would have made him top man on the totem pole on any reservation.
"O.K.!" The gray-suited guy snarled at me. "Where's the body?"
I took a deep breath and looked down - the scarlet shirt was stretched as tight as it could be. "If you can't see the body, you need glasses," I said coldly.
And then there are the weird ones like this:
This radio gadget is a cute deal - when it gets around to eight o'clock, it switches on the radio all by itself. Then five minutes later it squawks like a Democrat who's just been goosed by an elephant.
Democrat goosed by an elephant?
Posted by Jure P. at 10:49 PM