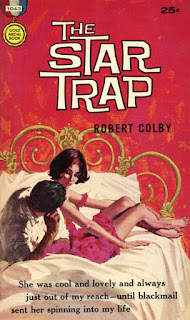 This one truly is a quick read. Not just because of the fairly large font and decent line spacing; it simply races through at the neck-breaking speed. Here's an example: there is a highway chase scene in which our hero is pursued by cops at 96 mph (=154 km/h!). The real deal. With the red lights and blaring sirens behind him. Glenn is an actor, not the badass Ryan O'Neil-like driver - so how the hell does he manage to escape?

Well, it won't take him longer than a short paragraph:

I searched frantically for some brilliant manoeuvre and there wasn't any. Then I swayed past a truck and into the first decent curve. The red eye closed from view. I had a few seconds' grace and when I saw the motel with the vacancy sign, I prayed hard and braked harder. I nearly turned over but it was a big driveway and I slid into it with the rear-end skidding, cut my lights and faded around the back of the building into a parking space as I heard them go by.

So next time you get chased by the cops, remember to pray hard!

A bit hectic, but not bad at all. It starts as a classic mystery of murder & blackmail in which the hero gets used and framed by the femme-fatale (he, of course, knows that he's being fucked) but then gradually changes into a terrific thriller. Nothing really inventive or original, but it does have a little twist at the end that I liked. Besides, it was also lovely to read a Hollywood story in which the protagonists are not super-rich and famous. Instead, they are B-movie actresses turned starlets and shady Las Vegas gangsters turned "producers". Good stuff, gritty and hard-boiled.

This is my first Robert Colby, and it has left me quite impressed. I googled the guy, and it turned out he was pretty prolific. His most praised novel seems to be "The Captain Must Die" and - this simply has to be destiny! - I found it on eBay with the starting bid of $0.99 with no bidders yet. It ends in ten hours, so Mr Colby may appear on this blog again soon.

Hero:
She couldn't handle the body alone. So she called the prize goat of them all - lover boy Glenn Harley.
The bad guy(s):
B-movie actor Norman Rainey who "was the worst kind of cruel, sneaky animal" and his sleazy boss, the blackmailing mastermind Marvin Grinstead who "squeezes people. Little people and big people. He's like an evil god".
Dames:
The rapid pace of narration slows down for a couple of gears when it comes to the ladies. Every noun gets several superlative adjectives and descriptions of our beauties are longer than the high-speed highway chase. There are two. First the good (?) Nancy:
Her face was heart-shaped, intense and utterly delicate. Her eyes were wide, deep brown and calmly, innocently provocative. Her mouth was a masterpiece of soft demand.
She was so slim, so narrow of waist and hip that her body was a showcase for the high curves.
She seemed built for all things tender and sensual, while her eyes and manner intriguingly denied the knowledge of love.
And not so good Mary Ann:
She was tall. Her hair was the colour of dark walnut polished with a wood-lover's hand. It fell sinuous and causal down one side of a face composed in lines of languid grace. A young face, wise but without hardness. In the misty lavender of the eyes and around the lazy spread of mouth, there was a look of beckoning towards some dream of which she had a sly and special knowledge.
Beneath a turquoise hostess gown, it was clear that she had the figure for marvellous dreams.
I was probably intriguingly denied the knowledge of Nancy's love because I found Mary Ann way cooler. She drinks her bourbon straight and is stoned all the time:
I don't tick, I soar. And I do have the habit bad. I'm incurable. I have no shame about it. I have no shame about anything I do of my own free will.
It needs to be said that even with a couple of such knockout babes, the sex angle is ridiculously underplayed. We get an indication of this pretty soon when Glenn is "ashamed of his instant reaction" after simply being close to Nancy. One would imagine that not getting a hard-on would be something to be embarrassed about?
Soon after this "incident", it gets a bit kinky. How else would you explain that they actually do get laid immediately after burying the corpse in the back garden?
His intercourse with Mary Ann is not kinky. It's just weird. One moment they are necking in some bar, but in the next one, we find them in the car having this cryptic conversation:
"Sorry I can't explain now, Mary Ann. But thanks for the lift. And... everything else."
"And after all the... everything else, pet, you still don't trust me?"
"Everything else"? Huh?
Location:
L.A.
Body count:
1
Blackouts:
It opens with our hero nursing a hangover, but this doesn't really count.
Cool Blurbs:
Wild, hot and simple
And I couldn't agree more!
Title:
Cool sounding but pretty inaccurate. I cannot remember any star traps being set. But then again, maybe I've missed it in the rapid development.
Edition:
Gold Medal #538, U.K. Edition, 1962
Cover:
I was a bit surprised to see pulpcovers.com crediting the illustration to McGinnis. Doesn't really look like the master's typical style, does it? If nothing else, her legs are not long enough... But hey, it's not bad at all. Could probably benefit from a gun and/or stack of money on the bed.
Cool lines:
I needed time to hate. And time to think. And there wasn't time for either.
Posted by Jure P. at 11:12 PM