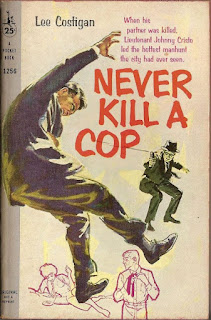 The last couple of posts were too long, and I blame this on my regained enthusiasm after neglecting this blog for three years. I'll try to keep this one shorter, but it's a shame because it would deserve a more thorough review.


Terrific police procedural with its main storyline intertwining with another one told from the perpetrator's point of view. So not much of a mystery, but there's plenty of action, intrigues, romance, and even humour to make it a real page-turner. Great pace too as the whole thing is finished over three days. And btw, chapters are titled by days and timespans within them which is something I always like to see.

It all ties well together, and technical details - more often than not overplayed in the police procedurals - are balanced nicely in just the proper dosages. We have technological wonders of the IBM computer (along with stacks of punching cards, of course), polygraph test, ballistic lab stuff, and basically loads of hard work and determination that pays off. The investigation doesn't simply follow from point A to point B, but instead, there are many bum leads and realistic obstacles like the little episode in which a cop runs out of gas when driving to pick up some major witness! Did I mention there was some humour in this one? And see the "Bad guy" section of the facts below for more.

I do have a few minor complaints. Negro/nigger words are used too often. However, it needs to be said that such language is utilized strictly as a characterization tool (nicer guys would say blackfella) and for making the novel more realistic. I hope. I certainly didn't get an impression there was anything racist about it.

It wouldn't suffer much from 20-odd page trimming and a slight ending rewrite. I don't think that the asshole pimp Lucas should break that easily. But at that point, we are over page 200, so probably Mr Costigan just wanted to wrap it up. Like I'm doing now.

Hero:
Detective Lieutenant Johnny Cristo is the guy we follow around mainly, but in some ways, the hero in this one would be the entire police precinct. I especially liked Eleanor, "the diminutive little lady", who runs the IBM mainframe.

The bad guy(s):
Syndicate running Old Man is the top dog, and the main villains are the ex-pimp Frank Lucas - "a graduate of Sing Sing, an alumnus of San Quentin" and his henchman Marthusian.

But the real star is Fenton, the hitman. We get some idea of him upon his first appearance:

There was no stamp of the Syndicate upon him. There was something odd, though, something strangely fanatic in his face.
It was his eyes. They were dark, luminous, and they seemed never to blink. Frank Lucas had once seen a movie in which John Brown had stormed the arsenal at Harpers Ferry.
Fenton reminded him of John Brown.

I wouldn't go as far as to say that he steals the entire show, but he's definitely a cherry on the cake. Some piece of work this guy is. The polar opposite of the usual professional hitman. Not very bright since he kills a cop at the airport toilet right upon his arrival and later  - even worse - kills a wrong guy. And why you may ask? Well, he simply picks his target's address from the phonebook, and there happened to be a couple of guys with the same name. So forget the usual stuff about the hit preparation, like the long surveillance and gathering info about the target's habits. All that Fenton requires is the name, the address and a piece of advice from the newspaper's horoscope (!!):

Today is a propitious one for action which you may have been holding off for days or even months. Act today to buttress your position at work, in financial dealings or in matters of love.

Not exactly a psychopath. To one of his victims, he looks like "a Midwest farmer dressed for a church breakfast".

It's hilarious to read about the troubles he's putting his employees through. Even though he's told numerous times to back off until things cool down after the cop-killing fuck-up, he doesn't even consider giving up. When Lucas suggests hiding him in one of his establishments (since he's a pimp, you can imagine what they would be), Fenton flatly rejects such an idea because he's a religious man and won't stay in "them" houses. And he's no drinking man either, which drives Marthusian crazy later when he chaperones him.


Dames:
There's Johnny's love interest Terry. She's cool, and this time I wasn't bothered too much with the "I love You" crap after their one-night stand.

And we have seductress stewardess Sally with "curves that seemed to move with a life of their own" and "stacked like a cross between Marilyn Monroe and Jayne Mansfield". But she's around only briefly for an interview and to give our Johnny boy some ideas...

Finally, there's Mrs Lucas. She is mentioned for the first time when her husband is introduced:

He had a pretty wife, younger than himself, intelligent and elastic enough to hide her past.

And finally, for the only time when she briefly makes an appearance, she's described as a "stylish woman of statuesque proportions".

But unfortunately, that's it. Intriguing (elastic!?) with great potential but not used at all. It would be cool to find a prequel to this book centred around her and Fenton.

Location:
I can't remember it explicitly named, so it would be one of those 87th precincts "the city in these pages is imaginary".


Body count:
3 (+ 1 Fentom's victim that is not directly related) 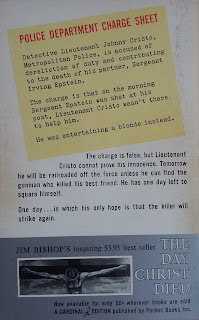 The object of desire:
Finding a cop killer

Cool Blurbs:
There are no notable blurbs, but I include the back cover scan anyway because I find it funny to see an ad about a book related to Jesus Christ on the back of a pulp paperback. Bad sales?

Title:
Another pretty self-explanatory one.

Dedicated to:
"To Ann"

Cover:
Nice one. No credits, but according to pulpcovers.com, done by Darrel Greene.

Cool lines:
There's a nice and somehow tender subplot concerning one cop whose wife is getting sick and tired of him never being around and is about to leave him. So, it was nice to read this in the epilogue:

Motorcycle Patrolman Ryndes had solved his domestic problem by kidnapping his son, leaving him at his mother-in-law's, pouring three martinis into his wife and attacking her in bed.

That's an original and cool way to wrap up the book with a happy ending!
Posted by Jure P. at 3:15 PM