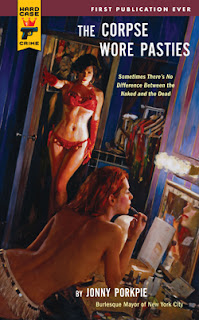 Truly horrible, I strongly suggest you keep away from it!

Again we are in NYC in the sleazy surrounding (this time it’s burlesque) and basically what happens is close to this: there’s a show where one of performers gets killed on the stage and our hero is present among few other strippers (dancing girls). For the reasons not clear (at least not to me) he becomes main suspect, so for the rest of the book he wonders around (because his time is running out…) trying to prove his innocence by playing amateur detective who more or less just interviews remaining five girls in somewhat bizarre/amusing (we’ll come to that again shortly) circumstances. In all this time only three more characters are introduced: producer of the show who is another burlesque artist, our hero’s wife (yes, another one) and some “creep in the overcoat”.

So we face Agatha Christie kind of shitty set-up of some exotic environment where murder strikes unexpectedly and there’s closed circle of suspects, each of them of course having bulletproof alibi. I swear to god that in the middle of this crap I actually thought about “Murder on the Orient Express”. Because, you see, our victim wasn’t popular with any of the other protagonists because she stole their burlesque acts. Which is apparently such a big deal in the dirty, sinister and morally corrupted underworld of NYC burlesque that one can easily get killed for?

Idea about twisting classical crime genre and its main protagonist into some unusual (sub)cultural environment is certainly not new one and probably some skilful writer could even get away somehow with such a poor story and lack of plot/mystery/suspense/whatever. What makes this novel painful to read is its “humorous” tone. Author is constantly trying to be clever and witty, but jokes are really pathetic. I don’t know, I guess some 15 years adolescent will find them funny, I certainly felt sometimes like putting off cigarettes in my palm. And it gets from bad to worse when Jonny Porkpie feels a need to apologize for his bad jokes, like:

And this relentless shit just doesn’t stop. It goes on and on and on and becomes truly unbearable when he even starts to explain these “jokes” in case we are too stupid to get them. I think the only one I actually liked was when he called investigating police officers Brooklyn and Bronx. But this is ruined immediately in the next paragraph when we learn that “Those weren’t the officer’s name, by the way. Those were their accents.” No shit, really?!!?

Enough of this ranting, it was more than this book deserves anyway and it only made me pissed off again. I try to find something different, interesting, amusing, basically anything good in any book I read, but really nothing at all is here. Sorry Jonny Porkpie, but I don’t think we’ll ever meet again.

Hero:
Jonny Porkpie, “the Burlesque Mayor of New York City”. Cops sometimes refer to him as “Senator of Striptease”

Cool lines:
none as far as I’m concerned, but I’m pretty sure Mr. Porkpie thinks every single sentence is divine.
Posted by Jure P. at 8:33 PM