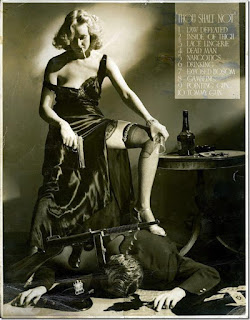 "I've never yet had trouble handling a man, whatever his age"
Beth in The Lady Kills (Bruno Fischer, 1951)

She said quietly: "This throws high and to the right. Francois, if you take another step towards me, I'll aim for the middle of your left thigh. I'm a good enough shot to put a very painful cloud over your technical qualifications to manhood."
Grace in The Caper of the Golden Bulls (William P. McGivern, 1966)


"I'll kill you!" she announced passionately. "I'll beat your brains out and feed them to the ducks on Central Park Lane!"
Nina in The Sometime Wife (Carter Brown, 1965)

I'd thought she looked awkward and top-heavy, and, hell, I could see now that she didn't at all. Her breasts weren't too big. Jesus, her breasts!
She looked cute-mad and funny-sweet. She looked liked she'd started somewhere and been mussed up along the way.
She was a honey. She was sugar and pie. She was a bitch.Carol in Nothing More Than Murder (Jim Thompson, 1949) 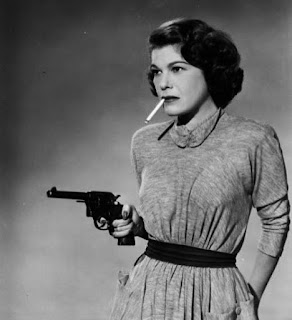 "She was a swell girl but she lied like hell."
Janet in The French Key Mystery (Frank Gruber, 1940)

"One fucked-up dangerous damn piece of ass."Jenny in The Wrong Quarry (Max Allan Collins, 2014)
Martha was sex. Sex wrapped up in cellophane. In a glass case. Never, never touch.
Martha in Never Kill A Cop! (Hal Braham as Mel Colton, 1953)
Man, what a bod: At twenty, she looked like a model in an ad for those cereals that taste great but also make you shit right.
Jennifer in Night Train (Martin Amis, 1997)

Feral look. Gypsy look. A mature woman so alive she made the others in the room look two dimensional.
Cinderella in A Bullet for Cinderella (John D. MacDonald, 1955)


"Maybe you admitted too fast that it was money, Tal. I am noted for my fondness for money. It pleases me. I like the feel of it and the smell of it and the look of it. I'm nuts about it. I like all I can get, maybe because I spent so much time without any of it. A psychiatrist friend told me it was my basic drive. I can't ever have too much."
Cinderella in A Bullet for Cinderella (John D. MacDonald, 1955)

She had a Maserati gearbox built into her pelvis, five forward gears, two reverse.
Amy Taylor-Davis in Shaft Among the Jews (Ernest Tidyman, 1972)

She seldom saw her husband, of course, and he demonstrated his gratitude for that deliverance with continuing, unquestioning financial support and a recognition of the fact that she was utterly worthless as a human apart from her efforts at keeping the economy strong as a continuous circulator of currency.
Cherry Culp in Shaft Among the Jews (Ernest Tidyman, 1972)

"Petite but curvy, the kind of cheerleader they reserve for the top of the pyramid."
Mustang Sally in The Wrong Quarry (Max Allan Collins, 2014)

Prosecuting attorneys referred to her as the iron cunt.

She came, the murderess, in pink satin and foamy lace, like an angel of destruction, stroking her loosened hair with a silver-backed brush.
Vera in Four Novellas of Fear (Cornell Woolrich, 1936 - 1940, republished in 2010)
As he crouched on the floor, his forehead was on a level with her automatic. He started to bring up the tommy gun. She shot him between the eyes.
Target: Mike Shayne (Brett Halliday, 1959)
I hesitated before answering. “Ten G’s is a lot of money, baby.”
“I’m a lot of woman,” she answered.
Masters of Noir - Volume 1 (1953-1959, published in 2010)
I growled, “Don’t flatter yourself.”
“Shouldn’t I?” She got off the chaise longue and ran her hands sensuously over her half-naked body. “Look at me, Gus. Don’t you think I have a right to flatter myself?
Masters of Noir - Volume 1 (1953-1959, published in 2010)