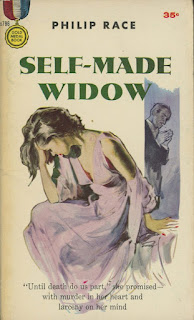 I came across this one while reading an excellent article on convicts-turned-writers in the recent issue of Justin Marriott's one and only Paperback Fanatic. Like always, I discovered lots of exciting stuff and several new books were added to my ever-growing to-do list. Just couldn't pass this one because of its incredibly cool title. Luckily, I could find a nice copy for just a few bucks.

We learn in the article that Elmer Merle Parsons aka Philip Race was a small-time crook, in and out of San Quentin for minor crimes like burglary, car theft, and passing stolen cheques. I know I'm going to sound a bit mean, but his lack of a more severe crime experience is painfully evident in this one. Our hero needs cash badly (expensive wife...), so he ensures himself and - a couple of days later! -  stages his death. The greedy couple's plan is to simply find a bum whose burned corpse will pass as his. Obviously, all they need to do is to swap clothes. To make the identity switch waterproof, Johnny puts his wristwatch on the unfortunate victim. This truly pushes the limits of amateurish crime to new levels.

None of the above is much of a spoiler since it gets explained on the back cover and the first-page teaser.  All this stuff is over by page 70, but we still have 120 more. Turned out these were 120 excruciating pages to go through. Johnny ends up on the skid row, meets his new best friend, falls in love with a hooker with a golden heart, starts playing the piano again,... and finally, fucking finally, gets his revenge.

Dull, predictable, going nowhere fast, with the hero as confused and uncharismatic as Liam Neeson. Skip it.

One last thing! If you have a drinking problem, I strongly advise you against picking this one up as not to get into temptation. They all drink, and they drink constantly and heavily. I'll remember the Self-made Widow for the (funny?) scene in which our hero instructs the cab driver to have a couple of drinks while waiting for him!?!

Hero:
Johnny Babcock, not a very successful oil salesman.
Dames:
Titular Edna (fire in velvet and fever in silk) is by far the best thing in the book. The way we like our femme fatales - hard, smart, and sexy. Her antithesis is Dee, an ex-hooker (but still with a golden heart) who reminds Johnny of her undying, everlasting love on every single fucking page she appears on.
There's also some silly, amateurish psychological sex angle. There's lots of passion between him and Edna (see below), but with Dee, he cannot get it up at first: "We were discovering each other, a process any young couple knows about." Once they do get it going, the author doesn't detail the act itself (simply, "This was the time"), but he does not spare us from enduring their family planning debate immediately after they finish. If you're curious - there will be four boys and one girl.
Location:
Los Angeles
Body count:
3
The first one is great! After they finish the dirty business, our greedy couple needs some fuel:
I got the bottle. My fingers couldn't handle the cork. I smashed the neck against the door, poured my mouth full of the hot fluid.
"Me, too," Edna said and I handed it to her.
Once invigorated, they have wild sex:
You couldn't call it love. It was too furious, too jerky and savage. A fight, it was, and both of us emerged shaken and exhausted, cramped and weary from twisting in the confined front seat
The object of desire:
A hundred thousand dollars! All the money in the world. No more short end of the stick, no worrying about whether some idiot likes you enough to give you a five-dollar raise. People and places, sweetheart. Clothes, excitement...
Blackouts:
3
References:
The air in the joint was hazy, full of drifting tendrils of smoke; the same music insinuated through the small talk. Except now I know who the piano was - Thelonious Monk. I'd deposited a flock of dimes to make sure the music didn't stop. The tunes were bluesy and wonderfully articulated and suited my mood exactly - complicated and lowdown.
Title:
"A rich widow, darling," Edna said, whispering over the faint music from the car radio, "Rich and beautiful and eager to please."
Edition:
Gold Medal  #s796, First Printing, August 1958
Cover:
Not bad, but not very appropriate as it looks more like a romance, not a mystery novel. According to pulpcovers.com, made by Ernest "Darcy" Chiriacka.
Cool lines:
The drink came and I put it away. It went down like water. Warm water. Question: How much scotch does it take to wash down murder? The man poured and I experimented.
Posted by Jure P. at 7:27 PM