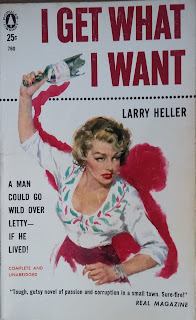 This one seems so obscure that it's not even listed on goodreads.com. So yes - I bought it simply for its badass cover and great title. But I did have a good feeling about it, and I'm happy to report that it was justified.

Three-part structure. We start off with the Gil Brewer-ish "boy meets girl" type of story, meaning that our couple ends up in the back of his car on their very first date. On the very first day they meet, I may add.

The middle part is where the plot thickens. Most of it takes place on a small island where our hero's residence is, so this isolated scenery gives the novel an extra edge and claustrophobic feel. Plus, another shady character enters the picture, so Jeff gets some additional worries besides his (by now) elusive love interest and her shady uncle.

By this point, it is all nicely set up for the final part that kicks off triggered by an accidental death of some local asshole (or was it really accidental?), and this is also where a nice twist takes place. The plot sidetracks a bit, and the author makes quite a savage attack on the small-town mentality. And I don't mean savage just figuratively because our hero is on the wrong end of the brutal beating (three pages!) by a local cop. Very hard-boiled and very good. After this nice little detour, the main plotline resumes and reaches its climax in a standoff on a small boat in the middle of the ocean. I've already used the words isolated and claustrophobic, right?

Nothing extraordinary about this one, but everything is a bit above average. I really liked it, and I'm keeping it in my collection. Not just for its badass cover.

Hero:
Jeff Tucker - an ordinary guy without much worry in the world. Until Letty comes along... 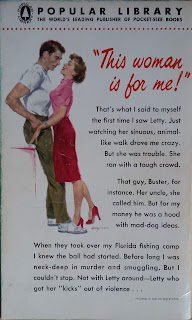 Bad guy(s):
You can read about Buster on the back cover, but let's not forget Daly - "a crafty son of a bitch".
Dames:
We have Helen Anders, his girlfriend with "a quiet, delicate mouth that was serene without being placid", but it's all about Letty, really. Once more, see the back cover for the details, but in short: "I don't know what it was, but the impact of this girl was incredible."
Location:
A small Florida fishing town called Sanibar, just off the Gulf of Mexico. Surrounded by the red tide - the ocean full of dead fish killed by some sort of a red germ. A nice touch that gives the novel an unsettling morbid feel of isolation and entrapment.
Body count:
3
Object of desire:
See the 'dames' section
Blackouts:
Jeff is a pretty tough guy, but he gets kicked around a lot in this one. It starts with a fight with some local drunk who harassed Letty (see the 'cover' section below) but on that occasion, he manages to "still cling to a thin edge of consciousness".
The first proper one happens when he's so lovesick that he drinks himself into oblivion and picks up a fight with some lads in a bar: "I can't remember anything but clash, chaos, and violence - and a great dark segment of wheeling sky in which the stars glittered like crushed glass."
Then comes the savage beating I mentioned earlier. Somehow, he's able to crawl away, and then "...somebody touched me on the shoulder and I screamed"
The last one happens in the final scene, where he confronts the bad guy. Jeff is armed with the speargun, and the other one has a gun - "I heard the zing of the released spear just before I passed out".
References:
I ordered two extra-dry martinis, and the waiter walked away with that kind of placid dignity they have in better restaurants where they know their tips will run at least twenty percent. He looked a little like Charles Boyer.
"He looks like Charles Boyer," I said to Letty.
"So what?" She kept making those crosses on the table-cloth.
"And that woman over there by the window, she looks like Greer Garson. If the bartender turns out to be Humphrey Bogart, we're in Key Largo."
"Very funny. Ha, ha."
And I agree with Letty. It's not very funny, especially since neither Boyer nor Garson is cast in Key Largo.
Title:
Very cool sounding but doesn't really relate to anybody or anything particular in the book.
Edition:
Popular Library #760, July 1956
Cover:
It's not a bottle, but an empty beer mug:
He was pretty drunk and hanging on her like an old overcoat. His right hand was in the small of her back, and he must have been trying to pull her in close because she arched away from him and turned a little, evading the knee he sought to push between her legs.
I pushed back my chair, but it was all over before I could get to my feet. Letty reached out, picked up an empty beer mug from the top of the juke box, and rapped him on the back of the head with it. She turned and walked away from him while he was staggering in dazed circles. She came back to the table and sat down.
Cool lines:
"I'll get you some day. You're going to trip again, and this time I'll get you for sure. And when they fry you," his eyes were mad, "I'll put a pan under you and catch the grease. And the next day I'll eat my pancakes in it!"
Posted by Jure P. at 11:05 PM