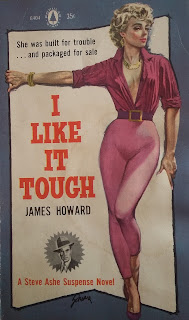 Do not be fooled (like I was) into thinking that the cover blonde likes it tough. Nope, that would be our hero Steve Ashe. At least this is the way he sees himself and you can read the details on the back cover. I do have a few reservations though. The guy practically suffers a nervous breakdown after his first kill and runs crying to his girlfriend because he "had to see someone - anyone he could talk to".

It gets better (worse?) - after the coffee (and not much talk btw), he finds himself on the couch, unable to sleep because his victim's terrified silent screams haunt him. Sure enough, his gal Fran is there to console him, and soon one thing leads to another but only to abruptly stop:

Suddenly all emotion drained out of him. Passion and gratitude, fear and anger were all gone, leaving only a great weariness. "I'm sorry, Fran," he heard himself mumble, as though from a long way off.
Just before sleep came, he found words again.
"You're a hell of a lot of woman," he said.
Then he was asleep.

Tough? Not in my book, you are not Stevie boy. And I hate to tell you this, but you also overcomplicate even the simplest things. Like buying a car, for example:

"Well, here's the set-up. We go to the first lot we can find and take a car out to try it. With that car we hunt up a second lot and one of us takes a car from there, each driving one while we return to the first one. Then on to the third lot and so on."
"Sounds like a fast way to shop."
"It is, and it saves a lot of cab fare and conversation. When I find what I want, then we'll stop and deal."
They followed the program Steve had outlined. It took about two hours and a considerable portion of man-and-undecided-wife dialogue before they left the seventh lot in a powerful sedan. It was Sylvia's calculated indecision which resulted in the price of the car coming down to a reasonable level.

Unfortunately, the criminals are also way too imaginative. The name of the game in this one is cocaine, and the smugglers pack the drugs wrapped around with ping pong balls and then dump them close to the shore, where they get collected by the skin diver. In shark-infested waters, I may add. Huh? Why not simply hand them over to the guy and have a beer or two? You can still use the trick with dumping drugs into the water, but only as a failsafe if you get raided by the cops. It's not exactly rocket science, and we have all seen Leone's Once Upon a Time in America, haven't we?

So it's not surprising that it runs for over 170 pages. But on the other hand, it's surprising that it runs for only 170 pages. It would have been twice as long if it weren't for some incredible coincidences and implausible story development. Without going too much into details (life's too short), I'll only mention that upon arriving in L.A., our Steve knows four people living in this megacity and half of them turn out to be the leaders of the mighty "syndicate"...

It may sound crazy enough to be funny, but it's not. It's just bad. Dull, unlikable characters trapped together with the reader in the plot that makes little sense. It doesn't even feel like some hastily put together yarn to pay the rent money. Instead, I had a feeling that the author put considerable effort into it. But it simply doesn't work.

But let us finish this on a positive note. I'll let you in on the secret about how can you tell whether your kids are addicted to pot.

"How do you know it's marijuana?"
"He has no sense of time - doesn't remember the passage of time or the sequence of things that happened. With marijuana, that's the surest sign. If he were on anything stronger he wouldn't have the drunken appearance, either." 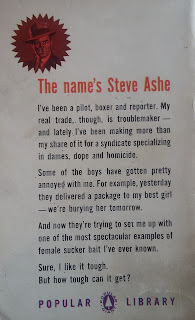 Hero:
See the back cover for how our hero describes himself. And below is how his nemesis perceives him:
"Obviously our information about you was correct. You are shrewd, perceptive and difficult to handle, just as we had been advised."
He's one of the vanishing race - an idealist. A hundred years ago he'd have been somebody's ranger. A thousand years ago he'd have gone off to wrestle some Saracen prince two falls out of three for the Holy Land.
The bad guy(s):
#2 is a disillusioned intellectual who "starved through nine years to get a doctorate in business and economics at Midwestern"
Dames:
Vicki aka victim #1
Gorgeous legs, a face for cold cream ads and a model's figure.
Sylvia Proatczek aka Spanish Annie
She had been a bright and personable girl, but her good qualities hadn't helped. Now she was hard, fighting furiously and blindly at the unyielding but unheeding town... Desirable in a hard sort of way
And if you were wondering about the Spanish Annie thing - it's a local jargon for a three-peso "item" well within the budget for almost anyone.
Frances Olson
The physical description would have appealed to anyone... Under the tailored tan jacket her breasts were firm and beautifully proportioned. Her legs were shapely and she used them well.
Dolores
Steve estimated that she was just past thirty, and that her short-cropped hennaed hair was several shades from its natural color. She was of a type common in the Hollywood district - good-looking enough to have nearly hit the big time, but carrying the scars which came from not having made it.
Our hero does score with Sylvia. I'm mentioning this only because it concludes the one true real laugh-out-loud, maybe even a bit kinky episode of the book. After his fiancé Vicki gets killed, Steve undertakes a 37-day Spartan regime before he sets off for his vendetta. But when he tracks down his man in some small town, he realizes that the asshole is quite a ladies man. And the realization makes him horny!?! I kid you fucking not, check this:
Steve cursed himself silently for the pressure of his own needs, built during his month of monasticism since his release from the hospital. He cursed the fact that his desire could be awakened by the knowledge that another man had found a woman, even in this dry desert town.
So much for the mourning of the love of his life. What an asshole!
Location:
It starts in a couple of small towns in Colorado called Lamar and Las Animas but then moves pretty quickly to L.A., where it also concludes.
Body count:
Corpse #1 probably doesn't qualify because it is a part of the previous Ashe adventure, which would be "I'll Get You Yet", published a year before this one. But it's so outrageous and funny that it deserves an honorary mention. Check this: the bad guy gets thrown from a horse into a nest of rattlesnakes!
The official first one is not bad either. Ashe's fiancée opens a package with a planted bomb, and the blast nearly tears her in two. For the next one, we need to wait for 100+ pages, and it is Vito - the killer who made Steve horny. The way this poor schmuck dies involves an incredibly complicated ploy that finishes with him and a shark. Or better said, with him inside the shark.
The next one is Jimmy the pusher, who kills himself because he is mortally afraid of the syndicate killing him???
And a final shootout that leaves three cold bodies.
So, altogether it's 6
The object of desire:
I'm not out to kill Vito. For a long time I thought that's what I wanted; I wanted to beat his brains out with my own hands. Now I know better. UI want the men above him. You've got a full-scale vice and narcotics operation with headquarters here. I want to help you break it.
Blackouts:
It opens with Steve being admitted into the hospital where he promptly blacks out. But, like the first killing, this too is a part of the recap of the previous book, so it doesn't really count.
References:
I've often wondered why artists have so much self-pity. You have a national reputation, equal to Norman Rockwell's. Your work is known and respected, yet you find nothing to do but drink.
Title:
See the back cover scan.
Dedicated to:
To A.C. - the model for Rogers Ashe
No, it's not a typo - Rogers is Steve's father. But who might the mysterious A.C. be?
Edition:
Popular Library - Giant #6404, January 1960 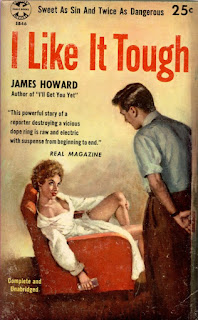 Cover:
Gorgeous one by Harry Schaare. He's not credited but you can see the signature at the bottom.
Also adding another one that I nicked from pulpcovers.com and that actually depicts the scene in which Steve runs into Dolores for the first time.
Interesting, seems like the same model was used for both covers.
Cool lines:
If one thing makes reading this book bearable, it would be its occasionally silly and slightly pretentious style with some genuine acrobatic language usages. Some of these below are beyond hilarious!
They looked at each other with the functional dumbness that comes to people with much to say and no words to fit the need.
The voice had the easy flexibility of a well-used razor strop.
Steve had recoiled with the sudden vehemence of Phil's verbal onslaught.
For a full minute Steve engaged in the useless luxury of unchecked profanity.
Steve ate slowly, sparingly, remembering that a full belly could produce the placidity and self-satisfaction he could not afford.
Beneath her white nylon blouse her breasts leaped free of the confining coat like two liberated animals.
Posted by Jure P. at 10:19 PM