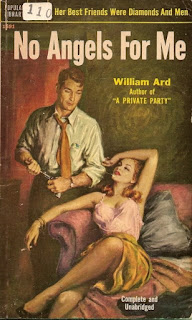 No messing around in this one. No hero's background, no family shit, etc. It opens with our main man Luke identifying the corpse of his gumshoeing colleague and then follows the genre's established rules. At least for a while.

It's one of those in which the investigation will be based on a list. Four names (suspects?) in this particular case and very soon things get quite complicated. But not so much that one can't follow even though not everything makes sense all the time.

As it moves on, a slightly annoying element of an amateur sleuth in form of the victim's kid sister Gloria is introduced. To make things worse, she's in love with our hero. Always has been... But to make things better straight away, it's not one of the usual silly puritanical romances. She's pretty cool (see the 'Cool Lines' section below) and, believe it or not, Luke and Gloria will actually end up in bed. Unmarried! And not just once, but twice.

In the meantime, the plot thickens further. Luke's boss has some secretive phone calls with the recently widowed wife of his other (obviously, now ex) investigator. So far pretty standard stuff and not bad at all. We are now approximately three-quarters through and expecting this to slowly unravel.

Wrong. It's actually about to really start!

After the second blackout (details, as always in the 'Blackouts' section below) Luke goes into some sort of a hyperactive berserker mode. He kills one (probably two) of his captors, storms into a club where he kills another dude, steals a million bucks worth of diamonds (safe was left open for some reason), and kidnaps beautiful Marta!!!

Believe it or not, it gets better still. He drives back to his flat but only to realize that the bad guys are waiting for him there. Which, btw shouldn't really have surprised him all that much since he just stole a shitload of  (technically theirs) diamonds. A high-speed chase follows on the busy streets of New York during which he gets so scared that at one point actually closes his eyes while driving through the red light! I think this was my favorite part. Simply priceless!

Craziness continues. Once he manages to lose his pursuers, he drives to Gloria's flat where they have a quickie while Marta (remember - the hostage) sleeps peacefully in the bedroom. After such a hectic night Luke simply goes to sleep. He'll take care of those diamonds in the morning.

And in the morning it will get even better but this post is (once again) running too long so I'd better wrap it up. And leave it to you to check it out.

Hilarious stuff, I loved it! What the hell was Ard thinking? Was the deadline really so tight that he couldn't make a quick revision of this madness? But then again, if this was revised, I somehow don't think it would be so memorable.

Hero:
Luke MacLane, private investigator
Dames:
A kid-turned-woman Gloria, all-but-insatiable nymphomaniac Helen, and Didi with enough height to distribute her comfortable-looking weight. All cool, beautiful, and interesting but still, blown away by beautiful Marta who is in a class all by itself:
She was neither tall nor short, only beautiful. A beautiful, black-haired, sloe-eyed woman who generated sexual excitement with every lithe movement of her magnificent figure.
Location:
New York and New Jersey
Body count:
4 confirmed and 2 very probable as Luke in his frenzy doesn't even bother to check whether they are dead or not
The object of desire:
"Diamonds. They insured a shipment for something called the Jewelers Exchange. The shipment disappeared off the pier. Two million dollars' worth of precious stones - gone into thin air."
MacLane's eyes were puzzled, but before he could voice the question, Heenahan's raised hand stopped him.
"We aren't hired to recover anything. Fidelis smells an inside job and all they want us to do is probe gently, nose around without any excitement and especially no gunplay."
No gunplay? Yeah, right!
Blackouts:
Two of them, none really remarkable. The first one is a standard blow from behind:
He stepped noiselessly inside, and from the sharp pain that seared the base of his skull, Luke thought the pier itself had crashed down on top of him.
And on the second occasion they slip a mickey in his whiskey:
Luke was helped through the drape but that was as far as his legs were going to carry him. As he swayed toward the floor, his last conscious thought was of Didi Marsh. And in the room the band played on.
But what deserves mentioning is the way he comes out. He awakes with his hands tied behind his back and guarded by a couple of hoods. When they are about to shoot him they spot that they had tied him using some complicated sailor knot which could lead the cops back to them. So they untie Luke and he seizes this opportunity to set himself free.
Great stuff and definitely in the top 10 of miracle rescues! Or at least in the top 10 of most original ones... Are these two guys consummate professionals or are they just plain stupid?
References:
A burlesque song he had first heard in his teens, then again in a Yokohama music hall. It was the one that goes, "I've got what you want, mister - something you don't get from your sister" - and it ends up that she's talking about a drink.
Sounds fun so I - of course - googled it and came up with a bunch of siblings bullying and abuse links. So much for Google's artificial intelligence...
Title:
Don't really know how to interpret it. There's some high-brow talk about the angels though:
"It's a rough, dirty business," Luke said. "You don't meet any angels."
"Then why was George in it? Why are you?"
MacLaine turned his head and looked at her.
"I don't know about your brother," he told her. "But I'm no angel myself."
"Neither am I," the girl said tensely. "Not when it comes to finding the person who killed George."
Edition:
Popular Library #591, June 1954
Cover:
Simply stunning, probably one of my favorites ever. Nothing special really - a guy with a gun and a beautiful woman with a cigarette... but it simply works. Pure noir.
Not credited and no visible signature. Any ideas?
Cool lines:
"Oh, Luke!" a woman cried.
Oh, hell, he thought.
"I think maybe the man needs a drink," she said.
"No. One wouldn't be enough. The taste in my mouth is too strong."
"Maybe a woman would help. A willing one, Luke, who wouldn't talk too much."
Posted by Jure P. at 10:31 PM