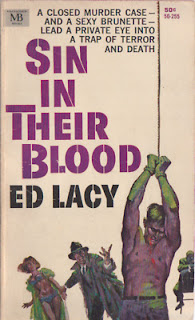 If such a sub-genre as left-wing pulp fiction exists, this one would be its prime example. Not only it does not shy away from themes of communist paranoia, anti-war sentiment, racism, homophobia, and feminism, but it actually uses these social issues as the plot devices. Cool and smart. But make no mistake - "Sin in Their Blood" is far from some liberal rambling. It's a terrific hard-boiled thriller.

Lacy really could write. This is only his third novel, but it reads like it was penned down by a seasoned professional. Simple is beautiful - fast pacing, a straightforward plot that's easy to follow but still offers a few nice twists, intriguing multi-faceted characters, and excellent use of dialogues. Our guy is no testosterone-driven superhero so instead of the usual flashy one-liners, we have plenty of more subtle lines that effectively create the atmosphere. Again, cool and smart.

It's not faultless. There are several slightly far-fetched coincidences and some not-easy-to-swallow plot developments. Can a cop really bring along his friend to the scene of a crime? Furthermore, is it normal for this cop to offer his buddy's services (our hero is an ex-private dick) to the main suspect?

But let's not dwell too much on these minor issues and instead pretentiously speculate that the author simply made a tradeoff (or two) in order to quicken the plot progress.

No masterpiece but still a very interesting and enjoyable page-turner. This is my 3rd or 4th Lacy and I'm beginning to think that this could be the beginning of a beautiful friendship and not just a brief acquaintance. Seems like the two of us will be spending more time together as this guy was quite prolific and his stuff is pretty affordable on eBay. So stay tuned.