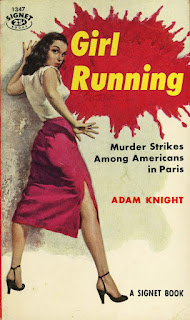 I keep giving chances to Mr. Knight but the guy just doesn't deliver the goods.

This one is even below his usual mediocracy of simplistic plots, dull characters, and uninspired dialogue. What makes it bad instead of simply not very good, is its mean and nasty spirit.

Women are broads, chicks, babes, and dolls. They don't speak. Instead, they ramble, rattle, babble, and bark. The promiscuous ones are automatically labeled as nymphomaniacs and public property. Homosexuals are nances and maggots. French people are - without exception - referred to as frogs and their customs are stupid. Pernod tastes like old licorice stick dripping and you can read about our hero's opinion on french women below in the 'dames' section of the facts.

Not hard-boiled. Nor gritty nor authentic. Just stupid and full of contempt. One cannot shake the feeling that the author had a grudge against everyone and everything. Many pulps featured in this blog were penned down quickly for quick rent cash. Some are politically incorrect and silly but that's okay. More often than not, such silliness even adds some charm.

Definitely not the case here. This one was written without much joy and I certainly didn't have much fun reading it. Skip it.

Hero:
"You're clever. You should be a detective."
"I am a detective."
She paused to study me. "I really believe you are. I've never met a detective, outside the little murder books. You don't look like a detective. You look like an overgrown jockey."
But not only Steve Conacher doesn't look like a detective, he sure as hell doesn't act like one. This guy's sleuthing methods are beyond laughable. He narrows down his suspects simply based on his personal dislikes of people. There is a guy who did nothing else but bought some artwork from the missing girl and because of that he immediately becomes "the most promising lead"!?
When Steve gets stuck in a dead-end (which of course happens quite often), he has this habit of breaking into the "suspect's" home looking for some (any!) clues. And when caught on one such occasion, he doesn't even try to talk his way out. Instead, he starts interrogating and intimidating the guy on the spot?? What an arrogant asshole!
And let's just briefly touch upon his ethics. Or better said, the lack of them. He has zero problems with fucking his client when the unfortunate gal is drunk and disturbed over some shitty news she just received.
Nope, he sure does not look like a detective.
Dames:
Plenty of them. We have siblings Peggy & Judy, wild Velma with a body built for Italian movies. mysterious night club owner Loretta with a heart of gold and last but not least a local girl Denise Marchand. Surprisingly, they are all intriguing characters and in the absence of a strong main protagonist, they are the best parts of the book. But unsurprisingly, they are all pretty undeveloped and stay two dimensional throughout. But what else would you expect anyway from a guy with this kind of a taste in women:
Models? Their figures sold them off to me. French high fashion dolls own no seductive bumps. They eat air to preserve their matchstick slimness. They moved gracefully, chattering up a small storm but setting off no internal yen in me. Their lack of fleshy curves in the upper torso made me wonder about Dior's last publicity stunt. He could have been serious about designing fashions for these lumpless, sexless babes.
Location:
Paris. And this choice of locale poses a bit of a mystery. To be slightly mean myself, it's the only real mystery in Girl Running.
Chapters are titled using the various locations and their addresses (a nice touch, I'll admit that) and one site is even mentioned in the dedication (see below) so it's clear that there is some personal connection between the author and the city of lights and love.
Why the mystery? Because there's no real reason for the story to take place in Paris. It could be just as easily told in Conacher's native New York among the artists and bohemians of Greenwich Village. I mean, most of the people he interacts with are Americans and he gets to know everyone the very first day upon his arrival... 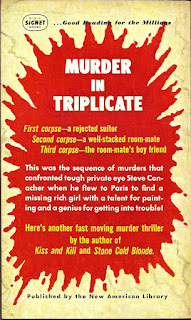 Body count:
3. See the details on the back cover scan
The object of desire:
This one too is unclear. Steve is initially hired by Peggy to break up the relationship her sister Judy is having. But the unfortunate suiter is corpse #1 so he gets reassigned to finding Judy.
Btw, there's a particularly painful paragraph on skip tracing 101 by Steve that we need to endure. But I won't bother myself with retyping it and you with reading it. If you own a copy, you can find it yourself on page 86. Spoiler - you won't be learning much...
Blackouts:
He hit me again, this time swinging low to my midsection. The gutbuckling panic of nausea swept over me. My body went dead, caught in the reflex of pain and shock. I was in a black room, yelling for breath. I was buckled and bent like a Moslem at prayer.
Then everything died for me.
And it closes with another one:
"Monsieur?" he asked.
It was Gaston.
"Vive la France," I mumbled.
Then the lights went out for me.
References:
Nothing could shake this frog's calm and self-assurance. He would play the Adolphe Menjou role in the middle of a massacre. He was slow and sincere.
It was all very tight and neat, as well staged as a Hammett incident. And twice as frightening.

Title:
I guess the running girl is Judy.
Dedicated to:
Pierre Brissaud and memories of the Place des Vosges
Edition:
Signet 1347, First Printing October 1956
Cover:
Nice one by Paul Rader. She's not running but certainly looks french and definitely not lacking fleshy curves in the upper torso.
Cool lines:
Well, this is as snappy and witty as the dialogues go in this one:
"I hope I've helped you, Conacher."
"Like a hole in the head," I said. "But I'll be talking to you again."
"Come now, let's not make a habit of it."
"I'm loaded with bad habits."
Posted by Jure P. at 12:19 AM