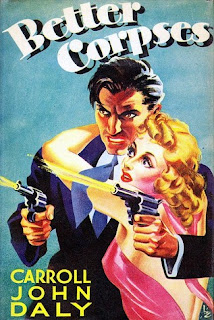 I started to read Susanna Lee's "Detectives in the Shadows: A Hard-Boiled History" but just had to put it aside after the first chapter. Simply got too intrigued about the author Carroll John Daly and his badass protagonist Race Williams.
Apparently, Daly was an agoraphobic bookworm, so out of touch with the real world that once he even got lost on his way back from Manhattan to his suburban home. Another anecdote tells that the guy got arrested and charged with carrying a concealed weapon after buying the gun and wandering around the city. You see, he just wanted to experience how it feels like to carry the real gun!

Now that's what I call proper research! Hillarious stuff. But still, nothing really special when compared to Race Williams. According to Ms Lee, Race's first appearance was in Black Mask's 1923 KKK special issue in the story titled "Knights of the Open Palm" in which he seriously considers joining the Klan. He finally decides against it because - now check this out! - joining would be “mighty bad” simply because if he were about to shoot someone and that someone showed himself to be a member of the Klan, because of the rules, Williams would have to drop his gun.

So, academic Detectives in the Shadows went temporarily back on the shelf and I started with Better Corpses not knowing exactly what to expect but certainly anticipating something special.

And something special I got. Delivered in spades! This thing is complete and total insanity. If Hammett is godfather to 90 per cent of the authors on this blog, such accolade can safely be awarded to Mr Daly for the remaining 10 per cent. I know now where the weirdos like Mike Avallone came from. And all the destroyers, penetrators, executioners, inquisitors, liquidators, exterminators, and countless other action adventurers men.

I have this one in digital format so the facts section below will be a bit of copy & paste extravaganza. You cannot blame me really as the whole thing is infinitely quotable. I won't even try to write a review. It would take me too long and there's no way I can do justice to this little forgotten oddity. Instead, I encourage you to go through my selection of excerpts and I'm pretty sure you'll get the idea about this one. And also have a laugh or two along the way. I certainly have had plenty of them and Daly with his Race is now firmly on my eBay saved searches list.

Hero:
"You're looking for trouble, eh?"
"I'm always looking for trouble. Name of Williams—Race Williams. Now what?"
"So you're Williams." He curled up his lips and shot the words through the side of it, just like a Hollywood bad man. "The wise dick, Race Williams—smartest gunman in the racket."
We can't all take sudden and violent death followed by a kidnapping as I can since it’s my business.
Good work? Of course, it was good work. But there wasn't anything especially clever about it. I know my business.
Yep, you could chuck me out of an airplane ten thousand feet in the air, and when I hit the ground I'd have a couple of rods in my fists. Would I use them? Well, that part is doubtful.[The Coolest!]
A big moment that? A hair-raising thrill? Well, maybe if you're a lad who doesn't get around. But it was nothing to me.
You think I'm not running true to form? Maybe that's true. I never pretended to run true to form. In plain words, I can't be coaxed, cajoled or pushed into anything by sentiment. But what's more I can't be scared out of anything by threats.
It's fear that makes a man's hand slow, and his fingers thumbs when he had to draw to make his kill. That's my stock-intrade. The creating of fear.
Me. I don't like twenty twos. When I put a hole in a guy I don't embarrass half a dozen doctors who try to find it. My motto is: There isn't much sense in shooting the same guy over and over. It smacks too much of crooked wrestling and the return engagements.
I'm not a sentimental fool. Anyone who knows me knows that. Oh, if it comes to a showdown, I'll die for a cause, but I'd much rather kill the cause and live for another one.[The Coolest!]
Did I hit it? Hell—you know me. I don't shoot at things I don't hit.
The bad guy(s):
As one would expect, more superlatives here:
Yep, facing a man who held a tommy gun; a tommy gun that was directed straight at my chest. And the man was Gunner Slade, the meanest, dirtiest murderer in the entire city.
Sleek black hair, soft oily skin, long, slender neatly manicured fingers lay upon the whiteness of the table cloth. I don't have to tell you. It was Armin Loring—One Man Armin—the most dangerous man in the city of New York.
Raftner is also supposed to be here in New York. He's the biggest narcotic agent in the world. 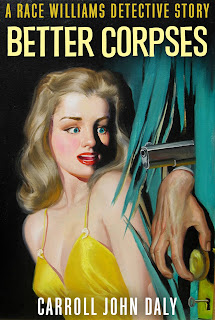 Dames:
Damsel in distress is Mary Morse, cleanpussed (?) and with "damn good figure—both physically and financially" but it's all about The Flame really - Race's ex-lover, now adversary.
Her face was hard, determined, the face of a woman who had lived. Yet, I knew that face could be young and soft and beautiful. That's right. I knew the woman. It was the Flame. Florence Drummond. The Girl with the Criminal Mind. A woman of good—a woman of evil. Take your choice.
The Flame. Sure, the name had come from the many "moths" she had destroyed. Yep, it was written in the book of the night that to love the Flame was to die.
You won't argue with me, Race, when I say that the Flame is the most beautiful and the most dangerous woman in New York. And today she was with the most dangerous man in New York—Armin Loring. That's a combination a single man can't beat—no, not even a single man like you. Women are dangerous to men in the racket.
Location:
New York
Body count:
Before the countdown, let's first have some of the Race's profound inner-thoughts and contemplations that will help put this bloodbath into a context:
Of course, it was dangerous, but it wasn't sure death by any means—at least not for me. Shooting is like swimming. It's hard to get started, but once you're in, things go along all right.[The Coolest!]
I don't know what he saw in my eyes, but it was there. I knew it was there. I had it—felt it as any common gunman ever felt it. The urge to kill. The desire to kill. Yes, by God, the lust to kill.
Yep, I felt good. I had laid down the law, the only law Gentle Jim Corrigan, Armin Loring, and their kind knew. The law of the night. The law of the gun. The law of death by violence. That was talk these boys understood and didn't have any answers ready. No influence, political or otherwise ever fixed things for a corpse.
My ethics may be peculiar, but the only thing I could see wrong about the whole affair was that I hadn't shot Gentle Jim.
And now the body count. In order of disappearance:
Which one is your favourite? I cannot decide; #9 is great but can it beat #7's "I'd do the doing and the figure would do the dying."?
And to see whether you were paying attention, let's do a quick little morbid quiz:
Blackouts:
I sank then, but just before I passed out of the picture I got my speech in.
"Thank you, Lieutenant," I said. "When better corpses are made, Race Williams will make them." 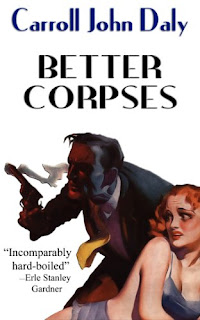 Cool Blurbs:
Erle Stanley Gardner's "Incomparably hard-boiled" is spot on.
Title:
See the 'Blackouts' section above.
Edition:
eBook
Cover:
Found several covers online. All cool, my favourite would be the one with white background in which Race looks seriously pissed off.
Cool lines:
My answer will show you the kind of humor I was in.
"If they follow us and catch us," I told her flat, "I'll mess up that damned park so that the city will have to hire a dozen new street cleaners before morning."
"Rats," I said as they turned back. "Make a move and I'll open you up—one, two, three—and see what you had for supper."
Port is, no doubt, damn good for some people, maybe for him. But I'm no invalid, and I like my liquor to burn me.
A couple of memorable WTFs:
CONCEITED? Sure, I’m conceited. So are you. Did I like it or didn't I like it? I don't know. I couldn't think about it. I could think only of one thing—five things. Yep, I should have buried that gun full of lead in Gentle Jim's middle and not just talked about it. Action is my strength, not conversation.
Would I have killed Jim? I don't know so you don't know.[The Coolest!]
And one last that tops them all:
God! God! God! I don't know if I prayed or blasphemed, but I hoped—yes, and meant to pray; pray that I was free; pray that I was free to kill.[The Coolest!]
Posted by Jure P. at 8:08 PM