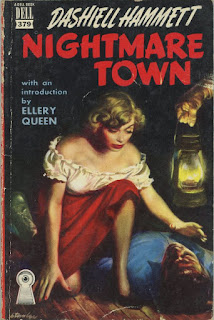 Last week marked the 60th anniversary of Hammett's death, so a quick tribute post is more than appropriate. After all, the guy can easily be considered godfather to 90% of the authors featured on this blog.

A nice collection of three novelettes and one tiny, not even four pages long story titled Albert Pastor at Home. Amusing (obviously) quick read, published in Esquire magazine in 1933. But even more funny is the anecdote about its origin provided by Ellery Queenin in his warm introduction. Apparently, Hammett's agent had sold one story "exclusively" to two magazines, and Dashiell just penned this one quickly to solve the dispute! Oh, the good ol' days...

Two of the stories feature Continental Op. Scorched Face and Corkscrew were both published in 1925, and it shows because they are both heavily influenced by the western genre. Especially the latter one, which is a decent take on Yojimbo Red Harvest theme of the two gangs in a town not big enough for both of them.

Good stuff, but I liked the Scorched Face better. A terrific plot, snappy street-wise dialogue, loads of action, authentic in describing the machinery of a big detective agency. Plus, our Op hero has never been so doggedly determined to break the case. What spoiled it a bit for me was this totally over the top raid and shootout at the end. I prefer my detectives to be a bit subtler.

But the real prize of this collection is the titular Nightmare Town. Written in 1924, it precedes Hammett's hard-boiled bible Red Harvest for a few years. They are similar thematically, but this one is cruder and much crazier. It's like watching a 70s Italian Giallo where nothing really makes sense, but you don't mind all that much because everything is so stylish, and all the women are beautiful (and usually beautifully murdered). But the confusion here is created intentionally, and our hero is as lost amid all the WTFs as we are:

Was there never to be an end to this piling of mystery upon mystery, of violence upon violence? He had the sensation of being caught in a monstrous net – a net without beginning or end, and whose meshes were slimy with blood. Nausea – spiritual and physical – gripped him, held him impotent.

Mystery does get resolved, and this resolution is what makes Nightmare Town memorable. It's so preposterous and bonkers that - after the initial amazement - it actually makes sense. At least it made sense to me. If you like the final act of Jim Thompson's The Getaway, there's no way you won't like this one. And, for the record, I fucking love The Getaway!

Speaking of closing acts, this one also finishes a bit surreal. To draw an analogy with movies once again, it reminded me of Invasion of the Body Snatchers with our surviving couple fleeing the chaos (corruption?) behind them. Again, maybe not. Maybe it's not symbolic at all, and I only saw what I wanted to see. But in any case, it's brilliant stuff.
The beginning of the year is time for resolutions, so here's mine. No, I will not stop smoking. Instead, I'll complete my Hammett's Dell collection. One down, five to go! If you have any spare copies willing to trade or sell, you are welcome to drop me a message.

Hero:
2 x Continental Op
1 x Steve Threefall:
"Is that your real name?" the marshal asked.
"Of course it is," the justice snapped. "You don't think anybody'd be damn fool enough to give a name like that unless it was his, do you?"
Dames:
These are all tough, masculine stories with no strong female characters. It has to be said though that the guys are not testosterone-fueled machos and gals are not dumb blond bimbos in need to be rescued.
I'm pretty sure that Clio Landes from Corkscrew would be fun to hang out with:
A thin girl of maybe twenty-five, with too-bright dark eyes, dark, short hair, and a sharp prettiness that was the mark of a larger settlement than this. You've seen her, or her sisters, in the larger cities, in the places that get going after the theaters let out.
Location:
See the Dell map for details. 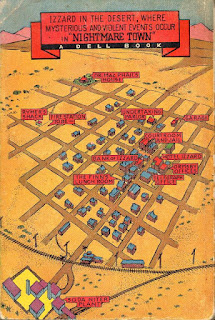 "A tough town, is it?" Steve asked.
"Couldn't help being! It's only three years old – and a desert boom town draws the tough boys."
The town – I can't get accustomed to it. It's so bleak. No children play in the streets. The people are different from those I've! Known – cruder, more brutal. Even the houses – street after street of them without curtains in the windows, without flowers. No grass in the yards, No trees.
There's a hundred corporations in Izzard that are nothing but addresses on letterheads – but stock certificates and bonds have been sold in them from one end of these United States to the other.
The last one is indeed quite prophetic. And since this post has several movie references, I'll give you another one. Louise-Michel from Benoît Delépine and Gustave Kervern takes the piss out of these tax "optimizing" letterbox companies in a really smart and funny way. I like everything that these two guys have been doing, and Louise-Michel ranks among the top 3 of their movies. Highly recommended!
Body count:
5 + 5 + 0 + 8 (excluding the pony) = 18
Blackouts:
There's one in Corkscrew after our hero is wounded in a duel:
I missed whatever else he said. The numbness was leaving my side, and the feeling that came in its place wasn't pleasant. Everything stirred inside me...
Title:
See 'Location' section
Edition:
Dell #379
In his introduction, Ellery Queen mentions that Nightmare Town appears in print for the first time since it was published in Argosy All-Story Weekly twenty-six years ago. Which, according to Wikipedia, was in 1924. There's no printing date information, but it's pretty safe to assume it's 1950 at the earliest.
Cover:
By Robert Stanley. Very noir-ish, it blends nicely into the nightmarish atmosphere of Nightmare Town.
Cool lines:
A sleek-haired young man whose very nice manners and clothes completely hid anything else - brains for instance - he might have had. He was very willing to help me, and he knew nothing. It took him a long time to tell me so. A nice boy.
That was nice. The crazier the people you are sleuthing act, as a rule, the nearer you are to an ending of your troubles.
For answer to that I got a lot of information about myself, my habits, my ancestors. None of it happened to be truth, but it was colorful.
Posted by Jure P. at 11:47 AM