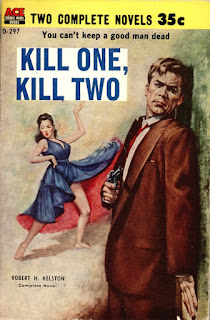 Things are looking just grand for Allen McCoy. He is an engineer that just completed building a dam in Mexican town Monterrey and is now expecting to receive a lucrative offer for working on an even bigger one in Guadalajara. Townfolks are so appreciative that they named the new dam's artificial lake after him. Not to mention that during his stay he has enjoyed a special kind of "appreciation" from Juanita and Lucy, the town's two loveliest ladies.

All this goes to shit on his farewell night when he gets framed for killing Raul. Raul was the estranged husband of Juanita and had left her for Emily. Emily is now with the sleazy lawyer Arturo Garcia whose brother is a local police captain. So captain and our hero form an alliance (of sorts) in order to get to the bottom of the killing. In short - everyone is deceiving and lying to everyone. We are in Mexico so (obviously) there will be narcotics involved.

A whirlpool of intrigue and murder with an innocent man turned amateur detective trying to prove his innocence. Not exactly my cup of tea but this time, I'm happy to report, it is an exception that proves the rule.

The story is believable, its plot makes sense and is easy enough to follow, characters are interesting and not two-dimensional. But what makes it memorable is the authentic atmosphere. Lots of double talk and threats (often disguised as polite suggestions) so pretty soon the reader (and Allen too) needs to learn to read between the lines. It's a neat narrative trick that also serves to build our hero's character as a foreigner who has to adapt to the local customs. There's a great and pretty eerie scene in which he has to talk his way out of some dark shack while a hood is standing behind him with a switchblade waiting for Allen to slip in his "negotiations". Intense. No action, the whole ambient is built on dialogue alone.

Good stuff but not flawless. McCoy could be a bit more hard-boiled hero and should kick some ass instead of slapping women around. Plus, the climax takes way too long so it loses most of the intensity.

I have never heard of Robert H. Kelston before and the reason I picked this one up was that it is paired with Peter Rabe's The Cut of the Whip in the Ace double edition. So I was intrigued a bit and googled the guy and came up with only this nice article. Seems like this was Kelston's only effort. And this is my effort to give him a tiny part in digital posterity.

Hero:
Allen McCoy
Dames:
Juanita Aguilar - Like Peter Pan, she lost her shadow.
Emily - When men left her it was for an appointment with death.
Location:
Mexican small border towns of Monterrey and Laredo.
“What a country!” Allen agreed. A country where one dame told you someone else’s husband was missing and where the missing man’s wife didn’t care about him but wanted a redheaded American engineer.
Body count:
5
The object of desire:
“I don’t know who pushed him,” he admitted. “But I’m going to find out. I can’t leave Monterrey and I can’t work anywhere in Mexico until I do find out."
References:
It all began, he remembered, when the band played Guadalajara. It was like a symbol. Now everyone was playing Guadalajara for him, that and Get Out of Town. And the band had played Guadalajara badly, he remembered; even through the tequila he had noticed that.
Cool Blurbs:
You can’t keep a good man dead
Title:
Not sure how to interpret it. It surely does not reflect the correct body count.
Edition:
Ace Double D-297
Cover:
Feels a bit sloppy and hastily copy/pasted together. They should at least fix the white background of the title...
Cool lines:
/
Posted by Jure P. at 1:19 PM