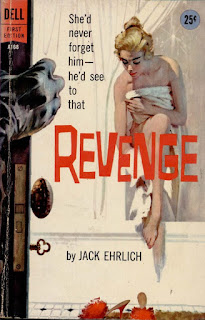 Hero:
John Cummings. A prototype of a young white male suburban middle-class guy. Former high-school football star, former DA assistant, these days not the most prosperous lawyer but a quite efficient criminal with a decent strike rate. Also 100% psychopath.
Dames:
His ex-wife Lou, his rape victim Jennie a.k.a. Mrs. John Frederick Fitch French III (!!) and his most recent romantic and emotional confusion personified called Sue. But they are pretty much dehumanized and we never really get a chance to know them better. I mean, check out his opinion of Sue and bear in mind that she gets the kindest share of his misogyny comparing to the other two:
Sue is a hell of a feminine dame and her clean freshness is more exciting than the most sultry slut.
Location:
A small town near New York
Body count:
1
The object of desire:
John is pissed off at the whole wide world and takes revenge against it.
Blackouts:
There was no pain at all, that's the funny thing. I had to fight to keep my mind concentrating. A lot of thoughts kept crowding in which had nothing to do with me. I tried to talk to myself but the gray blur came closer and closer to me and blanketed me.
References:
Then I piled the hi-fi full of records, mostly piano concertos. I put the Emperor Concerto on last because it's my favorite and played on two sides. I could flip the stack after the first playing and hear the ending of the Emperor in the right sequence.
Title:
See "The object of desire" section above
Edition:
Dell #A168, First Edition, October 1958
Cover:
By McGinnis. One of those creepy, unsettling ones that make you feel like a voyeur and give you a bit of a guilty conscience for liking it.
Cool lines:
I maintained a detached interest in Lou's life like a man does in common stock which he sold too early and is now doing great things.
I felt revengeful and full of loathing and I felt the small and insignificant feeling a man gets when he gets looked over during a job interview.
Bit by bit, my practice was dropping off more every month. The golden degree tacked onto the Cummings name was fading into an oxidized bronze. It didn't matter, but it galled me because it proved people had more sense than I was willing to admit.
It was like a fever. Ideas and thoughts kept parading through my mind and I watched them like a bored jazz fan at the opera.
Posted by Jure P. at 9:34 PM