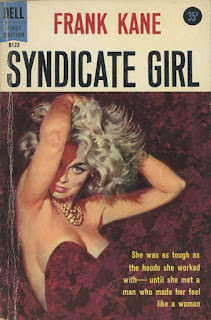 It starts with a bang. Several bangs actually: a judge is assassinated, his wife witnesses the killing, so she becomes collateral damage, a crooked cop frames a good cop for the hit, and finally - to make it sure, I guess - the mobsters kill him and stage his death as a suicide.

And the best part is that all this mayhem is orchestrated by a woman. The woman! The titular Syndicate Girl goes by the name of Mary Lister. She's a mob fixer and the top dog's messenger, later described as "more lethal than the atom bomb". Wow! Not often do we come across such a badass heroine in these old paperbacks.

But on page 24 (after the job well done), she departs for the airport, and we need to wait until page 167 for her to reappear. And when she does, we find her contemplating a cruise with her mafioso hubby because "the things are pretty quiet, and it's been a long time since we were away alone". And her man is planning to pull out of the rackets altogether.

So much for the atom bomb...

But anyway, our syndicate girl will never make that cruise. She packs her stuff and flies back to Jackson City to give this sleeper's remaining 25 pages at least some kind of a climax. Although, at this point, I pretty much stopped caring about how it finishes as long as it would be soon.

You may ask what happens in those 143 pages when she's not around? Nothing really worth reporting. Yet another Eliot Ness story about fighting corruption and ties between the politicians, mobsters, and media. Painfully slow and predictable.

This is my third or fourth Kane's non-Liddell book, and I'm losing my patience.

Hero:
Mal Waters, a high-school football hero who went on to greater glory at Harvard law school, interrupted his studies to serve his time as a squadron leader in Korea and finally returned to his home town to become the D.A.

The bad guy(s):
Sylvan Murphy, top brains in the Syndicate. It was he who first saw the opportunities and advantages of organizing crime on a businesslike basis throughout the country.

I disagree with this, especially after recently spending a week in Sicily where I visited the No Mafia museum in Palermo.


Dames:
Besides Mary, there are several other tall and well-proportioned gals:
In all fairness, there actually is one cliche that the author manages to avoid. After being dumped by the cold and calculating Rita, our hero doesn't end up with Marta even though she's extremely honest, caring, understanding, etc.

Way too low considering that we get the first three corpses in the opening chapter and that the book is almost 200 pages long. Should definitely be more. If nothing else, the two top dogs and both henchmen survive this one.

Also worth mentioning is that the whole episode about Bonnie's death and framing Mel is a blatant copy&paste from Kane's Green Light for Death published ten years earlier. Almost two pages, word by word.

The object of desire:
There's a cancer eating at this town. You can cover it up, but that doesn't stop it from eating. The only way to fight it is to tear it out of by the roots. That's what I intend to do.

Blackouts:
He was dizzily aware of a sinking sensation, then the ground came up and hit him in the face.

He tried to turn over, the floor tiled sickeningly and he slid into a merciful black void which erased the white-hot flashes and the searing pain from his skull.
Joey stared down at him without expression. "I don't think he's likely to get telephonitis in the next hour."

Cool Blurbs:
She was as tough as the hoods she worked with - until she met a man who made her feel like a woman

Not that cool, I'll admit. But decided to include it because it's totally false. No sparks, except a few leaded ones, are flying between Mary and Mal.

Title:
Well, even though Mary is not really the heroine, the title "Syndicate Girl" is much more cool-sounding than "D.A. Boy"

Cover:
By McGinnis. One of his rare ones with no long legs, but still no less astounding.

Cool lines:
The killer hesitated for a moment, as though debating the advisability of making sure of the second kill. Instead he sprinted across the lawn to a row of hemlocks that had been planted to insure privacy. He melted into the shadows, satisfied there was no immediate pursuit.
Posted by Jure P. at 9:33 PM