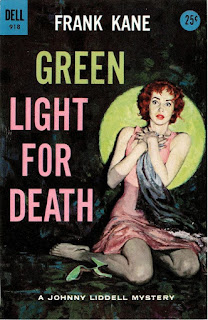 We are used to efficient private sleuths, but Johnny Liddell tops them all in this one. Check out the recap of his first day on this case:

Talking about a slow day in the office!

And we are not even halfway through. Thankfully, by now Mr Kane had sorted out his misconceptions about the time/space constraints and so Liddell's second-day appointment book is much thinner. He sleeps until noon, meets his reporter sidekick, obtains a pint bottle of Cognac, uses it to extract some info from a beautiful blonde, has sex with her (the blonde, not the bottle), attends a briefing with his happy cop sidekick, and goes back to his hotel to take a nap! It's 8.45pm.

As brief as this segment is, it does give us the craziest part of the book. Liddell comes across a photo of some unidentified guy and promptly decides to charter a plane to send it to the New York agency headquarter so they can help him with identification. Furthermore, it's imperative that this photo gets back quickly, so his inside man doesn't get compromised. Therefore he makes his booking a round trip!

So yeah, our hero is now out of steam, and the author is out of ideas. For the remaining 100 pages Johnny will gradually abandon logical thinking and a subtle approach to the investigation and instead rely on brute force. The whole thing dissolves into a mess with a far-fetched premise, silly twist, and resolution that one can see coming way ahead. Kind of a sloppy imitation of Hammett's Red Harvest. One of those that give you the impression that the author did have some initial concept but was simply too lazy to develop it.

But despite all that, or maybe because of all that, it works really well. Even if you can't appreciate the chaotic storytelling and find our hero's relentless (even though not always rational) pursuit of justice a bit silly, you'll find plenty of charm in this one.

Hero:
This is only the second one of the series, and Liddell is still working for an Acme Agency (that could explain why he can afford to charter planes for his mail delivery, right?), but he already has quite a rep:

"So you're the guy Nancy did all the raving about. To hear her go on, you're a cross between Sam Spade and Ellery Queen with a little Superman thrown in one the side."

The bad guy(s):
"This guy Mike Lane. What about him?"
"Bad business. The local Lucky Luciano and Buggsy Siegel rolled up into one. He looks fat and soft but he's strictly rattlesnake."

You did catch the misspelling of Buggsy Siegel, didn't you?

Blackouts:
Two of them. First, his ass gets kicked by the hoodlums:

He knew he was slipping, fought to maintain consciousness. There was another blinding flash behind his ear and he sank quietly into the engulfing depths of the black blot.

And a chapter later by the cops:

He hardly felt the rabbit punch that felled him, dropped across the unconscious body on the floor as though the ground had been moved out from under him.

Title:
"What's the green light mean?"
"It means the guy's a stoolie or a flycop. The floor men are to keep an eye on him while he's in the joint. When he leaves, we signal the boss here, and he arranges for him to get taken care of."
Liddell nodded. "Green for death. That's what I thought."

And this deserves some explanation. There's a major counterfeit money operation taking place in the Villa Rouge nightclub. The way it works is that when the big-time hoodlums (you know, from Chi) come to the place for the first time, the yellow stage light marks them. This triggers their background check, and they'll get either the red or green spotlight next time. You already know what the green means, but red indicates to Casino croupiers to let them win on the (obviously) rigged roulette tables so they can cash out their (counterfeit) money. This convoluted gimmick serves the purpose that they never know who the seller of counterfeit money is.

So yes, the whole thing is a bit bonkers. Leaving aside the unfortunate choice of colours (green for death, red for money?), I wonder if it doesn't violate the basic principle of trust between criminals. Would you really go into the counterfeit money laundry business with somebody you didn't know?

Dedicated to:
TO MY MOTHER
with my deepest affection and gratitude 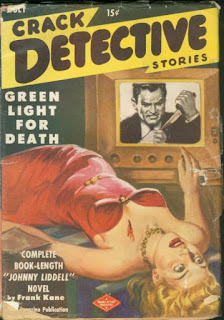 There's no printing info on my copy which is a bit confusing. You see, it was copyrighted in 1949, but the novel actually takes place around 1955. Did I read a science-fiction story? Is my copy some hard-to-find collector item with the erratum on pg 116?

I googled it a bit and noticed it had been republished several times and that it also came out as a serial. So maybe my Dell edition came out later and was slightly altered since there's no usual "unabridged" note on the cover.

Doesn't really matter. I'm including a cool cover of one Crack Detective stories issue here, and you can download another one here. 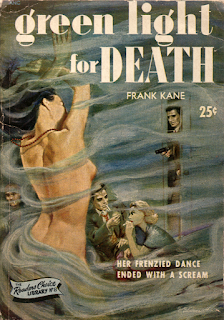 The cops in this town are so crooked they could hide behind a corkscrew without throwing a shadow.[The Coolest!]

The combination of her low-cut dress and Liddell's vantage point made the effect one of which Johnny eminently approved.

Back at the bar he ordered another brandy, tossed it off with a grimace. He was debating the advisibility of another to keep that one steady in his stomach when someone tapped him on the shoulder.

He cut off the sputtering from the other end by the simple expedient of dropping the receiver on the hook.
Posted by Jure P. at 11:28 PM