What the hell, let's quickly do another Carter Brown.

This one has a bit of Agatha Christie's feel about it. There is a closed group of unconventional characters and most of the action takes place in some secluded house. A thing to mention about this cast is that there's really no need for any of them to be particularly extraordinary. It does neither help nor hurt the story itself.

But, I guess, everything in Carter Brown universe must be over the top and it would be silly to complain about the lack of realism and sloppy characterization. Let's instead move on and take a look at our hero.

Al Wheeler certainly is no Hercule Poirot and resembles more of something like the clueless Inspector Clouseau from the Pink Panther series. Especially in the first half which ends with the failure of his ingenious plan to lure the killer into a trap. During the ambush, our man messes things up, gets knocked off, and - upon awaking - discovers the additional corpse that he now needs to deal with. But the blow on his head seems to do him some good because he gets his shit together and starts a proper investigation.

So the second half is much better as the plot actually thickens and the pace accelerates to a memorable and bizarre ending. Wheeler makes yet another fuckup that results in a shootout and a bunch of fresh corpses. There's this shy, fragile, young secretary Ellen who was abused both physically and mentally before this climax and is now understandably shaken and terrified by the whole ordeal. And yet, the bloodbath makes her horny!!?! So guess how she and our hero decide to calm themselves down for half an hour that the law will need to get to the scene. Needles to say, the sex act will happen off the page.

And there's another instance of such sex & violence weirdness. Just as crazy as the one above.

Sexy Bella is needling and teasing our hero right from page one. But once she starts ridiculing his virility, he snaps and... basically starts raping her. The whole package - ripping off her clothes, twisting her arm, her struggling and crying... The whole page of such shit. He does regain his senses just in time and (I think) is ashamed of his attempt but then it comes: "What made you stop?" and "Maybe that'll teach you not to reject an unconditional surrender when a girl offers one!"

It's just stupid. Stupid for all the usual reasons but also because it's totally redundant since it adds nothing in terms of plot progressing or character development. Would argue that the book is not misogynistic and just as sexists as most of the pulpy stuff written in that period. So these isolated episodes don't feel genuinely mean or nasty, they are more like something thrown in with the intention of adding a bit of spice. I wouldn't be surprised to learn that stuff like this was encouraged by the publishers in order to stir some controversy that would boost sales.

In any case, it's a shame since it tarnishes otherwise more than a decent book.

Hero:
Me, I'm a cop, but I look like a bum actor in search of a middle-aged matron worth her over-weight in diamonds.

The bad guy(s):
Tino Martens had been in the rackets since maybe the first time he whipped a diaper off the kid in the next cradle when the kid wasn't looking.


Dames:
Isobel Woods, Tom's daughter
A tall blonde, with her hair hanging down across one eye, and the build of a female Viking.

Ellen Mitchell, Tom's secretary
She had an intelligent, elfin face, and the kind of figure I started dreaming of way back when I first realized a honeymoon wasn't for eating.

And my favorite - Pearl, the ex-stripper, now Tom's spouse.
"I bet you look just the way Jean Harlow used to look," I said sincerely.

Blackouts:
The usual stuff with explosions and pitch-black void:

Then the sky fell on my head, and the world drifted down around my face slowly, the pieces disintegrating in sharp, painful explosions of white light inside my skull. I could see the brilliant flashes and I knew the explosions had to be outside, but I felt the pain inside. Then suddenly it was all over, and I drifted comfortably in a pitch-black void, peaceful as the womb.

But the way he comes out afterward is pretty original:

I was still swaying gently, like a teen-ager exposed to rock and roll for the first time.

References:
"Was it Jung who said the mind is its own censor - that we live in the same world, but to each individual it's a different world, that no happening or incident is the same to any two people?"
"I wouldn't know," I told her. "I do know it was Wheeler who asked the question and you haven't answered it yet."

I put Ellington's "Indigos" on the hi-fi machine because it made superb mood music right then. Most of the song titles seemed an accurate forecast of my future - "Solitude" - "Autumn Leaves" - and the rest of them.

I was listening to this record while writing the review and really liked it. Just gloomy and melancholic enough for these strange covid-19 days

Title:
Not sure to whom this is supposed to refer. True, all three women are desired, but none of the killings is a crime of passion.

Cover:
By McGinnis. From that perspective, shouldn't the mirror reflect her body? 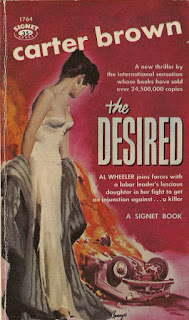 Cool lines:
Around one-thirty in the afternoon, Doc Murphy bounced into the apartment. He ripped off the bandages with the loving tenderness of a barracuda shark taking a sample bite out of a well-upholstered girl swimmer.
"Huh!" he grunted when the last bandage had been torn off. "The most amazing thing about you, Wheeler, is that you're healthy!"
"It's just clean living, Doc," I said modestly. "I live by the rules - the three W's - you know, wine, women and willful smoking."

Tino admired the excellent manicure job on his fingernails for a moment, then looked up at me with his big St. Bernard eyes.
"One of these days I might find the time for it," he said pleasantly. "It could be kind of amusing."
"Time for what?" I said. "Another manicure you don't need?"
"To take you apart, copper," he smiled thinly. "See what kind of sawdust comes running out."
"You said that deliberately," I told him reproachfully. "Now you know I won't sleep nights."

She bent over her typewriter, pounding the keys like they were part of my face. I lit a cigarette and though profound thoughts about life - like a good woman is never hard to find - it's the bad ones who are so hard to get.[The Coolest!]
Posted by Jure P. at 11:35 PM