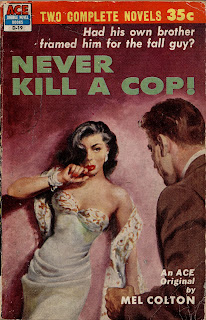 Like in the last two posts, the cop gets murdered to kick off the proceedings in this one too. But unlike those two - where the whole police department would get mobilized - here, nobody seems to be bothered with the killing.

Even though our main protagonist is a cop, this is far from the police procedural. It's more like one of those small-town setups with local (corrupted) cops, (corrupted) politics, organized crime and - needless to say - scheming dames with some psychology thrown into the pot. You know, the type that the guys like Jim Thompson and Gil Brewer perfected, and so when reading this, you can appreciate them even more and understand why they are such masters.

But don't get me wrong, this one is not bad at all. Just a bit chaotic. Starting with our hero Danny, a hot-tempered badass who gets in fistfights no less than three times in the opening four chapters alone. One of them happens like this:

He jutted his chin out. "Who are you, a cop?"
I blew smoke in his face. His eyes blinked momentarily. I ran a thumb along the side of my lower lip. I said: "You keep following me and I'll slap you flat on your ass."
He looked me over carefully. He said it before he meant to, I guess, because it was either rank foolishness or smart talk, because he muttered, "You're sure one tough bastard-"
He went flat on his ass.

So don't expect any witty verbal exchanges or cool one-liners in this one. It needs to be said that Danny doesn't appear to be very bright either. He keeps getting deeper and deeper into a hole because of his totally irrational behaviour. Indeed, in a small town where everybody knows everybody, you wouldn't flee a bar after some brawl in which you have knocked off a guy unconscious? Can you really be surprised to find yourself a suspect after shooting at cops? After discovering the body and, for some reason, neglecting to report it to the authorities? And after deciding to keep the gun found in the dead man's pocket.

Thankfully, after a while, he does get his shit together and manages to solve the case. Although, if I wanted, I could probably easily find a bunch of inconsistencies that don't exactly hold water. But there's no need to do so. It's a quick, entertaining read with many shortcomings that actually make it charming. I particularly liked the ending and found it cool that our hero decided to move to California and get some real education:

"Out West, in California," I interrupted, "they have schools for cops. They're teaching them to be trained, professional men in police work. I'm going out there to one. I want to be a trained cop, Phil. I don't want to have to use fists all my life to prove a point or get a confession."

Always a good thing to see people being aware of their shortcomings. Cops especially. And if I come across the sequel to this book, I'll be more than happy to pick it up and check on Danny's progress in California.

Hero:
Danny Harrington, a cop... for a while... until he's demoted... and then reinstated again

Dames:
There's his girlfriend Irene and his sister Lil, but the main femme fatal in this one is definitely Martha:

Martha was sex. Sex wrapped up in cellophane. In a glass case. Never, never touch.[Fatale]

And speaking of sex, like most everything else in this book, it's depicted in some crazy manner that one needs to decipher. And which makes it sort of amusing. Check this as an example:

Then she began to groan and whimper and there was the suspicion of great pain, for there was constriction and there was desperation. There was the pressure of defiance, and the acceptance finally, and with the warm mellow glow that followed.

I think I can guess what the "Mellow glow" would be. But Great pain? Desperation?

Location:
The fictitious town of Bishop, fifty miles away from Centerville (huh), "the gambling syndicate's base of operations"

Object of desire:
That, I think, is the biggest flaw because you have no idea what's driving this dude most of the time. Right after the opening killing, all he wants is to get laid. Either with Martha, his brother's wife (!) or with Irene, the girlfriend of his now ex-partner/friend (!!) who btw once saved his life. Then he gets this epiphany about "I've got to know the truth, one way or another", and finally is all about stepping out of the shadow of his younger, more successful brother.

And yet another example of this book being all over the place. But again, it's also something that makes it captivating. You simply can't tell what will follow in the next paragraph, let alone the next chapter.

References:
"Ever study Freud?" she asked quietly.
I shook my head. "Not much." I was watching the gun in her hand, and waiting for the tag line to come.
"This gun," she continued, "or any gun, is a male symbol."

Title:
Like in Never Kill a Cop, there's no comment needed. And they made the point in this one even stronger by adding an exclamation point to the end.

Cover:
Cool one by Bernard Barton. A bit ambiguous I think - Is she afraid of him or is she trying to seduce him? Maybe both?

Cool lines:
"I'd rather we talk about you," she replied.
"You're talking about trouble, kid," I said.
Martha turned quickly and faced me. Her lips were so damn close I could feel her breath. "Maybe I like trouble," she snapped.