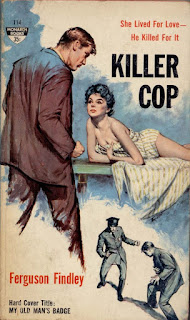 One of those that count on the reader to not pay much attention. You know the type - we read them during our morning commute while on autopilot mode, craving coffee and still half-asleep. Incapable or just too lazy to be bothered by the apparent story flaws and inconsistencies.

But in these strange covid-19 times, I have plenty of time, so I did pay attention, and here's how the plot thickens in this one:
Mind you, this is just the beginning. It gets crazier.

Before proceeding, it's worth mentioning that everyone drinks excessively in this one. Billie even eats her breakfast with whiskey! So you cannot help to think that maybe the author himself had a drinking problem and was unable to keep the coherent story going for more than a couple of chapters. Not saying he did, but such issues would certainly help explain the occasional switch from the first to the third narration. Or needlessly establishing a character that would be soon dropped without much explanation.

It seems like the editor (huh?) was losing patience too the more they neared the end. We are treated with some hilarious stuff. Our hero is chasing the bad guy and is frantically shouting at witnesses, "Where did he go?" while a big blood trail splattered on the floor is clearly pointing in the right direction.

Even Johnny is not immune to the fatigue as this goes on. At one point, when weighting his options and assessing the possibilities of progressing the investigation, he simply abandons the idea and instead takes a nap:

It was interesting to think about, but I went to sleep instead.

Brilliant! And it had the potential to be one of those great little silly books. But it just doesn't know when to stop. Instead of wrapping it up with some sort of a bang, it goes on and on and on. True, even more silliness will follow, but the whole thing is less and less amusing and more and more boring with every page you turn.

So I wouldn't recommend it for your commuting literature. You may fall asleep and miss your stop.

Hero:
Johnny, the cop, who "prowls the Greenwich Village streets"

If she was the Billie Bloomer who was expected, the bartender's observation of "everything's in the right place" was entirely correct. There was plenty of it, too, so much that Tony mentally asked himself, "True or false?" She dropped one of her gloves on the floor as she hung her coat in the almost empty check room. As she bent over to pick it up, he saw the answer was "true."

She's cool, but the Countess de Callene is even cooler. Too bad she appears in just one scene, and her character serves no purpose other than having sex with our hero:

"Do you think I'm pretty?" she wanted to know.
Well, she was. For all I could tell, she was a dope taker and a tramp and God knows what, but she looked darned good, sitting there in that room wearing nothing but a sheet, and I told her so.

Not really important, but it turns out she's not really of royal blood. And has a bit odd sense of humour:

"Were you born in Brooklyn?" I asked. "So was I."
"That makes us practically cousins, so we can't get married. All our children would be idiots, or Ptolemies, or born with two heads. I can't stand two-headed kids. Come over here and have another martini."

It wouldn't be fair not to mention his darling fiance, nurse Mary. A typical girl next door, not interesting at all. But, unlike Countess, she does have an important role. For some strange but convenient coincidence, one of the bad guys is wounded and ends up in the hospital where she works. You know - "of all the hospitals in NYC, she walks in mine",  And there's more. When realizing this guy is Johnny's suspect, she promptly injects the poor sucker with a truth serum!!


Body count:
It opens with a couple of corpses (see below), but this happens in the story that establishes our hero. Not linked directly to the main plot, so we can safely exclude them from the body count. In this prologue, we also witness the demise of Johnny's parents. We'll skip the mother, but his cop dad's death is pivotal to the story, so it counts.

Besides the old guy, there are four more violent deaths, so the grand total is 5.

Muddy's death is the best one by far. When Johnny finds him dying "with the purple-lipped hole in his chest, where a wide knife had been slipped between his ribs" he asks him "What's wrong?"

The object of desire:
Johhny wants to find his father's killer, but there's also a subplot that involves a shitload of heroin:

"We've got a nice little deal all arranged, Murphy. Couple of kilos of pure heroin, and I mean pure. It'll be worth a million dollars to us when we get it and cut it down."

By the way, cops have no problem with letting this deal go through to get closer to the cop killer!

I dove across the table and had my fingers at his throat when Cookie knocked me on the head with the butt of his gun and I went limp. He didn't knock me out, but I pretended to fade away. It gave me a chance to think what to do next.

References:
One of the bad guys has issues with Irish lads, so a cop provokes him by playing Molly Malone.

Cool Blurbs:
"She Lived For Love - He Killed For It"

Which sounds cool but has nothing to do whatsoever with the story. Shouldn't be surprised really... published by Monarch.

Title:
Also misleading. Our hero kills only in the first paragraph and in the last sentence.

Cover:
Pretty cool one. Even accurate in case it depicts the scene where Johnny and the Countess meet. Obviously, before the two-headed kids stuff happens...

Illustration not credited. Any ideas?

Smith & Wesson's Police-Model .38 is the smoothest-working revolver ever made, and yet I was having trouble breaking the cylinder to get rid of the five empties. It wasn't the gun's fault. It was mine. My hand was shaking as though I had been on the booze for three months, or as though I was a rookie cop who had just killed a couple of men.
Which I was.