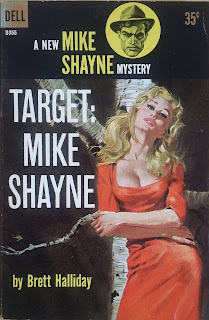 End of the hiatus, I'm back! Plenty of time to kill in these strange covid-19 times, and besides, I've been missing the quiet nights in the company of my good friends Arthur Guinness, Joe Camel, Tom Waits and such. So let's make social distancing fun again!

The good old gumshoe Michael Shayne is as good as anyone to help me restart this blog. I keep chasing these books on eBay because of their incredible McGinnis' covers and keep reading them even though they turn out to be pretty lame for the most part. Especially the latter additions to the series - when they were penned out by god knows which ghostwriter - vary a lot in quality. With 200+ pages, this one is pretty hefty, so I was a bit reluctant to pick it up. But as usual, I was eventually persuaded by the voluptuous blonde giving me looks from the bookshelf.

Glad I did and happy now to report that the book's length is more than justified because it covers two intertwining stories. They both revolve around an ex-con who's planning a heist while also dividing his attention to plot a murder of a particular private detective who had put him into the slammer.

The heist part is excellent. It's not the usual bank or armoured car job, but a high-stake private poker game on the top floor of some luxurious hotel which makes it a bit more elaborate, and the author puts a good effort in describing just enough details of our teams' preparation and execution. Which goes reasonably smoothly, and they actually manage to pull it off! During the heist, there's a cool detail that reminded me of Melville's Bob le Flambeur when Clayton (the inside man) gets on the roll with the dice and starts winning big time. Don't know; maybe our mysterious ghostwriter also saw the movie and got inspired. It was released only three years before this book was published.

The team of misfits makes it interesting: along with Clayton, there's a femme-fatale past her prime (both of them on their "last job") and a trigger-happy and a bit psychotic kid. A well-known template that has been used countless times before and since, and it works well here. The shifting alliances and relationships between the three are sometimes more compelling than the job itself. Good stuff indeed.
What ruins it for me is our main man himself. Shayne is Mike Hammer's distant cousin, and so excessive drinking and conservative macho persona do come along with the territory. And we've got used to this. Fine. But in this one, his "lone wolf against the system" attitude is driven to absurdly and even comical extremes. His dogged determination goes as crazy as beating the cops (twice!), and in the final showdown he literally uses his wheelchair as a weapon. It stopped being funny after 50 pages and became simply annoying for the remaining 150+.


But all in all, this one is an interesting addition to the series. Also, to be fair, it does have a cool identity swap twist at the end that I didn't see coming. And now, when this one is off the shelf, I can see another beauty smiling straight at me. So stay tuned. 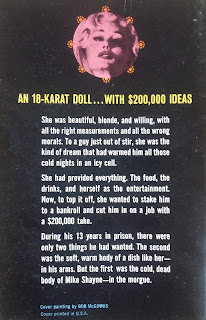 And then a tall, rangy figure came out of the hotel. His shoulders were wide and powerful, and he had the narrow hips and long legs of an athlete. His face was deeply lined. Even before she saw the red hair Miriam knew that this was Mike Shayne.


Dames:
Barring Shayne's faithful secretary and love interest Lucy, Miriam is the only woman in this one. I'm including the back cover scan, but that description doesn't do her justice. I found her to be a quite complex and likeable character.

Body count:
Only 2. Possibly another one as Clayton is badly injured, and doctors don't know if he will survive.

Blackouts:
None less than on three occasions. During the climax, he first gets shot point-blank in his side with a dummy bullet, but he's such a tough guy that it doesn't put him out yet. But the next bullet, this one to his head (and obviously dummy too), does the job and "The night closed down around him".


Once he's in the hospital and interrogated by the cops, he blacks out due to the exhaustion: "Shayne could feel the mists beginning to close in around him again."


Finally, after his semi-successful wheelchair attack, he loses consciousness because he's totally exhausted from the fight and preceding chase. This one is also pretty straightforward: "He felt a violent explosion behind his eyes."

Title:
Clayton holds a grudge against Shayne for putting him in prison thirteen years ago. Now he's out, and it's payback time.

Dedicated to:
"For Leah and Lee with Love"

Blame it on covid-19 psychosis, but I actually did some sleuthing myself to find out who the author is. From this very informative page on Shayne I got the list of ghostwriters and then checked their biographies for kids or spouses or friends Leah and Lee. Came up with nothing. So far...


Cover:
Another gorgeous and iconic illustration by Bob McGinnis. A fantastic job that must have substantially accelerated the sales (it definitely made me buy it). And am I right in thinking that it was actually used as a cover for one of those books on paperbacks publishing history?


Cool lines:
As he crouched on the floor, his forehead was on a level with her automatic. He started to bring up the tommy gun. She shot him between the eyes.[Fatale]
Posted by Jure P. at 10:49 PM