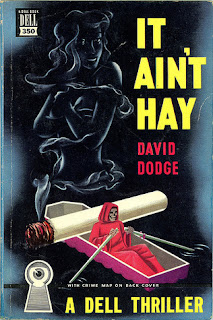 I had really hoped it wouldn't be one of those...

It starts okay-ish with that classical setup of a guy sitting in his office and secretary admitting a bit shady client. Unfortunately, our hero James Whitney is no hard-boiled P.I., and his secretary is no Velda. She is his "middle-age female watchdog" (his fucking words, not mine!), and he is an income-tax consultant. But what the hell,  let's not be prejudiced and judge people on despicable professions they do to pay the bills.

My eyebrows started to lift slightly as early as in the second chapter. After the hard day's work, Whitney takes his wife to the local restaurant for a quiet dinner over the candles. All good and romantic until the place is attacked by some raving lunatic. He gets subdued, and one of the patrons, who happens to be a psychiatrist, offers the explanation of what just happened:

"The way he walked in attracted my attention. As soon as he ordered the muscatel I suspected him, because drug addicts who drink at all like something sweet and bland. I knew it was marijuana when I looked at his eyes. Opium or morphine or another opiate would have contracted the pupils instead of expanding them."

So now we know where we stand. But Jimmy boy still doesn't, and so the next day, he visits his good friend detective lieutenant Webster and is promptly given a quick prison tour during which we meet an eighteen-year-old kid bashing his head on prison bars. You see, he had been so hoped-up on two reefers ("one might have been enough") the night before that he smashed the heads of his pa, ma and fourteen-year-old sister with a baseball bat!

Not surprisingly, it turns out that the shady guy from the book's opening chapter is some prominent mobster (he looks like the French ambassador) who needs James to do his money laundering. It never gets explained why such a badass would pick up his tax consultant randomly from the yellow pages. Keep in mind that this is taking place 15 years after Al Capone's imprisonment for tax evasion, and one would think that by this time, the Syndicate would have established some team of legal experts on tax matters. Or something...

But this is just a minor inconsistency compared to some forthcoming hard-to-swallow shit. Webster soon joins forces with James (mind you, not the other way around!), but for some reason, it doesn't occur to either of them that the easiest way to bring this guy down would be for James to simply take the offered job. Surely it would be a piece of cake to expose somebody's tax wrongdoings when you have all the access to the accounting books. This becomes especially unusual in the light of later developments when none of them has a problem with sending a grieved widow off to be bait when capturing some crazed (needless to say - hoped-up) maniac whose rap sheet includes rape among other felonies. Was there no policewoman available in the entire SFPD willing to go undercover?

Not to mention the whole elaborate sub-plot about smuggling the hay from Mexico. It makes a little sense because just before revealing this master plan, we learn that the weed can be (and actually is) planted all over the USA. After all, it is super resistant. Is it possible that even back in the 40s, South Americans were scapegoats for the American drug problem?

Whatever. No need to go into that. What is worth exploring a bit is how our team of experts uncovers the connection between marijuana and Mexico. It is very straightforward - our mobster owns a tuna fishing boat, and apparently, commercial tuna finishing is carried off the coast of Mexico. And that's basically it, I kid you fucking not! All I can add is that at least the publisher was honest enough to call this "A Dell Thriller" and not "A Dell Mystery".

But then again, calling it a thriller would be a bit of an exaggeration. There are pages and pages of needless padding. Towards the end - when things should really be speeding up - there's an almost dialogue-less chapter that is entirely dedicated to establishing some minor henchman's badass character. Not sure what the point is because the guy gets killed shortly after anyway. Was the author chasing some word count? Hard to believe since the book is 200 pages long. Did he go overboard with the research and was simply a bit stoned?

I wanted to like it, but this one is all over the place. Nothing really works. But still, let's finish on a positive, educational note. If you have ever wondered why musicians do drugs, this may help you understand:


"Look at some of these musicians that use it. It excites them, makes them high and hot, so they can beat the music out faster, get in the extra licks they couldn't handle otherwise. They are in the groove, and the groove is boogie-woogie - for them. For somebody else, the grove is rape or murder or arson."

And for all of you out there who are considering switching back from consuming hard opiates to just smoking pot, this may be useful to know:

"Opium doesn't give you trouble?"
"Don't get me wrong. Opium is plenty bad for anybody that uses it. I meant that hop smokers want to get off in a corner and go to sleep, not hell around looking for trouble. A hay head has to be near other people; he's excited, steamed up, talkative, full of vinegar. He's like a stick of dynamite in a fire. Maybe he'll burn with a nice hot flame, maybe he'll blow up in your face. You just can't tell."

So now you know. 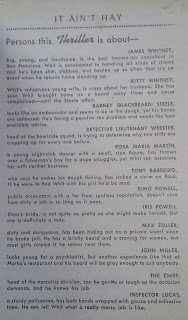 Hero:
James Whitney may be "big, strong and handsome", but at the same time, he's also a dull, conservative, vain, and ego-centric asshole.

The bad guy(s):
That would be Barney, Tony and Max from the list of characters. Tony is a bit of a psycho, so there was some possibility of at least minor character development. But of course, it never happened.


Dames:
No strong women characters either. Kitty (as voluptuous and luscious as she is) is introduced at the beginning, and she only re-appears briefly at the end with the sole purpose of wrapping it up with a proper, family-friendly kind of ending. Iris and Rosa are more interesting, but both are totally underused. Rosa especially gets some pretty shitty treatment:

The story does take a somewhat cool detour in chapter 13 (titled "better than a drink"), in which James gets drunk and stoned (on a single reefer, mind you) and actually scores with Rosa. That's the cool part. But instead of keeping her around and actually involving her in the case, this pathetic tax consultant gets such a guilty conscience that he goes to see a shrink (chapter "undressing the inner man")! What follows next is more nonsense about drug addiction and related childish psychology. And poor Rosa is more or less out of the picture. Shame, I liked her.


Body count:
Discounting all the nonsense in various cautionary tales about hoped-up kids killing their family members with baseball bats and such, all that remains at the end is just a single proper corpse.

The object of desire:
Of all the flaws mentioned, I think this is the book's biggest one. What drives our hero for 200 pages is nothing but vanity. He simply cannot get over the fact that he was beaten by some hoodlums.

This guy is so upset that for five weeks can't be bothered to pick up the phone and give a ring to his wife after she has left him with the "chasing gangsters or keeping me" choice.

And there's more to this obsession. He makes a deal with (not just one but two) cops that they would give him 15 minutes alone with the main bad guy before they arrest him. Huh, seriously? Come on!

Blackouts:
Two of them. First time when he's beaten and then again after he manages to drag himself home.

References:
Eddie Schwartz, the "nighthawk elevator man" is reading some story titled "Rape on the Range" in "Spicy Western Stories" magazine. And it didn't sound too bad either. I tried to find it online, but it turned out that both the story and the magazine are fictitious. But googling it, I found this cool gallery of spicy westerns scans.

And during the aforementioned shrink session, there's a reference to none other than Othello:

"Let me read you one more clinical report. This is Cassio, who got drunk as a pig and made a fool of himself. Hes says: Oh God, that men should put an enemy in their mouths to steal away their brains! that we should, with joy, pleasance, revel and applause, transform ourselves into beasts!"
John closed the book with a snap.
"'Transform ourselves,' Whit. Remember it."
"Great little guy, Casio," Whit said. "I know just how he felt. Be sure to send me a bill."

Title:
Indeed, by now, no additional explanation is needed.

Dedicated to:
This book is dedicated to my good friend Joe O'Ferrall

Chief of the Division of Narcotic Enforcement, Department of Justice, State of California, and to the men who work with him.

Cover:
Stunning illustration by Gerald Gregg. And despite all the above bitching and ranting, I'm keeping this book in my collection until the day I die.

Cool lines:
Nothing really cool, but every now and then, you come across some bizarre, WTF stuff like this:

I'll bet a dollar that place is harder to get into without an appointment than an abortionist's operating room.
Posted by Jure P. at 10:21 AM