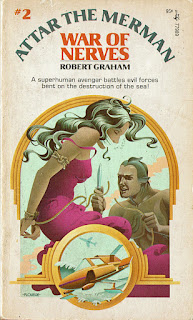 This one doesn't waste any time with preliminaries. In the opening chapter's mere five pages we learn everything we need to know about the plot. If you're interested and have 15 seconds to spare, you can read its (even) more condensed version from the scanned back cover below. The only really curious detail that gets left out is the name of the poison that villains plan to use. Here it goes:

Anyway, the second chapter is a mandatory hero introductory chapter. Not much to write about - he's a pretty ordinary men's adventure novels hero, with his unique feature being medically inserted gills that (obviously) enable him to breathe underwater. Not much gadgetry is involved either, with maybe a notable exception of "...incorporated into Attar's ankle sheath was a small radio transmitter, powered by an electrochemical reaction with sea water..."

What makes our hero memorable are his sidekicks introduced in the third chapter. This is definitely the novel's highlight, and it requires multiple readings!

Sam, the dolphin, is only briefly introduced and then later, for some unknown reasons, dropped and replaced with Attar's brother Victor. So let's not waste too much space on him and just see how this friendship was formed:

The Attar's other sidekick, the killer whale Grampus, is the real star here. The whole introductory stuff is simply hilarious and I could easily retype the entire chapter, but these posts are running too long lately, so let's just single out a few paragraphs. The insanity starts with:

Huh? You see, dolphins thought that raising the orphaned orca would be a "grand practical joke"! True, a "pretty dangerous game", but you see,  "dolphins live with danger the way humans live with weather - they don't let it bother them too much". But still, this experiment leaves him a bit mixed up:

Great stuff! And I honestly thought I was onto something special here. But then this silliness stops, and with every page the whole thing grows duller to a point when it's almost unreadable. I can see why the series ran for only two entries, and I'm not really interested in finding the first one unless I come across it in some used bookstore for a couple of bucks. But I'll be prepared for that one and will probably stop reading it after the intro.

Location:
Attar is Australian, and this is where the introductory chapters are staged, but then he and his brother Victor leave for Florida and later finally end up in Haiti.


Body count:
6 (the first one is pretty funny - "You can't sneak up on a telepathic animal!")  + 9 (some pretty gory) in the final shoot-out + a suicide in the epilogue make a grand total of 16.

References:
The voodoo prayer in Chapter 11 is taken from the book "Haiti: Black Peasants and Their Religion" by Alfred Metraux.

Blackouts:
I think he almost faints when he gets trapped underwater. But not for lack of oxygen, of course; it's the coldness of the ocean that gets him.

Cool lines:
While Attar was trying to frame a sufficiently sarcastic reply, Victor snarled a suggestion to the youth that was both biologicaly improbable and illegal under Florida's sodomy statutes.[The Coolest!]
Posted by Jure P. at 2:23 PM