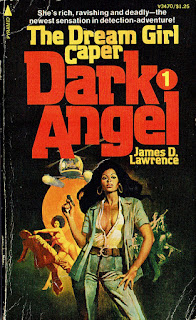 As a devoted fan of the Glorious Trash, I've been well aware of the infamous Dark Angel. One of the two reviewed books there even made it into the Joe's Hall of Fame, which is the best recommendation I could possibly get. Unfortunately, these paperbacks seem to be pretty scarce, and when they appear on eBay, they are ridiculously overpriced. But I have been selling some stuff on eBay myself lately and was really lucky to accumulate a decent PayPal fund at about the same time when a lot of three  Dark Angels was offered for 30 pounds. Didn't hesitate much and couldn't wait for them to arrive.

Turned out that The Dream Girl Caper was a bit of a letdown. Instead of the hard-core violent blaxploitation stuff that I had expected, I got a pretty tame mix of mystery/action caper story with a few juicy sex bits thrown in.

The setup is okay. Some senior ad executive's trophy wife and her mafia hitman stud are scheming to hijack the grand prize of some T.V. treasure hunt that her clueless hubby has conceived. Their plan is hardly very elaborate (she fucks his boss, they plant a murder on him and then blackmail the schmuck), but there are some other characters involved, the seedy P.I. and the quack psychiatrist/pimp with his secretary, that make this mystery enjoyable. Our Angie doesn't exactly sweat a lot on this case since every clue (and intuition) turns into a successful lead, so she basically just goes from point A to B. Not a problem, really. She's cool, and halfway through the plot still has many possible developments. Or so I thought.

Mr Lawrence decided to go the other route. Instead of wrapping it up, he prolonged it to 200+ pages by bringing in not one but two organised crime families. And thus turned this decent crime novel into some sort of an action extravaganza with helicopters and boats rushing to the remote island where the treasure is buried and where the shootout between mobsters ends in a big ass explosion. Because you see, this island was until recently owned by the Pentagon, and military guys forgot to remove some missiles that were stored there. As they usually do...

Now don't get me wrong - I have nothing whatsoever against the insane action sequences and noncoherent plots. They are usually fun, but here everything becomes a bit boring. The thing is that Angie is the character that drives the story. She's genuinely cool and funny, so I cannot understand the author's decision to dedicate so much of the narration to Garth, especially in the second part. It kills the pace and puts out all the amusing sparks she is tossing around. And besides, do we really care about some advertising agency executive in his mid-life crisis!?

To make things worse, Angie and him become lovers! They start calling each other "darling", cook dinner before having sex and listen to Mozart after having sex... Toward the end, we even have to endure crap like this:

And not surprisingly, she is the one who brings a bit of humour in this far-fetched affair. Check out this transcript of her call to his office after their first night together:

Is having its protagonist say "dig" occasionally and being referred to as "mama" every now and then really enough for a book to be labelled as blaxploatiative? I'm not an expert and will let you decide about it, but it did seem a bit odd that our hero was the only black character in this one. Although having said that, I must admit that there are a few hilarious bits related to our heroine being black. Just loved stuff like this:

Anyway, this racial angle is just an observation. It's pretty much irrelevant. Let's finally talk about sex!

And this one is really fucking weird. It seemed like it was written by someone who had never had sex but had read about it a lot (too much?) in Spillane novels. In Angie's introduction, we learn that she was savagely beaten and gang-banged as a teenager. Still, the experience wasn't all that traumatic because she had already been sexually abused at six and again at nine by two of her mother's boyfriends...

One would assume that such an ordeal would leave our poor Dark Angel traumatised for (at least one) life, but one couldn't be more wrong. Only a couple of pages later, there is a hilarious scene in which a guy gives her head while she interrogates him (sort of), and several chapters further, she gets fingered while being hypnotised by an ornament shaped like a pair of testicles!

I do realise it sounds stupid, but it is funny, trust me. Until it switches back to vulgar mode several pages later:

So when it finally comes to "proper" sex, it goes as cheesy as this:

I don't know, I probably put too much emphasis on this whole sex angle, but still, some of that shit was hard to digest. 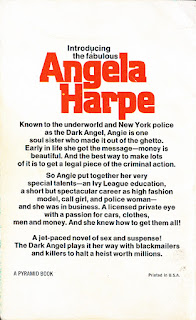 Dr Baxt's receptionist Fogel is much more interesting - "two hundred pounds of solid bone, tit and muscle". She's repeatedly - and to the point of a real annoyance - referred to as a dyke. Won't go into political correctness bullshit, but it is unnecessary and comes across as simply mean. Not to mention stupid.

The object of desire:
The novel's central problem is that the primary plot vehicle is totally unrealistic. The thing is that everyone's chasing that T.V. treasure hunt's main prize because, for some unexplained reason, it is delivered in cash!? Yes, three million dollars in cash!?! Why the hell couldn't the producers simply hand out a check to the winner?

The painting portrayed a nude woman in black silk stockings and pink garters, painted in oils in the self-consciously "naughty" style of Felicien Rops, the Belgian pornographic illustrator of the Gay Nineties.

Cover:
Pretty cool collage of some scenes with our heroine in front. It even depicts one of the two fights where she's in the nude!

And let's finish with sex, what else? Here's a bit weird, very Coxman-like monologue of the creepy doctor which he uses for hypnotising our heroine:

Sex... sex is the answer to all human problems," he intoned. "The true religion of the messiah, resolving all human conflicts... the perfect dialectical synthesis, eliminating forever the dichotomy between male and female... melding them into a single harmonious human entity...
Posted by Jure P. at 11:19 PM