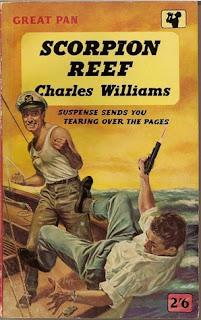 I read Williams' debut novel Hill Girl a while ago and really liked it. Wish now I would have blogged about that one instead of Scorpion Reef because the old maestro certainly deserves a more positive introductory post on this blog. But it is the end of the month, and I need to fill a self-imposed minimal monthly posts quota of at least one entry:)

Three-part structure with a somehow formulaic beginning in which our hero gets sucked into an intrigue that involves a beautiful blonde, her husband, shitload of money, smuggled diamonds and a gang of ruthless gangsters. So nothing really original, but still I liked it a lot. It's written with great skill in a very realistic style and with some excellent characterisations (the main bad guy is pretty fucking menacing!). A true page-turner, even though it had to be said that the plot is a bit simplistic and probably takes too long to get going.

This first half serves to set a stage for the main part. Our hero and freshly widowed Shannon (btw, by now, she has become the love of his life) are sailing on a small boat accompanied by a couple of mean gangsters on some sort of a treasure hunt. Confined space, the heat of the sun, handful of co-dependent individuals linked by love/hate/fear/greed/mistrust/etc., and with a clock relentlessly ticking,... should be a winning formula for a superb psychological thriller...

Unfortunately, it doesn't happen this way, and it goes rapidly downhill instead. There's too much emphasis on our damned lovers while the action is almost totally neglected. Psychological parts are naive at best and sometimes even laughable. There's a scene in which the bad guy handles a loaded gun to our hero knowing that he hasn't got the guts to use it...

But as much as this middle part is a letdown after the promising opening, the worst is yet to come. I would dare guess that Mr Williams wanted to wrap up the novel with a surprising twist, so in the several following chapters we need to endure some ultra corny romance that serves as a basis for that unexpected ending. But too little too late for my liking. After 190 pages, I was just happy to finally get over the line.

But I'm not giving up on Williams. I think my next one will be Dead Calm. Saw the movie with Nicole Kidman and Sam Neill ages ago, and as far as I can remember, it has a similar setup to this one. Or maybe I should go with "Talk of the Town" or "Hell Hath no Fury"? Surely books with such cool covers cannot be bad? :)

Location:
First half in some fictitious coastal town called Sanport, the rest on the big blue open sea.


Body count: 4
And Bill is pretty philosophical about the demise of the hoodlums:  They lived by violence. They had died the same way. It was just an industrial accident.

The object of desire:
"What's in the plane?" I asked.
"Diamonds," Barclay answered. "You might say a considerable amount of diamonds."
"Whose?"
"Ours, obviously."

Dames:
The very first encounter between Bill and Shannon is pretty cool:

I was checking over some diving gear on the forward deck when a car rolled out of the end of the shed and stopped beside mine. It was a couple of tons of shining Cadillac, and there was a girl in it.
Or maybe a better way of putting it would be to say a girl came out of the shed, wearing a Cadillac. You'd see her first.

And I'll spare you of all the superlatives in that corny last act...

Blackouts:
When they turned me loose at last and went away my knees folded and I fell forward on my face. Wind roared in my throat, and my mouth was full of sand.

Title:
Scorpion Reef is where our party of four is headed to salvage diamonds from the sunken plane. But I think it has more of a symbolic meaning of something inescapable (you know: scorpion... death...). Anyway, pretty cool title and definitely better as "Gulf Coast Girl", under which it was republished a year later by Dell.

Cover:
Typical British cover. We get a pretty generic fight scene instead of some sexy illustration of Russian-Finish-Irish tall blonde Shannon in a swimsuit. And look at the facial expression of the guy standing. Hillarious!

Cool lines:
"Well, I wanted to see everything before I died, and now I have. A man over thirty who still believes women.""
Posted by Jure P. at 11:06 PM