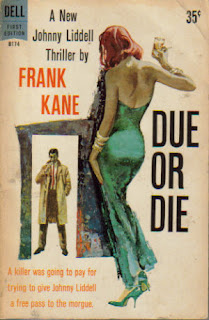 I like the concept of a P.I. being hired by mobsters. It isn't terribly original, but it's still unusual enough to function when done decently. It does work in this one, maybe because there's a cute twist. A group of ageing has-been tough guys hires our hero because somebody is trying to sell them protection! Yep - some "shake artist" threatens to wipe them out one by one unless they come up with a neat little sum of a million bucks!

It's too bad that the story doesn't evolve much beyond this premise. Only a couple of new characters are introduced outside this closed group of six people, so it gets clear pretty soon that the culprit will be one old fart double-crossing his mates. Liddell's M.O. doesn't help this non-development either. Our main guy basically stirs shit up by doing nothing more than simply hanging around and making bad guys nervous. You know, so they would make a mistake...

There's a body in the morgue that the local sheriff wants to dispose of by cremating it ASAP to destroy the evidence that would prove this guy was shot and hadn't committed suicide. The contrary proof is the angle of the bullet's entry point into a wound, so Liddell and his side-kick Tommy Thompson at first even contemplate stealing the fucking corpse!?! Luckily for them, Johhny does get the Eureka "Pictures!" moment (but doesn't share it with Tommy), so he spends 10 minutes setting up the shot and then another 10 minutes searching for the camera. After failing to find one (in a morgue!?!), he admits defeat and finally explains the whole setup to Tommy. And good thing he does so because it turns out that Tommy owns a Polaroid and needs just 15 minutes to fetch it from his home. So, here's a lesson for all you private investigators out there: do some brainstorming with your assistants and share the ideas!

The other example involves a bomb! Johnny is chosen to deliver the payoff money, but the "shake artist" replaces the money in the bag with the bomb before handing it to our delivery boy. This whole bomb business is entirely unknown to us, but Johnny has a hunch. Even more - he's pretty sure when the thing will go off, so he vehemently drives around with this bag in his trunk before burying it into the ground. Lesson #2: if you have a hunch there's a ticking bomb in your car's trunk, pull the fuck over and check it out. Otherwise, you're a dumb-ass and not bad-ass!

Cool, entertaining stuff. I just wish it didn't have to end with one of those silly but almost mandatory suspects roundups...

Hero:
Johnny Liddell, P.I. - action man, fast on the trigger and relatively (10 minutes) fast on thinking. But, to be honest, he could definitely be fed a few witty lines. Especially his verbal exchanges with women are ultra corny.  Check this:

"I hope you know what you're doing."
Liddell smiled grimly. "I hope you get your hope."

"I liked your act," Liddell told her.
She looked him over with frank interest. "You should see what I do for an encore."
"That an invitation?"
The blonde shrugged. "Why don't you try taking me up on it?"
"Maybe I will. But if I did, I couldn't just go asking for the chocolate dish with the white frosting."

The bad guy(s):
Las Palmas sheriff:
"Under him, law enforcement was satisfyingly broadminded"

...and his two henchmen:
Behind him, he could hear the sheriff expressing a highly censorable, and at best debatable, opinion of his two men, their personal habits, their legitimacy, and the possible canine element in their immediate families.

Location:
It starts briefly in Johnny's New York but then moves to the fictitious town called Las Palmas where "the only unforgivable crime was to be broke".

"What'll they do to him?"
Liddell shrugged. "Take back their money. Then they'll turn him loose and let him run." The elevator whooshed to a stop, the doors opened. "The syndicate will put a pencil mark around his name and he'll be a fair hit any place in the world. He won't live much longer this way, but it'll seem a lot longer. In the end, he couldn't be deader."

The object of desire:
Preservation of their lives (and a million bucks) for mobsters and clearing his name for Johnny.

Dames:
The voice on the other end was the husky kind that does things to the spine. "This is Lee Loomis. I don't know if you know me-"
"The Lee Loomis?"
There was a pleased sound from the other end of the phone. "A Lee Loomis. I hope it's the one you mean."
"You headlined the show at the Cuernavaca a couple of months ago? That Lee Loomis?"
"How nice of you to remember."
"How could I forget?"

There are two other gun molls, but (unfortunately) they don't get much exposure.

Blackouts:
He briefly loses consciousness during the interrogation of the two sheriff's bulls but kicks the shit out of them when he comes back to his senses.

Title:
It's cool sounding, but it hasn't got much to do with the story. At least, I didn't think that anything was so due that someone would have to die.

Edition:
Dell, First Edition, March 1961. It is numbered 8174, but when I google it, I get back A. Betram Chandler's "Spartan Planet". Strange... I don't own some special collector's item paperback with the printing error, do I?

Cover:
She was tall. Her red hair was piled on top of her head and a green silk gown did its best to cover her lush figure. Her lips were full, moist soft; her eyes green and slightly slanted.

And again towards the end:

She was wearing the same nile-green dressing gown she had on when he first came to the bungalow. It was still doing the same wonderful job of showcasing her figure.

Cool lines:
Liddell turned to face the man who was leaning against the back of the cage. His eyes were tired, his suit wrinkled, but the right hand sunk in the pocket of his jacket gave him authority...
"Who are you?"
"The welcoming committee," the tired-eyed man drawled. He nodded to the gun. "Take it out with your left hand. Two fingers."
...
"Heavy piece."
"Makes my coat hang hang straight."

And a couple of threats. I'm not sure that I get the first one:

"Okay, buddy. One move out of you and this is Cinderella's coach, only midnight's never coming."

The next one I do get, but it's still a bit silly:

"Move one finger while I'm driving and I'll put a hole in you big enough to drive a Mack truck through."
Posted by Jure P. at 10:57 PM