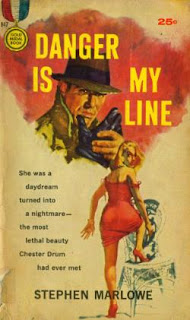 I read Drum Beat - Madrid recently and quite liked it. Nice mix of a private eye mystery and spy thriller with a decent story (there are actually two of them) and a bit of a globetrotting plus some sex thrown in. This one follows such a template but is far inferior.

The opening part, let's call it the "P.I." section, that takes place in Washington is okay and, although pretty short, it sets up things nicely. A guy found not guilty of murder confesses the crime and sells his story to some newspaper publisher. There's also a beautiful blonde, and we don't need to wait long for the first corpse to appear. It didn't exactly grab me by the throat, but it wasn't bad.

But then it just goes from pretty good to somewhat decent to kind of okay-ish to... a bit boring, and towards the end, it's just a struggle to get over the line.

The story is too fragmented, and numerous action scenes are too static. The damn thing hardly moves anywhere, and it is usually in the wrong direction when it does. And you know that the writer wasn't very confident (dare I say skillful?) when in the middle of the novel you come across a two-page recap that reminds the readers what the hell they've been reading so far.

In short - disappointment. Stephen Marlowe and his Chester Drum post were long overdue on this blog, but I wish it would be for some other book. This one is memorable only for one of the most idiotic takes on the cold war (see 'Object of Desire' section of the facts below) and maybe also for some pretty ridiculous LSD trips descriptions.

Body count:
9 + Wally's dog Benards. Interestingly, the main villain survives in this one and only gets away with a broken arm.

And when both Freyas finally have sex with Drum, the whole thing is described pretty - oh well - octogenarian-ish:

Nice one indeed, although I'm not 100% sure whether it refers to the Baroness or to Freya.

The peculiar thing about this one is that afterwards, Drum still manages to walk for three hours before collapsing. But let us not question this too much since even "Dr. Ericksson says it sometimes happens like that, even with severe concussion."

Anyway, he loses his consciousnesses twice more, but neither one is especially memorable:
Dark sky split and spun sickeningly a hundred and eighty degrees until it was beneath my feet, and I plunged in,

I think it's fair to say that it is one of the coolest. Except for, of course, "Killers Are My Meat"!

Cool lines:
With her left hand she shut the door and leaned on it. That made her right-handed, because in her right hand, and pointing it where such things will be pointed, she held a small, snub-barreled revolver, a belly-gun.
The phone went on ringing. the shower went on hissing and drumming. I went on living - for a while.
Posted by Jure P. at 9:28 PM