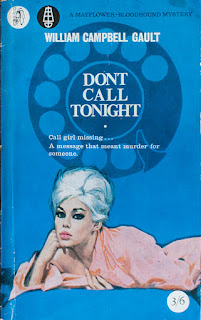 Had a pretty shitty streak of book choices lately, ranging from an ultra boring and annoying Perry Mason to a couple of old British spy thrillers, so I just wanted to get back on track with some classic PI stuff. Had read Gault's Million Dollar Tramp not long ago, so I knew what to expect with this one.

And I did get the classical detective stuff that I'd wanted. But unfortunately, except for my favourite type of opening (PI hired by a damsel in distress in his shabby office), there's nothing really positive to report about this one.

I think the biggest problem is our protagonist. He's simply not very imaginative and totally lacks initiative. At times he gets so lost that instead of doing proper gumshoeing, he reads western paperbacks (btw - approved) or goes playing golf (not fucking cool). He simply goes out on a stakeout on one occasion because "I had nothing else to do"?!? And even though he works with the police, he gets most of the information from newspapers and radio.

It gets worse. Or maybe better since it's a bit comical. When he finally gets a hold of the suspect who might be able to give him some useful clues, our man Joe fucks up the interrogation and subsequently gets so frustrated that he beats this poor schmuck so hard that the guy ends up in a hospital. Not exactly Marlowe-esque, right? So, due to his inefficient techniques, it takes him 150+ pages to get a vital clue. He goes for lunch and accidentally runs into one of his fellow sleuthing colleagues who investigated one of Joe's current suspects in a totally unrelated case. During the chat, he then opens Joe's eyes with information that both he and the police have somehow managed to overlook. Eureka! And again - not exactly Marlowe-esque...

A bit amateurish but still bearable and, in a way, amusing. But coupled with a corny romance involving one of his suspects and topped with some lame self-pitying midlife crisis philosophy, it proved to be too much for me.

Not good, not bad, just another formulaic novel. I think I'm probably a bit pissed off and mean towards Joe because of the climax. You see, the twist has got to do something about homosexuality. I'm certainly no prude, don't care much about the political correctness and try not to judge old books from the modern perspective, but at the same time, reading about the queers, degenerates, half-people,... did leave a bit of a bad taste in my mouth. I mean, for fuck's sake - half people!?

Okay, if you were reading Perry Mason before this one, but otherwise... 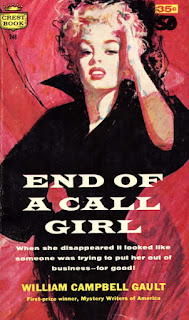 Dames:
Jean Talsman, the call girl. Her madame Mrs Dora Diggert. Her flatmate (and Joe's playmate) Mary Cefalu, the model. Mrs Rafferty, the red-headed secretary with a shady past.

Blackouts:
Redness flooded my brain, but I was still conscious as I went down, conscious and powerless. As soon as I went prone, they began to kick me.
The last thing I heard, before a shoe caught my chin and brought oblivion, was the voice of the man whose throat I had held.
"God-damned snooping shamus," he was muttering.

Title:
Have no idea where this "calling tonight" business came from. I'm pretty sure there was no fatal phone call in this one. The original American title "End of a Call Girl" is a bit more appropriate and accurate. The call girl in question survives this one, but she's now engaged to be married, so I guess that would make the end of her as a call girl.