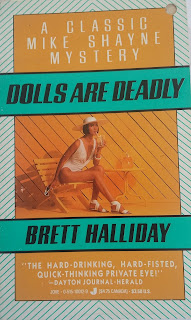 Pretty cool opening. Shayne is in his office nursing a glass of his Hennessy cognac, working on the dilemma of putting out his cigarette. He opts for the hardest of the three available choices by swinging his long legs to the floor and thumbing it out in an ashtray. And then the trouble comes knocking on his office door. Only this time, the trouble isn't shaped as some beautiful damsel in distress. The distressed one is a muscle-man of the local loan shark, and there are two reasons for his disturbed mental state. Someone has sent him a couple of voodoo dolls!

After mere five pages (of pretty large print), our shamus throws the big man out and reminds his secretary (who stopped typing and looked up reproachfully):

"I draw the line, Lucy, at keeping a professional murderer from being murdered. I know the law doesn't, but I have a code of ethics which I don't think it would hurt the law to embrace."

And then off he goes fishing with his Cuban friend Sylvester!

Pretty funny, I liked it. But in the very next chapter, things start to go downhill a bit. His little Cuban captain is being exploited by three shady characters, and it doesn't take long before he ends up under his ship tied to an anchor. Which is not that good. I mean, obviously, it's pretty fucking bad for Sylvester but what bothered me was that personal crap got involved, and I don't like that in P.I. stories. However, on a positive note, at least it's not family crap which is the worst kind of personal crap.

But I'm digressing. So, we have two unrelated cases that our sleuth needs to solve. Not much of a spoiler to reveal that it turns out they are not unrelated. Nothing unusual, of course, about that. It follows well established and proven formula, and we read such stuff all the time. What is worth mentioning is that these two affairs are linked with a sheer coincidence. Protagonists of both sub-plots simply attend to Madame Swoboda's mystic seances.


Unlike coincidences combined with a personal/family shit is usually a recipe for disaster (sometimes for laughter), but it still works in this one. The story is quite complex, and it culminates with a cool twist in an almost Ross Macdonald-ish type of tragedy.

I also liked the style. This is one of the first Shayne novels that were ghostwritten (according to this website by Walter Ryerson Johnson). It seems that the author tried to capture the original style of the 1940s and, in my opinion, pulled it off more than well (check out the 'dames' and 'cool lines' of the facts below). But at the same time, it has to be said that it also feels like it was penned out pretty quickly without much reviewing and/or rewriting. Some scenes simply don't make much sense and are probably some leftover ideas that the author forgot to drop when trying to reach his word count before the deadline. Why would Shayne take his secretary to an interview with his client and then leave her waiting in his car?

Charming. The coolest Shayne I can remember of. 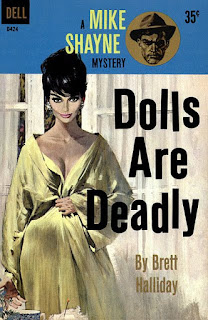 Hero:
"Michael Shayne?" Ed repeated quickly. He looked at Shayne, as did Slim and Vince, from the wheelhouse. "You mean," Ed said with unsteadiness in his voice, "you're Michael Shayne, the private detective?"
"The same," Sylvester said proudly. "My friend, he is famous everywhere."
"Well, I'm damned!" Ed smoothed his angel's halo of graying hair. "Miami's best-known detective on our boat. Wait'll I tell the folks back home."

Bad guys:
It was rumored that he had known Lucky Luciano before Luciano was deported to Italy, and had since visited with the dope and vice czar there. However, as yet no crimes of consequence had been hung on De Luca by local or federal lawmen, for he was cunning and capable as well as ruthless.

Dames:
There's Clarissa Milford with a smooth golden head... tall, but her bones were light... she gave the impression of delicate fragility... she seemed to be one of those rare feminine creatures without imperfection.

But the real star is the mystic Madame Swoboda. Check out her anatomical details:
...ample and worldly breasts, extraordinary long lashes, slim fingers, aquiline nose. Her features were regular, her skin clear and fair, her face beautiful and tantalizing.

Title:
Someone is sending around voodoo dolls, and some recipients end up dead.

Cover:
A horribly generic photo, so I'm also including the original McGinnis illustration. Far from his best, but still million light-years ahead of this.

Cool lines:
In any case, since murder unaccountably was breathing down the necks of some people, a talk with Sylvester was strongly indicated.
Posted by Jure P. at 11:01 PM