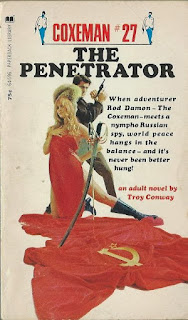 Who's Afraid of The Big Bad Russian Wolf?
Certainly not Rod Damon!

Unlike my first two Coxmans, this one doesn't start in his cabinet at Wisconsin college with our stud "studying" the species of the opposite sex and being interrupted by his superior. Instead, the entire opening chapter is dedicated to introducing his soon-to-be adversary Countess Marie Antoinetta Rubinov. You can read more about her in the facts below, but for now - just to keep your interest - let me add that she has had over seventeen thousand men and was "mounted" by a heat-crazed horse on her tenth birthday! Yes - welcome to the crazy and sexed world of Troy Conway!

It's pretty unclear, and as funny as it is, it doesn't really push the plot anywhere. So Mr Avallone switches over to a proven formula. In the second chapter, we do find Rod in his Wisconsin University cabinet, working on one of his sex theories with the assistance of his student Sarena. And being interrupted by Walrus-Moustache - Party-pooper, Killjoy, Bad News and Joe Btsplk Number One.

Rod's briefing is more conventional, and his assignment also includes the mysterious Penetrator, but there's another problem he must deal with. He needs to find out as much as possible about the "cobalt special - a granddaddy of all bombs".

So Rod is off to Moscow, and this is where the plot basically ends before it has even really begun. For the following hundred pages or so, there's nothing but fucking. And it's cool, but it does get repetitive. There are several attempts to revive the story (dead spy, assassination attempt), however, they don't amount to much, so Mr Avallone just wraps the whole thing up with a couple of surprising twists (for lack of better expression) and a little reminder that this is not a spy story anyway.

And also tells us in his unique way to go fuck ourselves in case we expected one:

Spying just isn't all that it's cracked up to be.
But sex is.
And it's the only crack in the world that I, Rod Damon, will ever be interested in.
Local Russian spy rings, please copy!
And why you're at, go screw yourselves.
Da, da!

Hero:
You see, I'm kind of the male Rubinov of the West when you get right down to it. A pure born satyr, first class. Only thing is I'm not sick about it. It's no hang-up.
More a hang-down, you could say. Ahem.

Bad guys:
"And who is the General?"
Him I hadn't heard of. Aside from Motors, Electric, etcetera.
Walrus-Moustache smiled at me almost fondly.
"I hope you never meet him, Damon. Few people that we know have. And lived to tell the tale. A man of mystery. A physical giant of over six feet six. Handsome as a statue, older than time itself. He drove a tank in World War I and led armies in World War II. And now he is the head of anything Russian that requires violence, liquidation and aggressive action. He is their executioner, as it were.

Driving tanks and leading the armies, but only a few people have seen him?

Location:
"Go ahead. Hit me with it. Tibet? Nope, Alaska? The moon-"
"No, Damon. Russia."
I opened my eyes and in spite of myself, I felt a quickening of interest. You see, lately I've been on a Russian kick. Culturally, I'm kind of stuck on Redland. What with the Moiseyev Ballet, their opera, all those great-looking ballerinas and busty peasant dolls - in fact, I'd been toying with doing a thesis on Russian females. You know - Better Bed Than Red - or something like that.

Body count: 2
Not counting the dead CIA spy William Watts and a bunch of scientists that crashed down in Russian foothills in some deluxe private charter jet. But none of this has anything to do with the operation Penetrator. At least I couldn't make a connection.

Sarena #1
As mentioned, his student Sarena is the first one. He deflowers her, and she comes back the very same night for more action (she couldn't study after THE experience). But she's not that inexperienced (she was natural) because she starts the foreplay by sticking her tongue in Rod's ass! Once finished, she concludes that "You are not to be believed! I thought you were a mirage!"

Nosha
Upon his arrival in Moscow, the commies send a call girl Nosha to his room. This "steamrolling female tank" fucks him savagely, but then he gives her the complete treatment (I reamed it, steamed it and dry-cleaned it.) that includes a couple of his famous "sex ploys". And this is where we get the only Avallone LOL/WTF trademark moment. Check this:

Things got so worked up I once mistook her right ear for the natural target but she didn't howl or pull back but considered it another innovation until I explained my muscular mistake to her.[The Coolest!]

Do you get it!? I almost missed it the first time and had to reread and decipher it. Anyway, after they are finished, she just utters, "You are not bad, Comrade. Not bad at all. In  fact, you are in a class by yourself."

"All right! Now, select your partners. Two males to one female. And let's go. Fornicate! As best or however you can. And I warn you - I'm watching - I'm taking notes - and I'll ask questions later."

Ina the Ballerina
On his way back to the hotel, he runs into Ina (torrid tomato)... who btw is the only Russian person he knows... and they end up doing the Wanton Waltz the whole night:

"Ah, Rodski - " she murmured happily as we careened around her bedroom floor. "You are Nijinsky, Nureyev - with something extra added - what drive you have! What extension!"

In limbo
Rod is just waiting for something to happen for the next three days and keeps his rod busy spending days with students and nights with Nosha.

Six Three
This idle period ends with the appearance of Six Three, his contact agent. Who has a little anatomical problem:
"I am very large down there, you see, It takes a big man to fill me, As you will see should you take on my problem."

He, of course, takes her problem on sooner as he can say Shostakovitch, and two pages later, we are treated with this unforgettable line:
IT FITS! GREAT JUMPING TROTSKY - IT FITS!".

To which he replies with yet another one of those inner-monologues spoken in Avallone language:
"Of course, it did. Pooh-pooh and tut-tut."

And the scene ends with her simple:
"Comrade Demon - I love you - "

Rod-Manya history-maker
Everything until this moment was just a built-up to Rod's encounter with the Countess, aka the Silver Hair aka Manya. So when this historic moment arrives, it is first adequately introduced:

BOOMMMMMMMMMM!
No, that's not an elephant breaking wind.
That's the sound of Rod Damon and Silver Hair meeting on even ground in the dark of a bedroom. A Rod-Manya history-maker.
A most historic occasion in the annals of the Coxman.

Then it goes on for several pages in such manner:
"- ohmylenintrotskymarxgodddd - " you are a man among men - truly, you are a might bull - ohmylord - againagain - and againagainagainagainagainagainagainagainnnnnnnaaahhhhh!"
"You're repeating yourself, Manya."
"Of course I am! And I want you to repeat yourself! A dozen times over - oh, Comrade - a whole troop of infantrymen have never given me so much pleasure - you are a marvel!"
"Thank you."
"You are welcome - come - do that once more - I tingle all over - and the itch is driving me insannnnnnnnnnne!"

But it suddenly totally anticlimaxes when Rod realises that she's, in fact, a nymphomaniac. He's appalled (She was sick for the stick, all right. And those are the worst kind!) and even gets pretty fucking mean to her:
"My baby shivers," she murmured. "Is Manya hurting him?"
"Not a chance, baby. Shut up and suck!"

Manya's punishment
And it was there, I swear by all I hold dear, that I perpetrated the most incredible love act of my life.
...Even Fay Wray got a better break than she did

In short: he fucks her to death.

Sarena #2
Similar to Had any Lately? this one also finishes with the same girl that he started with. Once he's back in the States, she demonstrates what she has learned from his books while he was away.

Dames:
Marie Antoinetta Rubinov. In a (very) condensed summary: the swingingest lady this side of a Playboy centerfold,... the most rapacious Russian nymphomaniac since Catherine the Great put a whole regiment of Cossacks through their nighttime paces,... Vavavavoom!... some mad artist's horniest fantasy...even a bishop with his Bible would burn with a fervor not precisely religious... a body of creamy white sculpture that Michelangelo might have chipped out of pure Carrara marble if he hadn't been one of the wrong kinds of boys... big, beautiful breasts with scarlet nipples that look like a bloody sacrifice on the snowy white mounds they adorn... perfect Venus...

And so on and on... And on and fucking on. But if you still haven't grasped the idea, there's her whole dossier on page 9 (interesting reading). In essence: Marie Antoinetta Rubinov, nymphomaniac extraordinaire, was the greatest spy in Russia's history.

And there's a reference to some fantastic beauty specialising in sadomasochism named (check this!!!) Legget E. Split from "Coxman #9: The Man-Eater". I guess I know now which Coxeman book to pick up next.

Title:
"Ahhhhhhh, Boris," Marie cooed, "and what is my assignment, pet?" She kept grinding away with her thighs, like a coffee-maker.
"Stop The Penetrator!" Boris panted, exerting himself mightily behind his artificial manhood.
..."- And who is that - Rod Damon of America?"
As you can see, my fame precedes me. The world knows me...

"No, no, Manya - not he, though he is bad enough - this is a British superspy. The Penetrator -"...born in London... raised in America... has a fluent command of most Russian dialects... has been able to penetrate the deepest Russian military secrets for M2 of Britain and the CIA... genius...

But Rod does know him well:
I knew all about The Penetrator. Someone who made James Bond seem like a kid playing with an erector set. Heard of him? Has the Lone Ranger heard of Tonto? Has Dick heard about Liz? Does Raquel Welch know that every man in the world wants to tag?

Although he's not very impressed a couple of pages later when he's shown Penetrator's photo:
"He looks like Woody Allen in advanced stages of tuberculosis."

Cool lines:
I'm telling you, you learn something new every day. In every way. With every lay.[The Coolest!]