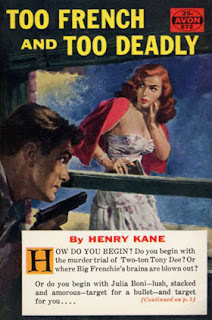 After Peter Chambers, the author it's now time for Pete Chambers, the protagonist. A year ago, I had mixed feelings about the Death of a Flack, but it was easy to reach a verdict this time around. This one pretty much sucks, I'm afraid.

It starts with an entire page of Chambers' whining about sacrificing his moustache just to impress beautiful and desirable Carlotta with dark and dreamy eyes. Of course I couldn't know it at the time, but this was a warning about how things will proceed. From the very first page, every single description of a scene, character or action takes ages... and our sleuth's constant "witty" wisecracking and sexist remarks don't help one bit.

As annoying as all this is, it is still bearable compared to the story. As we all know, the red herring is the most used plot device in mystery novels, but it reaches unprecedented levels in this one. More than once, the sequence of events doesn't make much sense chronologically (unless Chambers has at least one identical twin brother), and occasional introductions of "classical" clues are almost pathetic. Do people really write following day appointment reminders on matchboxes? Would you, for example, really pin down a short incriminating list under the Chinese light in your living room?

Enough bitching. Anyone could be guilty in this mess, so it's a bit ironic that the actual solution doesn't make sense. Henry Kane was just no Ross Macdonald.

A bit disappointing. I think it will take me at least another year to pick up another Kane's novel.

Some of the facts are incomplete because I lost half of my notes. For all the Blogger users out there: do not press Ctrl+Z while editing your posts. It won't undo your last change...

Hero:
"A wise-guy peeper," Frenchie aid. "Yeah, I know him awright. A smart-type guy. Makes with the big words and makes with a lot of them. A sharp-shooter guy."

And like everything else, it goes on and on... The funny thing is that after this introduction, Carl Dinello doesn't get mentioned again. This is probably as well since I think the whole thing is confusing enough without any "remote octopuses".

Dames:
"A dame, I hear."
"Carlotta Cain. And what a dame. Brains, class, and putting it mildly, gorgeous."

Edie Rogers - Flame-red hair and round brown eyes and a small red mouth that was puckered like a blister. She was small, with quick movements, and a figure that had launched a thousand tips. Her breasts were round, firm, pointed and protruding; her arms full, her hands and feet small.

Once more, it then proceeds for another two paragraphs with all her anatomical details and details about her wardrobe, but I'm sure you've got the picture.

There's also french alcoholic beauty Carlotta (the only cool and interesting character btw) and let us not forget his "short, squat, ugly and wonderful" secretary Miranda.

Title:
A bit of a spoiler.

Cover:
A nice illustration of a damsel in distress. There are two redheads in this one, but since she looks a bit Frenchy, I think she's Carlotta and not Edie.

Cool lines:
Counsel for the defense was panting like an asthmatic hoofer announcing the next act.

I came up out of my chair like I had a wasp gone waspish in my back pocket.

I was more fatigued than a dealer in Vegas working over-time on New Year's.

I tore out its [car trunk compartment] insides like a taxidermist with a deadline working on the carcass of a buffalo.

Tom Reeves bounced around like a pogo stick that had been crossed with a Mexican jumping bean.
Posted by Jure P. at 9:37 PM