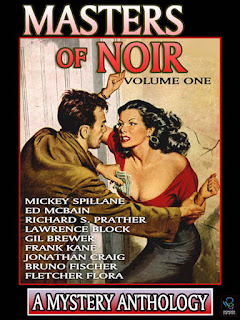 A great collection that starts slowly but gets better with each story.

Nice police procedural. All it takes for our detective is a pair of the victim's expensive shoes to establish her identity and consequently her killer. I liked its sharp style. There is no need for (too much) drama and emotions in a short story, right?


The Girl behind the Hedge (Mickey Spillane, first published in Manhunt, October 1953)

Seems like a logical decision for the editors of this compilation to shift a gear up with Spillane to follow up the pretty plain opening story. You know - throw in a bit of sex and violence. No, sir.

I don't like writing this, and I think it is slowly beginning to look like I have something against good old Mickey, but this one is horrible. Instead of private eyes, cops, gangsters, dolls etc., we have a moral story about a couple of Wall Street brokers. One good (?) and the other (surprise, surprise) not so good. A real asshole, in fact, who some time ago stole the good one's fiancé. Hence, the poor sucker masterminded a diabolical revenge plan by making the asshole desperately fall in love with a mentally disabled girl and kill himself upon realising this.

And yes, that's it. Rings a bell? I forgot most about the classical adventures I read back in my primary school days, but this resembles one of those Count of Monte Cristo romantic revenge plots. I sure hope that this is the case and that Spillane was fooling around and/or paying an hommage to some old master. But at least he stayed the classical Spillane as we know - one of his two protagonists calls this unfortunate girl a "hopeless imbecile". Fucking hell, what was this guy's problem??

More like a western but still pretty cool. Bad guy vs good guy & woman playing cat and mouse game in the scorching Mexican sun. Memorable for avoiding the obvious twist at the end.

Can a good serial killer hunt story be squeezed into a short story? Probably not. But can a mediocre serial killer hunt story full of incredible coincidences be squeezed into a short story? Yes, definitely - this one is living proof. Not all bad, and with some okay moments and a decent twist at the end. Also good to see Shell Scott being a tough guy and not just some douchebag babbling about women.

A sexually repressed wife and her cowardly (impotent?) husband go to a family picnic after the Sunday mass, where they are attacked by a gang of juvenile delinquents. Cool stuff by the master.

Now we are getting somewhere! This one is a proper P.I. mystery with mobsters, dames, stolen loot, and even a decent body count. Great story, too. It kept me guessing right until the end.

My favourite one in the collection. The bitter and woman-hating cop is fixated by the idea that the killer is his cheating ex-wife lookalike. Savage stuff, my only minor complaint would be that the apologies at the end are needless!

It's hot, and two young lovers sit by the lake. She's dreaming about Acapulco, but his mind is elsewhere:

I saw that Grandfather had reached the raft. He was sitting on the far side, his back to us, legs dangling in the water. He’d made it out there in good time. For an old man, damn good time. He was strong, in spite of his fat belly. It didn’t look like he was ever going to die.

Guess what happens next?  You are right - grandfather won't be swimming much in the future. But that is just the beginning of the story. There will be blackmail and murder, and betrayal. Excellent stuff, a bit depressing but a great choice for a closing story.

Dames:
Linda from "Carrera's Woman" is pretty cool (or should I say hot?):

There was sweetness in her kiss, and an undercurrent of danger, a pulsing emotion that knifed through me like an electric shock. She pressed against me, and her body was soft and womanly, and I forgot the marks of her nails on my arms and face, forgot that she could be as deadly as a grizzly. She was a kitten now, soft and caressing, and her breath was in my ears, and the movement of her body was quick and urgent. I lifted her, the .45 still in my hand, and carried her to the deep shadows of the rocks.


And cousin Cindy from "As I Lie Dead":

She was gold all over in the various shades that gold can take. Even her brown eyes, behind dark glass in white harlequin frames, were flecked with gold.

I hesitated before answering. “Ten G’s is a lot of money, baby.”
“I’m a lot of woman,” she answered.[Fatale]

He debated the advisability of walking around back, decided to knock.

He slammed his fist against the big man’s mouth. There was the sound of crunching teeth. The big man went staggering backward and fell across a table.
“You won’t be needing teeth where you’re going.”

I growled, “Don’t flatter yourself.”
“Shouldn’t I?” She got off the chaise longue and ran her hands sensuously over her half-naked body. “Look at me, Gus. Don’t you think I have a right to flatter myself?[Fatale]

I took the gun out of my pocket and pointed it at him, and then I saw what I’d been living to see. I saw the smooth assurance go sick in his eyes and fear come flooding in. When I’d seen that, I’d had everything from him I’d ever want, so I shot him. I shot him where I hated him most. Right in his pretty face.