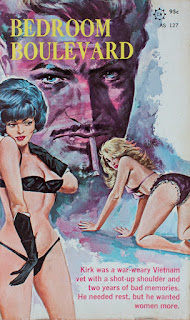 Bought this one in a pack with some other books on eBay. I had no idea who Jim Dobbins was, but I liked the cover and hoped to get some quality sleaze. Surprisingly it turned out to be quite okay, although totally un-sleazy (btw - is this even the correct expression? Chrome's spellchecker doesn't underline it in red). Hadn't planned to write a post about it, but after reading it, I googled (again, no red underlining?) the name of Jim Dobbins, and the search came up with virtually nothing. And I do think it deserves at least a short note that will immortalise Mr (or is/was it Mrs/Miss?) Dobbins on the blogosphere.

The story is built on a straightforward premise. Our hero, the marine on medical leave from Vietnam, comes to LA to recuperate from his arm wound and to have a few cold beers and hot women. The whole novel is pretty short, so it doesn't take him long to get involved with the keeper of the motel where he's staying and also to accidentally bump into his cheating ex-wife. To make things more interesting, there's also a gang of juvenile delinquents led by lady #1's nephew and shady husband of lady #2.

But all this doesn't really matter. The whole thing is just a pretext to throw in as many sex scenes as possible because our Kirk gets lucky in a biblical sense with no less than four different women. With two of them on multiple occasions.

And somehow curious thing about it is that I still had a feeling that it was leading somewhere. Even as flawed with inconsistencies and coincidences as the story is, I would still categorise it as a crime/mystery and not (just) sex/romance. Just too bad its climax is disappointing.

How perverted can you get, I wondered. Not only was her sexual desire twisted, she was a damn masochist too.

Kind of short but not sweet. Would gladly check Dobbins' other stuff, but apparently, there is none other :) 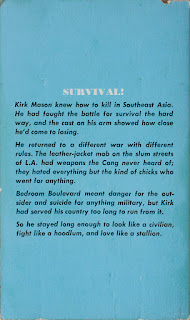 Hero:
See front and back covers for detailed (and not very accurate) descriptions. But must say I kind of liked the guy. Just an ordinary kid who is a bit mixed up and keeps confusing love with sex.

Dames:
Karen, the ex-wife (the devil) and Joyce, the next wife (the saint).

Blackouts:
He loses his consciousness almost every time he comes. But that poetic (starts went off, just like the fourth of July) crap doesn't count. However, there is one proper blackout when he gets beaten by a gang of juvenile delinquents, Nothing special (they kick him in the balls), but I really liked the way he comes out of it:

But I could see the angel, not clear, but I could see her white robe and long hair. But something was wrong. She couldn't be an angel, because that meant I was in heaven. I just never lived that kind of life, and besides, I had been told too many times to go to hell.

Cover:
Nice and exploitative as we like them, right?