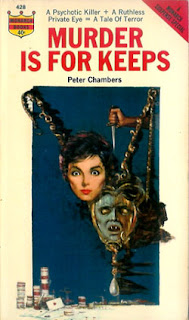 After a sort of a needless prologue this one starts as they all should. With a beautiful dame walking in a P.I.'s office and hiring our hero to do a job. No family crap, no favors for the best friend, no ghosts from the past etc. Which is cool, it's been a while since I've read a straightforward sleuth novel.

And it proceeds in this classical tradition. We have a jazz musician and mobsters (owning an illegal gambling joint of course) together with their ruthless thugs. There's a powerful politician (his widow to be precise) and even more powerful billionaire, there are more dames (most of them in distress) and a mandatory police inspector breathing down the neck of our protagonist. Also a sinister backstory involving heroin and a serial killer. I'm sure you get the idea...

It's okay but it lacks a bit of a spark. Not that it's dull or (too) predictable, it's just flat and straight-forward with a story that could use a twist or two. And speaking of twists - I think that the author actually had one planned but had eventually dropped it. I'm talking about the Lois and her involvement with Vic. Towards the end it is established that she's in love with the mobster but this all gets dropped and forgotten and then the book even ends with her taking our hero for a romantic weekend to her cottage by some lake. I guess Mr Phillips was nearing his deadline so he just wrapped it up. And so I'll do the same.

"Let me tell you something, Miss Freeman. It may hep you understand. I'm a private investigator-"
"A policeman?" she barged in.
"No. Not a policeman. Private cop. I get a licence but no badge. I have clients. People come to me with things that trouble them. I try to put the things right. You've probably heard of the breed, without having encountered a specimen before. Encounter one now." I tapped myself on the chest importantly.

"On, no," he groaned. "Not you. You know this joker?"
He turned to the first man and indicated me me with his head.
"No, I don't."
"Well take a look and try to remember him in future. The name is Preston. He calls himself a private investigator. With him that means he gets a free hand to meddle in police business and make himself a nuisance all around."

Bad guys:
Crime is like any other business. The big guys, the winners, have to possess the some kind of ruthless purpose they would need to succeed in a more acceptable profession. You don't get to be a Toreno just by exercise of muscle, there's more to it than that, plenty more.

Body count:
4 + several victims of the "psychotic killer" back on the east coast several years ago.

Moira Chase with a full "thrusting figure and dark, luminous eyes". Her stepdaughter jazz-loving Ellen whose "whole body was just emerging from the schoolgirl into the woman... with the impatient young breasts". And finally Lois Freeman - "She was beautiful, exciting, self-possessed. She was trouble."

Blackouts:
A great black blanket floated down and I pulled it over me.

Cover:
A bit of a mess, it seems more appropriate for some horror book. Credited to Lou Marchetti

Cool lines:
I took another sip of the scotch. It was the kind they all pretend they are in the ads.
Posted by Jure P. at 12:12 PM