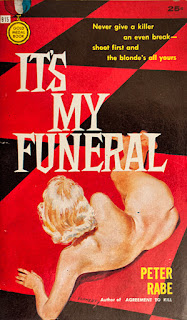 One of the best blackmail stories I can remember of. This nasty "business" is usually used to trigger some other plot, but in this one, it stays in the centre all the way through. There's no single villain - instead, we have a bunch of amoral assholes ranging from some sleazy "talent scouting agent" to the studio exec, and they all want to have a piece of our unfortunate damsel in distress. And nobody is standing between them and her but our hero. Who himself is a bit shady character...

Smart and well-conceived but unfortunately a bit sloppy in its execution. Without going into details, let me just describe how our hero breaks the case. Ella was filmed naked by a hidden camera in some hotel in the middle of nowhere (half a day driving from L.A.) several years ago. By some divine intervention, Daniel's new flame Tess is now singing in that very same hotel and staying in that very same suite. So when he comes to visit her and just before they get down to do you-know-what, he gets his Eureka! moment when noticing that the large mirror in the room looks very similar to the one in the incriminating film. He breaks it, and sure enough, there's a guy with a camera behind it.

But it's not just the story holes that bothered me. The whole thing is a bit dull, the characters are unconvincing, our hero's relationship with Tess is not entirely believable, and his motivation is vague. Is he simply after the reward money, or is he on some sort of a Marlowe-esque pursuit to save Ella's honour? And the funny thing is that she's not concerned with that damn movie in the first place. In fairness, there's no reason why she should be since that film is hardly a smutty porn reel. It's just about her being naked and going to bed. Alone.

A bit of a mess. Shame, it could have been really good. 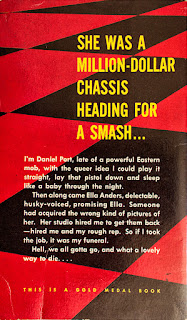 Hero, object of desire, dames, title:
see the back cover

Blackouts:
Two of them, both rather forgettable:
- He got sapped from behind and passed out.
- Port tensed with fear. His body relaxed only when he passed out.

Cover:
Amazing one and definitely on this blog's top 10 covers so far. Just love the symbolism of Ella being a pawn on the chessboard that everyone keeps pushing around. And it doesn't hurt that she's naked either, does it?

The author is not credited, but according to the goodreads.com website, it is work of John J. Jr. Floherty.

Update, May 2017:
Came across this amazing post in which the author is identified as Jack Floherty Jr

Notable cover blurbs:
Never give a killer an even break - shoot first and blonde's all yours.
But as cool as it sounds, it's totally untrue (see 'body count' section)

Cool lines:
There was no air in the car, just mistrust. They breathed it, they sweated it, they heard it creak with the slightest movement.
Posted by Jure P. at 9:41 PM