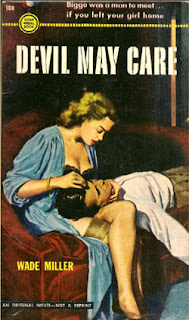 Another one that gets ruined straight away by its far-fetched premise. A guy is hired to deliver a letter from Cleveland to Mexico for the reward of $10k. Not sure about the US p&p expenses back in 1950, but this seems a bit extravagant, doesn't it? And here's the best part: the recipient of this letter will reveal himself to our hero using a secret signal. Which is - and I quote - anything connected with peacocks.

Huh? But at this point, I was still intrigued, not really concerned. After all, sometimes such quirky plots come alive and evolve into something substantial and (more) digestible. Not this one, I'm afraid. When I reached the end of the 12th chapter, I knew it was doomed:

He felt possessive. All of a sudden it rushed into his mind how vitally important she was to him and he sat up, wondering. He said aloud, "I'm in love, by God!"

So, yeah - our hero falls in love with a virginal queen of siesta (half his age btw). And then he snaps out of it, gets drunk and in frustration or denial or whatever the fuck tries to rape the other heroine. Jinny obviously isn't exactly thrilled by this savage act, although she overcomes the assault pretty quickly, and it doesn't take long for her to fall in love with Biggo. And so on. And on and on. Slowly and not exactly surely.

When this feathery signal finally comes, we get some action. And are treated with a LOL moment. Biggo is armed with some ancient spear that he nicked at the bar, and he starts chasing the villain but is too stupid to notice that its point fell off during the pursuit. And did I mention that he is a hardened soldier of fortune? And did I say that his adversary is armed with a gun?

Wanted to like it but just couldn't get into it. Too melodramatic, dealing with the usual subjects (two lonesome outsiders finding each other, loyalty between friends, the ageing guy who wants to get "out",...) in a pretty dull and uninspiring way. Not much of a spark. It feels like it was penned out quickly to fulfil the contract with the publisher.  And definitely too long. It might have worked as a novella or short story, but 180 pages were simply too much.

Hero:
Biggo Venn,  soldier of fortune for the last 10 years. And since this was published in 1950, it made me wonder where/when the hell were the mercenaries deployed during WW2?

Anyway. Back cover describes him as "Fast-talking, heavy-fisted Biggo - fast with a small cannon, fast with a buck, fast with a girl." Understandably, they don't bother to mention that he's not particularly smart, resourceful, or polite.

His description on the front cover is not much more accurate, but it is definitely more cool-sounding:
"Biggo was a man to meet... if you left your girl home."


Location:
Starts in Cleveland but then quickly moves (and stays) in a small Mexican town called Ensenada.

Body count:
4 (although I was a bit reluctant to take the last one - heart attack - into account)

Object of desire:
Confession letter that would incriminate one gangster, so another gangster tries to prevent Biggo from delivering it. Or something like that.

Dames:
Jinny: Her face looked vaguely disappointed with the way things had gone. But there was nothing disappointing about her figure.

The queen of the fiesta Senorita Pabla Ybarra y Calderon: She was the most beautiful Mexican girl Biggo had ever seen, an ethereal combination of Spanish nobility and Aztec royalty.

Blackouts:
He gets doped and rolled by Jinny on their first night together:

Why was she watching him like that? But he was too tired even to think about it or to feel the floor as he toppled forward.

Title:
Must admit I wasn't familiar with the devil-may-care idiom. I know what it means now, but I still cannot connect "a very casual attitude; a worry-free or carefree attitude" to anything in this book.

Cover:
"I feel sorry for us, too. You know how to fight but I don't. You know what we are? We're outcasts." She nuzzled tipsily against his collarbone. "I don't want to be one. I don't want to fight. Oh, Biggo, who wants us? Who'll settle for us?"

He had been searched hastily and his wallet had been tossed aside. Biggo fumbled with it. The money was still in it. He didn't take it back because it was so bad dying, much less dying broke. Toevs wasn't a bum: no reason he should look like one to anybody.
Posted by Jure P. at 10:47 PM