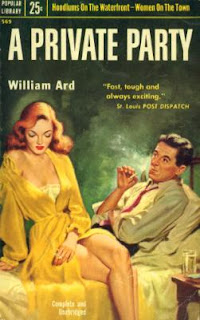 Kind of weak and a little far-fetched premise (P.I. hired by the bad guys), but I liked this one anyway because it still felt very realistic.

Instead of the mob, our hero simply deals with a corrupt bunch of trade union hoodlums (or something like that). Cops are not just some clueless bystanders; they are actively involved. In fact, I would dare to say they get an equal share of the ink as our hero. There's an inspector, and although he and P.I. Dane do cooperate, they are far from the best friends. Women are beautiful and sexy (small boned too - see the facts) but far from overly stereotypical (Ann freely admits she won't be able to withstand Dane's questioning). There's also a great and believable backstory about the shenanigans between the various law enforcement branches and politics that lead to the fuck-up on which the premise is built. Cool stuff.

Written well, too, keeping the steady pace and nicely steering between melodrama and more hard boiled-ish stuff. Told in the third person changing the focus on several characters that action is concentrated around, with some facts revealed in flashbacks (like newspaper articles). Good ratio of dialogue vs action, descriptions with just enough of the required attention to detail (to be honest, maybe some - like Roxy going to the beauty salon- are a bit redundant).

Too bad that the ending sucks. It finishes pretty abruptly as if the author had reached the word count limit (although it's only 120 pages long). A bit of an anti-climax, especially with that cop non-selfish sacrifice nonsense...

But I liked the style a lot and will definitely check out other Ard's stuff in the future.

Hero:
"No. I said I was Timothy Dane from New York..."
"A snooping newspaper reporter!"
No," said the one who had entered with Purdy, "Just a hustler. They call themselves private detectives."

Dames:
Roxanne Garde aka Roxy:
A very beautiful woman, a redhead woman... Her face was small and delicate, clefted at the chin, with full, sensuous lips and wide-set green eyes whose dominant expression was appraisal. She was tall bodied, with long legs, tapering waist, extraordinary breasts.

Ann Bogan, extremely pretty and endowed with generous physical attractions:
Short and small boned. So short, and so perfectly proportioned, that her waist could truly be surrounded by a man's two hands and her 32 bosom looked pert and more than ample to men and women alike.

Title:
The initial killing takes place at some private party.

She uncrossed her legs, rose out of the chair and stood close to him with what Dane thought was a single, fluid motion. Her scent assailed him, made him more conscious of her basic femaleness than he could remember. And more aware of his own manhood.
Posted by Jure P. at 9:13 PM