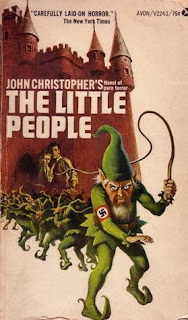 Far from the "pure terror" promised in its full title and even farther from this blog's usual crime stuff, but The Little People deserves an honorary post for its crazy cover. Nazi Leprechaun exploitation! The very moment I saw this illustration in some online article (which I cannot find now, goddamn), I went on eBay and scored a copy. I just love being seduced by such preposterous artwork!

It had been sitting on my "pretty high priority" bookshelf, waiting for the right moment, and I finally decided to check it out for this year's St Patrick Day. Seemed appropriate for obvious reasons. Also, Paddy's day is a national holiday here in Ireland, meaning we have a work-free day which it looked like I'm gonna need as this thing has 200+ pages of pretty small print...

In the end, it took me more than two weeks to finally get through it! I don't usually read two fiction books simultaneously, but in this case, I think I put it down twice to read something lighter and then resumed with The Little People. Those 200+ pages (remember - of pretty small print!) don't contain much dialogue, and the whole thing is written in the semi-archaic English language that can be very difficult to follow for a non-native speaker. And the fact that there's no "pure terror" in it didn't make things easier.

Not saying it's bad at all. It's just not my cup of tea. The premise is interesting (a group of people finds these pathetic little creatures) and pretty sad (nazi experiments...) with some interesting ideas thrown in  (like how to preserve their human rights). Still, everything takes ages to start and complete. There are pages and pages of semi-philosophical crap intertwined with way too much personal/family shit to keep the reader focused. At least this reader.

Funny enough, there seems to be a place called Killabeg House in Ireland, but it is located in county Wexford, not Mayo.

Should also probably mention Bridget since she and her fiancee Daniel are the main non-little protagonists. But in a typically English conservative tradition, we just learn about her secretarial qualities:

Cover:
See the 'Hero' and the 'Title' sections. Illustration credited to Hector Garrido.