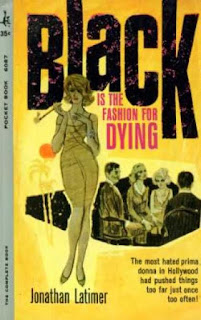 Starts very promising. Without going into details, let me just quote the ending of the first chapter:

But then it just starts to build up a classical whodunit. Page after page of a pretty monotone narrative is spent on establishing the cast, the setup and our first victim. But with not exactly subtle hints like "“...that’s Hollywood’s favorite pastime...planning how to kill Caresse", it's not much of a surprise when poor Caresse is killed. True to the formula, murder happens on a set during a movie shoot, and again we can see it happening a few pages beforehand (a bit naive stuff with pistols and bullets as the props). But just in case we still didn't get it, Mr Latimer reminds us that we are now in a locked-room type of a mystery:

Oh, well. I nothing against the good old fashioned mystery every once in a while. Only this one turns into an amateur detective type which is really not my cup of tea. And to make matters worse, it turns into two(!) amateur detectives type with Gordon directing Blake from his hospital bed, so the damn thing becomes reminiscent of Nero Wolfe/Archie Goodwin cosy mystery. To make it an even bigger mess, a bit of The Fugitive is thrown in. For no good (or at least credible) reason, our amateur sleuth #1 decides to run and hide from the police chase only to appear the next day in a big surprise (huh) revelation scene that takes place nowhere else but at the Oscar awards ceremony! I kid you fucking not. So much for that famous "warehouse, farmhouse, henhouse, outhouse and doghouse" search. But then again - cops don't play any significant role in this one. They are just observers of the "backward school of detection" method copyrighted by Gordon and practised by Blake.

Wanted to like this one so Mr Latimer would have a more favourable opening entry on this blog but was struggling to get over the line. It just dragged on and on... Not noir-ish, not hard-boiled, not even decently suspenseful. It felt like all the effort was spent creating an authentic H'Wood novel with a convincing atmosphere around the movie-making industry and its eccentric people. And that aspect definitely works well, but unfortunately, it is the only one that works.

And one last thing before I finish. You wonder what happened to that naked beauty from the opening chapter? Hate to disappoint you, but nothing much really - she disappears and is later found dead. Turns out that her sole purpose was to distract our writer hero so that the bad guy could sneak into his house to take a peek at the scene he had just written... Surely there are easier ways to get a dude away from his typewriter for a minute?

Body count:
A bit hard to do a proper count. Definitely a couple that I have already mentioned, which, together with a culprit's death, makes it 3. There's also a poet (and occasional screenplay writer) who died in the past (but it's not explained whether it was a violent death) and an actor who committed suicide. Irene, too is excluded from the grand total since she only dies momentarily when hearing some shocking news over the phone ("The phone was dead. And so was she.")

And of course, Caresse: "...conniving, murderous, lying bitch, a jet-age Lucretia Borgia.":
Forty-five, if she was a day. A star for nearly thirty years. Five marriages, a telephone book of lovers, scandals, disasters, triumphs, and she still made carhops of the Mansfields and Monroes.

Cover:
The eBook comes with a pretty dull cover, so I took one of the old paperbacks. Not sure about its author.