The Ever-Loving Blues aka Death of a Doll (Carter Brown, 1961) 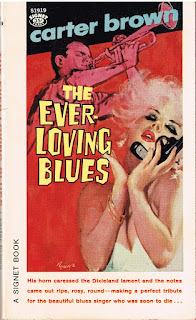 I assume this one was initially meant to be Carter's H'wood novel. Because for some unexplained reason, the big shot producer Guggenheimer (!) hires our man Danny Boyd and flies his gumshoes all the way from New York to California. The usual type of assignment - it's gonna be yet another case of finding the missing starlet.

Her name is Gloria Van Raven (!!), and Danny's job turns out to be trivial. Studio execs send him to interview Gloria's secretary April Showers (!!!), and he gets the lucky break immediately. During his visit, Gloria phones April, informs her that she's enjoying herself on some yacht in Florida and asks April to bring her some clothes. Danny promptly recruits April as his assistant (or something like that), help her pack, and they are off to the east coast.

All this happens by page #10, and around this time, I started to raise my eyebrows a bit. True, Mr Brown was Australian who, according to Wikipedia, had not visited the states very frequently, but surely he must have known about the private detective jurisdiction? You know - the thing that cops and/or district attorneys always bitch about and threaten our private detective heroes with. And when you think about it, this whole thing doesn't make much sense from the pure logistical point of view, either. I mean, wouldn't it be more simple to send Danny directly to Florida from New York? And surely it would be much more economical for Gloria to simply buy a couple of bikinis and not bother her girl Friday to fly a suitcase of clothes all across America? Especially because she (1) intended to stay on that yacht for only five days max, (2) was broke, and (3) didn't wear much clothes anyway...

But what the hell. Brown was contracted to write two novels and an additional short story each month (!?!!), so, understandably, he couldn't pay attention to every single minor detail. Let's move on.

The plot thickens... but unfortunately not much. Seems like Brown ran out of steam by making up all those ridiculous names and neglected the story a bit. Because it literally doesn't move anywhere, our cast is confined in cabins of some small town called Bahia Mar for the rest of the novel. There is not much action worth mentioning except a pathetic (probably meant to be funny) attempt to reconstruct the murder.

So it's a bit like Agatha Christie setup once again. With an inevitable suspects round-up and spectacular and surprising final whodunit revealing act. And spectacular indeed is! Danny manages to fuck it up even more than he did in The Sometime Wife. Again he forgets to disarm the culprit, and this time his ignorance results in a couple of fresh kills, one by a decapitation! Crazy stuff.

Nice, quick read, although a bit too goofy for me.

3/5 (Adding an extra point for the hilarious characters names)

Hero:
"So you're Danny Boyd," he growled. "The real smart operator from the East Coast who can fix anything - for money."

And let us not forget about his profile:

"I'm Danny Boyd," I told her slowly, giving her plenty of time to catch the profile's full impact. "From the studio."
"It figures," she said pleasantly. "Only an actor talks to you sideways to be sure you don't miss it. How's the left view? Just as stunning, I bet."


Location:
Starts briefly in Hollywood, but then the action moves to Florida to a fictional (?) resort/yacht harbour called Bahia Mar:

Bahia Mar looked like every guy's dream of how to live after the Bureau of Internal Revenue has made that glorious mistake and added five zeros to your ten-dollar refund check.

Body count:  4
Object of desire:
Guggenheimer sighted heavily. "I wouldn't worry about Gloria, only every time she makes a new picture, it never makes less than a three million gross at the box office. It's not the dame I care about, you understand, Boyd? It's the money."

Dames:
Gloria Van Raven - "redhead built with the exuberant generosity of a Renoir painting..." with "twin peaks of her Junoesque breasts..." who "reminded me of a still from the French movie that gave one of the South Dakota censors a coronary occlusion last year."

And finally, Ellen Fitzroy, the nightclub singer - "A tall brunette... the full curves... her strong white teeth making a brilliant contrast with the dark tan of her body."

Blackouts:
I got struck by lightning. It hit in back of my right ear and the whole world exploded, hurling me way out into a black, bottomless void.

Title:
"It's his own composition of course," Valdez said slowly. "He calls it 'The Ever-Loving Blues'."
"They figure a jazzman's no-good unless he's unhappy," I said, "and the real top men suffered all their lives. If the quality of that composition's any standard, Mullins must be the unhappiest guy on the whole earth!"

Cover:
Jazz and babe - the winning combination. But only half accurate. There's a trumpet player in this one, but there's no scene with April (remember - she's the only blonde one) holding a gun.
Beautiful illustration. The artist is not credited, but I'm pretty sure it's the work of McGinnis.

"Where was she last seen?" I asked
"Check with her girl Friday," he said curtly. "She's a nice girl."
"Here - in Hollywood?" I stared at him. "You're kidding."
Guggenheimer suddenly looked tired. "I got gag writers I pay for that kind of corn, Boyd."

"You must be April Showers," I said between my teeth. "What was if before? May Schmaltz?"
"If it was to trade insults, why didn't the studio send a writer?" she asked curiously.
Posted by Jure P. at 9:45 PM