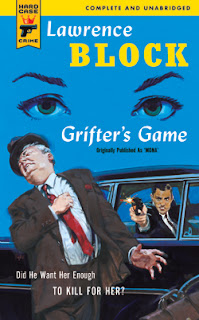 At first, I thought this one would be memorable for the main hero's simply incredible naiveness bordering sheer stupidity. It takes 146 pages and an old Hitchcock movie for our poor sucker Joe to realise that  things are not exactly what they appear to be:

But I'm glad to say that instead, it will stay in my memory for its excellent ending that I didn't see coming at all. Needless to say, Joe gets screwed over by the girl, but his payback is really something. Without giving away too much, let's just say that there's a reason why Mr Block brought that (initially a bit nonsensical) heroin stuff into the story. Original conclusion indeed. Nasty, grim, disturbing and fatalistic. The way I like them.

All in all, nice take on the ever-inspiring theme of "old rich husband, young unsatisfied/greedy wife".

Hero:
Joe Marlin, a con man. Although it needs to be said that he comes across more like a gigolo who specialises in skipping luxury hotels without paying the bills.

Title:
A bit misleading one. Like I said, Joe is more like a gigolo, he's certainly nothing like Paul Newman/Robert Redford kind of a grifter, and his "game" is simply killing some old dude from a point-blank distance. But I guess "Grifter's Game" sounds much better than "Gigolo's Assassination".

Cover:
Nice illustration by Chuck Pyle. It's pretty accurate, too, as it depicts the killing of Mona's husband in a drive-by shooting. I liked the touch with her eyes overseeing the whole scene from the background.