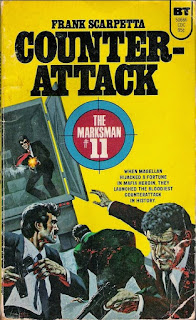 I'm far from being an expert in men's adventure novels (come to think of it - I'm not an expert on any kind of novels), but I'm 100% positive that something is definitely wrong with this one. Doesn't feel like a finished product at all. It's more like a bare manuscript that the author would pitch to a publisher and then complete quickly after approval. While having a drink or two, probably.

Starts somewhat ambitiously with a complicated plot that involves five crates of heroin smuggled from Egypt (poppy fields in a fucking desert?) into America. So what's ambitious about such trivial plotting, you might ask? The thing is that these crates were intercepted by the US customs (and/or some secret UK agency) and then stolen back by Mafia before finally, our man Magellan got to them. Their content changed from heroin to marijuana to a pile of bricks and even sand during this period. All this enfolds really fast, and I admit that I lost track a bit. But to my defence, it seems like Mr Scarpetta too got a little lost, so he, fortunately, stopped fooling with this nonsense and made it clear that they indeed do contain heroin (worth $650 million) and that they indeed are in Marksman's possession.

From here on, it settles a bit, but it again goes totally wild in an abrupt ending. Only a few pages before the conclusion, another girl is introduced (and immediately forgotten), and then the final shootout happens on the very last page in no more than four (4 !!!) paragraphs.

You can, and you should read a proper and super cool review on the one and only Glorious Trash blog. I'll just abruptly finish mine with a quick summary:
At least it's short. But it's so weird it's hardly funny.

Body count:
7 (one single kill and a couple of triplets)

Object of desire:
He had one thought! To personally wipe out the narcotic traffic here and, in process, blast open the immaculately kept secret of who masterminded the formidable crime organization whose headquarters was in New Orleans.

Dames:
Chantal, Choisi's daughter. Her role is very mysterious and never quite explained...

Title:
I wasn't sure about this. I thought initially that Marksman was left with some score to settle with Mafia from one of the ten preceding volumes or that he was still revenging the death of his wife and daughter. But no, the back cover informs us that "Summoning the enormous power at his command, Borghese launched a blistering counterattack to recover the smack and wipe-out The Marksman."

Cover:
One of the mentioned triplets killing. It's cool but inaccurate because I'm sure that the Marksman did both of them disguised into a hippie outfit.