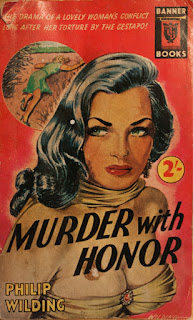 Kicks off as a blackmail case that our hero solves swiftly in just a couple of chapters by kicking the shit out of the bad guys. In the build-up to this scene, we learn about some Nazi conspiracy and pretty soon after, there's a jewels theft (you know - "a new angle") followed by an inevitable corpse.

So lots is happening, and I liked some of it. The plotting is decent, the characters are colourful enough, it has that lovely old fashioned feel about it (Heathrow airport is still called Heath Row), and it's pretty fucking hard-boiled considering it was written in 1960.

But it just doesn't work, or at least it didn't work for me. Nothing major is wrong with it, but the sum of minor flaws exceeds the summary of cool things. All that Nazi crap is totally redundant. Hero is a bit of an asshole - he's one of those "know all" types (for some reason, he keeps tampering with evidence). He also seems to have a sixth sense of determining someone's guilt based on the first impression of them that he gets.

Also written poorly. Some of the dialogues work, and every now and then, there's an occasional hard-boiled-ish flash (see 'cool lines' below), but mostly text is dry and dull (for some reason author needs to go into great detail about how people are dressed). There's a scene in which captured Crane is rescued by his sidekick Red, and the whole rescue operation takes 10+ painfully boring action-less pages describing every little detail but without a single line of dialogue. Wouldn't it be better and more efficient to just fast forward this crap and then maybe later have Red or Crane do a quick recap?

There are some cute moments (the main villain is referred to as "Herr Leader"), but there are also many nasty ones. Italians are called wops, women are sometimes bitches and so on.

I don't know, nothing is horrible, but everything is far from good. It was a bit of a struggle to finish those 150 pages of small print. Herr Leader does manage to escape at the end, so I can speculate that Wilding resurrected him again. But I don't think I'll bother finding any more of his stuff...


Hero:
She read the card and stared up at him wide-eyed. "Nicholas Crane, Private Investigations? Then you - you're detective?"
He nodded. "Keep it under your hat, Gladys," he said, thinking this would be most unlikely.

Vittori went pale, "The Police?" he gasped.
Winthrop knew better. "He's no copper," he sneered. "He sounds more like a G.I. who's lost his way home."
Crane said: "Shut up, Pansy!"

Body count:
7 - including real Robert, who had been bumped by Nazis during WW2 but excluding two "seriously injured" wanna-be Nazis.

Discovery of Lucy's body is pretty funny: "He bent down and touched her face and noticed the patch of blood on the breast of the suit. The dame was stone cold. Lucy d'Avigne had been killed!"

Dames:
Bunch of them. We have a french maid who is a "tasty dish", Terry Logan who "was a hot number whichever way you looked at her" and - definitely my favourite! - Crane's secretary Betty, who speaks in super cool street-tough slang. But they are all over-shadowed by Honor d'Avigne! Every single fucking time she appears, the entire following paragraph is padded with detailed descriptions of her dress, radiant beauty, intelligence, devotion to France...

Blackouts:
He almost faints during the first fight:
Crane began to see a red misty curtain before his eyes... Nick Crane's brain tried to convey a message to his body, but it would not respond... [after taking a couple of shots of Scotch] the room went round once, and then came back right side up.

And later there comes the proper blackout:

He was half-way into the big room when it came. He had not heard a sound. It was very quiet. Too quiet. A crashing blow behind his ear send a thousand star-spangled pains through to his eyes. A great red wave that changed rapidly to black engulfed him, completely obliterating any interest in the outside world.
Crane had been sapped as easily as a third-rate amateur.

Nothing special, but I liked that "third-rate amateur" conclusion.

Title:
A bit silly words play. You do get it, don't you? Honor d'Avigne, honor...

Cover:
Honor d'Avigne in front and her murdered sister Lucy in the back

Cool lines:
"Listen, rat!" he said. "I'm going to take you apart and find out what makes you tick. Afterwards I'm going to clean this joint up and take back the jack, or what's left of it, to Honor d'Avigne. The dough you've been high-jacking her for over the last year."

But if some observant character should glance that way it would look like a parked car belonging to a necking couple who had gone off into the woods to find out whether they had anything in common.

He stood in the darkness and mediated. Not on infinity, but on an immediate line of action.
Posted by Jure P. at 11:29 PM